Opening the Kimono on Natural Language 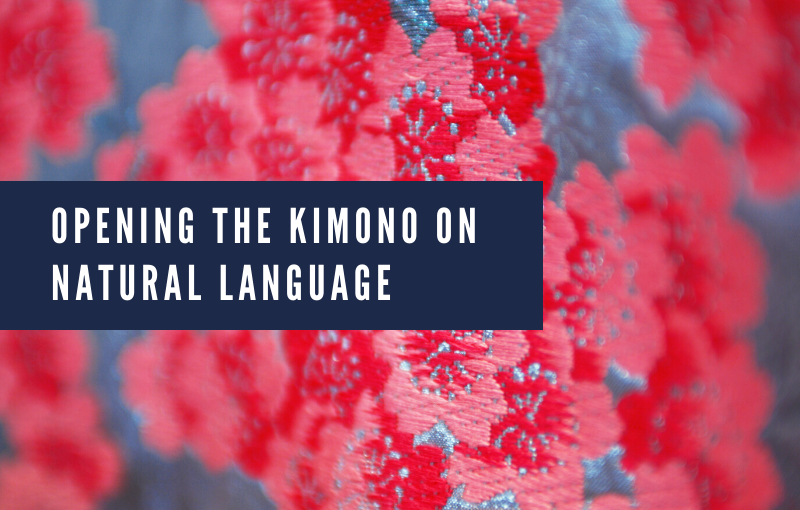 Opening the Kimono on Natural Language

The working world is rife with clichés, repeated ad nauseam in meetings, thought leadership, and the like. You hear things about peeling back the layers and thinking outside the box. You get advice about why you should always be closing even when you don’t work in sales, why you should run things up the flagpole before you circle back and avoid boiling the ocean in favor of going for the low-hanging fruit.

Because if all else fails, you can always do more with less because, well, it is what it is. Raising the bar that frequently is downright exhausting. Not to mention, people don’t actually talk like that IRL (cough, in real life).

For sourcing and recruiting, this is an important distinction, given the rise of natural language processing. For anyone unfamiliar, NLP is the computer’s ability to understand human language as it’s spoken or written. It’s commonly associated with artificial intelligence, though the concept behind natural language relates to several other disciplines.

In recruiting specifically, natural language dates back years and years to include discussions around semantic search. For as long as sourcers and recruiters have used computers to try and find candidates has the way humans that talk and think played a role in the process. It’s only recently that became tied into automation.

Here’s how it all works:

For starters, let’s spend another moment or two on the idea of natural language. What this really means is the ordinary language that people use. Unlike controlled or constructed languages, natural language is ever-evolving and shifting, influenced by individual factors as well as regional and global ones.

It is what makes a candidate born and raised in one locale that much different from one who moves frequently. It is also subject to change based on one’s immediate surroundings like the everyday clichés mentioned earlier. Few of us talk to our friends about breaking down the silos while out at the bar.

NLP attempts to take the wild, unwieldy words and phrases that people use and examine the information provided. Because computers are machines, the “process” means encoding natural language into a form that the computer understands.

Along the way, it looks at multiple factors like speech and discourse, as well as syntax and semantics. It’s looking at word choice and part of speech and running sentiment analysis to figure out if what a candidate said is what they meant. Do you remember trying to diagram a sentence in school? That’s what it’s doing.

As a result, the technology is able to process large amounts of data efficiently, while picking up on patterns in a way that humans might not.

Reverse engineer NLP and you start to get new applications like Siri and Alexa. A few years back, the whole space got flustered by the idea that someday they might source candidates using a voice assistant. But as Tim Sackett of HRU Technical Resources put it, “Anything is viable to recruit, but is it realistic? People keep telling me they recruit off Twitter, but realistically what percentage of hires do we really hire off Twitter? Almost none. ‘Siri, can you find me a Java Developer in Kalamazoo, MI?’ Maybe she’ll be able to, but I’m doubting it will ever be a serious source.” He’s not wrong.

Where NLP does provide a serious source is chatbots. Those tiny little computer-powered popup windows that think they talk like a human. Maybe you can tell the difference. Maybe you can’t. Some have cute names, while others come with shiny, happy faces.

What you don’t see are the algorithms, sifting through the data collected, growing smarter and more sophisticated as a result. Leveraging another NLP method known as knowledge resources, chatbots can store information in an ontology. That’s a fancy way of saying they know how things relate. So, if a candidate tells the chatbot that they have X degree and Y skill, it determines that they might be a good fit for Z job.

This is just scratching the surface of NLP and its many uses. Like a lengthy Boolean search, it’s possible to write rules and redefine what natural language means before it even reaches the computer. For sourcing and recruiting, NLP is still in its infancy. Maybe one of these days, someone will develop a fantastic voice assistant app that can garner more than a few two-star reviews.

Until then, it’s important just to know what natural language is and where it sits in the recruiting landscape, both for manual sourcing and automated initiatives. Par for the course.