Unleash 2018: The future of automation and talent acquisition

Automation was a big topic at Unleash 2018, for sure.

Everywhere you turned, it seemed to be part of a panel, or being mentioned on the vendor floor.

My RD partner William Tincup was on one such panel, entitled The Robots Are Out to Get YOU! The Positive Impact of Automation on Recruitment. Here was the blurb on Unleash’s site heading into the conference:

“Siri, which of my technical recruiters has the best track record in hiring top engineers that are engaged with the company?” Sounds kind of far fetched right? Well, yes and no. It’s not flying cars on Mars and it’s also not common place for today’s HR & TA leader but we all feel the anxiety that this or something like this will become commonplace. Our panelists are doing some really cool things with automation. During the panel we’ll explore what’s working, not working and where they feel this is all heading. Please join Robin, Johnny, Lars and William.

Since “automation” is kind of a scary term to many in talent acquisition — are our jobs at stake? — let’s parse this out and look at the positive elements herein.

Automation concepts are NOT new

Now we’re at an interesting place. Like PCs in the early 1980s or the Internet in the early 1990s, artificial intelligence is “out there” and people know about it — Tom Cruise and Will Smith movies, for one — but it hasn’t impacted businesses just yet. (Well, not most businesses.) Prominent Silicon Valley executives, like Sam Altman of Y Combinator and Elon Musk of Tesla/RocketX, are beginning to do more around AI — including being scared of its potential ramifications.

I am not here to talk about robots taking over the world or our souls, which likely won’t happen in the lifetime of anyone reading this article. But automation is already impacting the recruiting space.

What are some of the benefits?

At this time, most are time-saving, top-of-funnel approaches to sourcing, scheduling interviews, and screening. There are various vendors out there, almost all of them with a presence at Unleash, that can help you with the top-of-funnel stuff to make your TA team more productive in terms of developing proactive candidate pipelines.

The problem is that most recent studies indicate that Bullets 2-5 (sourcing to conducting interviews) are taking up 65-70% of most recruiter’s time. Look at some of the bullets that are thus getting significantly-less time: relationship-building, working with hiring managers, moving towards onboarding, etc. Those are more value-add tasks — when you see the famous stat about more than half of employees looking for a new job within six months, for example, that’s almost always because of a poor hand-off from talent acquisition to onboarding. We could fix those things, but we lack the time.

Automation gives us back that time. That’s a huge benefit. What is work except effective time management, honestly?

The value of these proactive pipelines

But the best personalization experts you could get for this role are likely already essentially gone because they’ve already been in discussions with recruiters who are ready to pounce when they have approved headcount.

The best recruiters — and on the agency side, the ones who tend to generate the most money — build proactive pipelines. They email candidates when they don’t have a position. They work trade shows. They work hotel bars at conferences. They lean on people they’ve placed before to find A-level colleagues and then take them to drinks, coffee, or lunch. They are always building out relationships pre-role. Then when the role is available, they know who to go to. They save tons of time on screening and sourcing activities in this way. They jump ahead several levels.

The project manager that needs the hire is happy. Whoever controls the budget is happy. Everyone is happy.

Look at the blurb for the panel again

Look at the first sentence:

“Siri, which of my technical recruiters has the best track record in hiring top engineers that are engaged with the company?”

This was an interesting one. See, time was, if you wanted to pull recruiting metrics on your team and figure out who was doing the best and bringing in the most-engaged candidates with the shortest time-to-hire, etc… that was a relatively complex, almost-entirely-manual process that could take 1-2 people weeks to put together. Then you need to get a meeting together, another meeting to analyze it, and before you know it, almost a full quarter is gone. You haven’t recognized your top recruiters, you’re onto focusing on something else, and eventually your best TA peeps are disengaged and looking for their own next step.

With automation, you can literally stand in line at Starbucks and ask a personal assistant to pull up some of your recruiting data from wherever you keep it. You can know before your grande who has the shortest time-to-hire, whose hires have the longest tenure, whose hires report out as more engaged, etc.

This is a monumental shift in how we use recruiting analytics. Again, there’s a time factor. No one is spending weeks on a complex Excel doc for the TA leader and the C-Suiter that the TA leader reports to. No, it’s all there via voice and personal assistant. It’s real-time too. There’s power — and time freedom! — here.

Helping us address the skills gap

Look at some of the numbers on this slide from McKinsey in another Unleash panel: 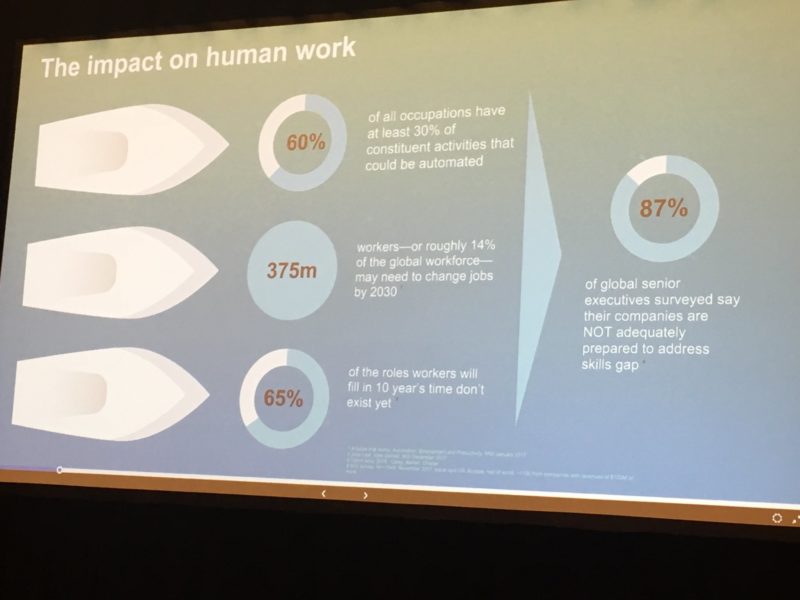 Pay attention to these two:

Automation within recruiting is going to help close that skills gap, both through reducing time on task/process work, better access to information (and faster), and more streamlined managing of the hiring funnel.

How about candidate communication?

The No. 1 complaint about almost any hiring process — and what kills candidate experience at most places — is lack of communication, updates, and feedback from the company side. This is sometimes called “the candidate black hole.”

In fact: Software Advice’s research found the top complaints candidates have about the recruitment process are:

3 of the 5 above are about communication.

From the same research, these were the top requests of job seekers:

4 of those 5 are about communication.

In the era of Glassdoor and similar sites, candidate will talk about how bad your communication is. That’s bad candidate experience, which is bad employer brand, which hurts your ability to get the best talent in a competitive market. And most of us are playing in competitive markets right now.

Use a chatbot. This means that front-end, top-of-funnel hiring discussions are happening with robot and the process is more frictionless (less emails back and forth about scheduling a call); this is attractive to tech talent.

Also use text. Text is a powerful tool in the candidate experience ecosystem. Most people read and respond to texts within about three minutes, and that’s becoming increasingly normative with younger job-seekers. They may go hours without checking their email, but if their phone is on them, text can be much better in terms of response time and relationship-building.

Both chatbots and text programs are examples of recruitment automation, and again, vendors galore on both at Unleash.

Josh Bersin in the house

Bersin gave a keynote near the front end of Unleash and had a few big takeaways, but one of them was that automation won’t take all TA’s jobs — it’ll make them more effective. And we’re already starting to see that. We’ll just continue to see it.

Now, yes, there will be some companies that look at automation, think “Recruiting isn’t revenue-facing,” and use automation tools to axe recruiters. Those are myopic companies that will eventually lose in the long-run because the human side of the experience won’t be there, and competing on solely cost (which is what you’re doing when you automate out people) only works well in short-term contexts.

Your job is safe. It’s going to get better. The signs were all over Unleash.