Sourcing Your Way To A New Job Through Social Stalking 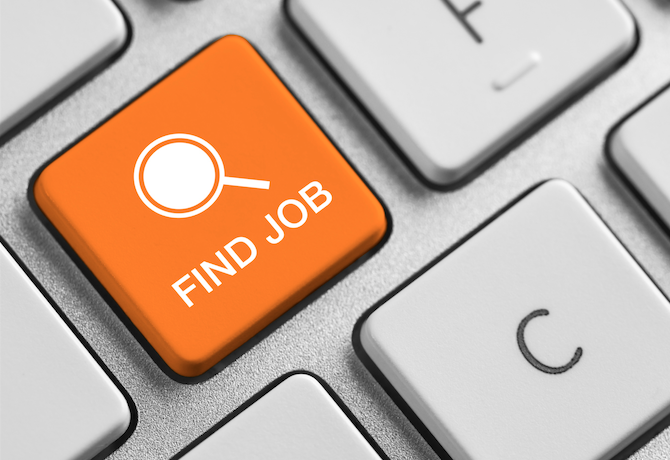 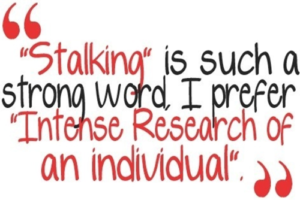 Recruiters talk a lot about ‘candidate experience,’ but here’s a chance to actually get feedback (or at least get noticed) if you’re a job seeker.

This is a real life example, so my apologies to my target, but again, all information here is publicly available.

For this exercise, I went looking for potential examples on Twitter – and thought it might be interesting to actually feature a recruiter from Twitter itself – who, coincidentally, proves that even recruiters at social networks don’t really use them for social recruiting.

I clicked this link, which took me not to the slick, professionally polished official Twitter careers page (the kind with all the shots of multi-racial team members in cubes), but instead, to a minimally branded, bare bones page from Jobvite, Twitter’s ATS vendor of choice (which makes sense, considering they’re both tapping the same VC sources):

By using Facebook connect, I was able to easily link my account to create a Jobvite profile, and applied to the job via “Apply with LinkedIn.”  After doing so, I was sent the following e-mail:

This is pretty standard for an ATS, but this is often the last time most job seekers actually hear anything about the position, because “your application is being reviewed” is recruiter speak for, “you’re about to get dumped into our black hole forever.”

That’s because by applying for a job, I’m an “active” candidate, and recruiters only seem to like ‘passive’ candidates, particularly ones they direct source themselves.  But it’s not really hard to turn the tables, and I’m guessing this approach is going to at least make sure if your resume, in fact, does get reviewed.  It’s way more effective than a crappy customized cover letter, in any case.

After applying, I went back to the Jobvite page, where suddenly the name of the job poster was visible (pretty cool feature, Jobvite – enforcing transparency is a good thing for candidate experience). I’m guessing this is because we share mutual connections on LinkedIn and I used their API to apply for the position: turns out the recruiter is named Jenny Vallecer (right side of the screen). 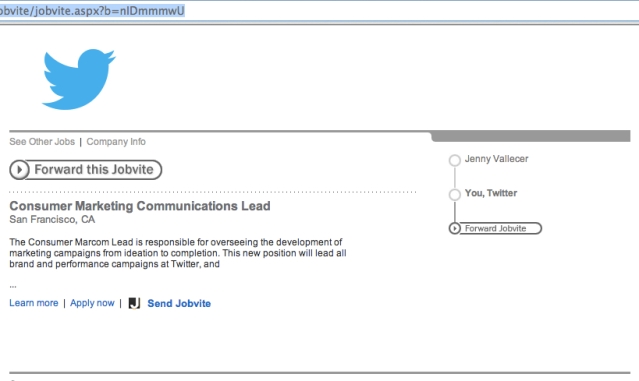 OK, so with that name, I’m able to go over to Google and see what I can find out about Ms. Vallecer.  Here’s what showed up in my personalized search (since we’re only connected through LinkedIn at this point, these are the same as the results that return when I hide the custom search option on the main search query): 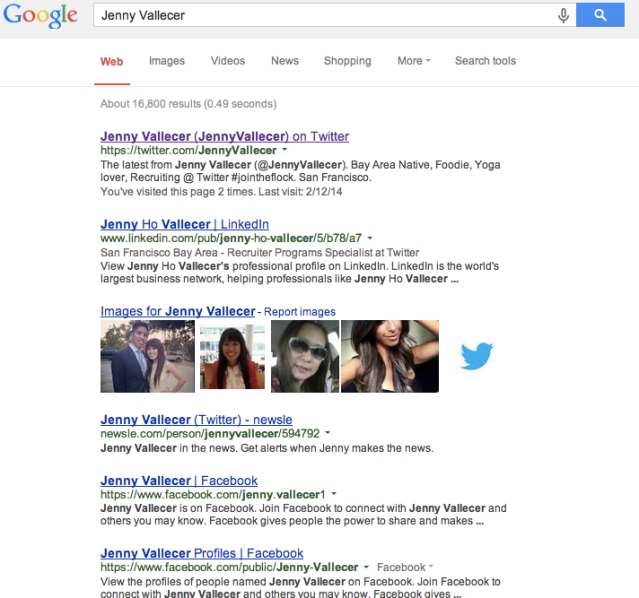 OK, so now, not only do I have LinkedIn account, I can say with fair certainty that the “Recruiting @ Twitter” result is probably the person who’s hiring for this particular role, even if she’s not the point person for @jointheflock.  I’ll go ahead and follow her: 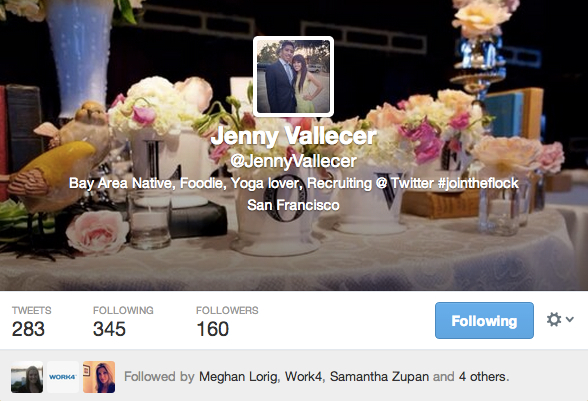 Thanks to Twitter’s default setting of showing people who you already follow, I have a couple potential referral connections already.  In this case, I could ask Meghan Long (who works at Twitter, too) or Samantha Zupan, who works at Glassdoor (who could probably tell me whether or not I’d be a culture fit, all things considered).  But assuming that I didn’t want to reach out to either, I’ll go the route of using LinkedIn.  Here’s Jenny Vallecer’s profile:

Since we’re second degree connections, I could conceivably contact her directly through LinkedIn without sending an InMail: 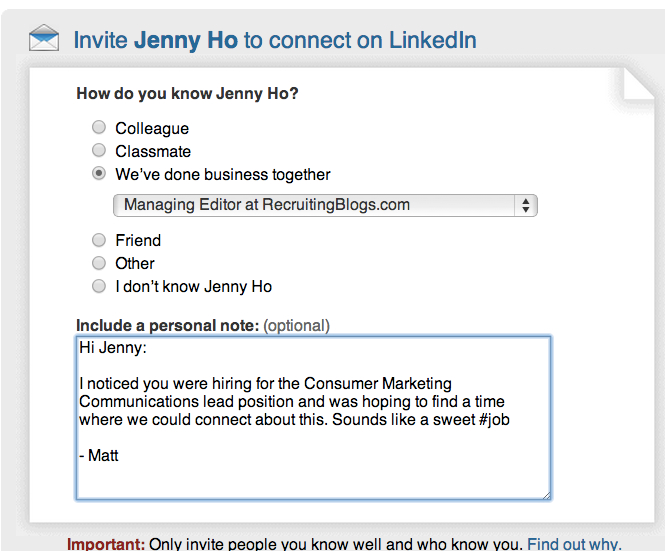 But rather than actually send this, let me see what else I can find out about Jenny.  In this case, I’m going to turn on one of my favorite tools, Connectifier, which is a Chrome plug in that aggregates profile results for free (it’s currently in beta, but it’s pretty bad ass).  While this shows up in either her Twitter profile or LinkedIn, unlike many profiles with richer information, neither has much additional identifying data: 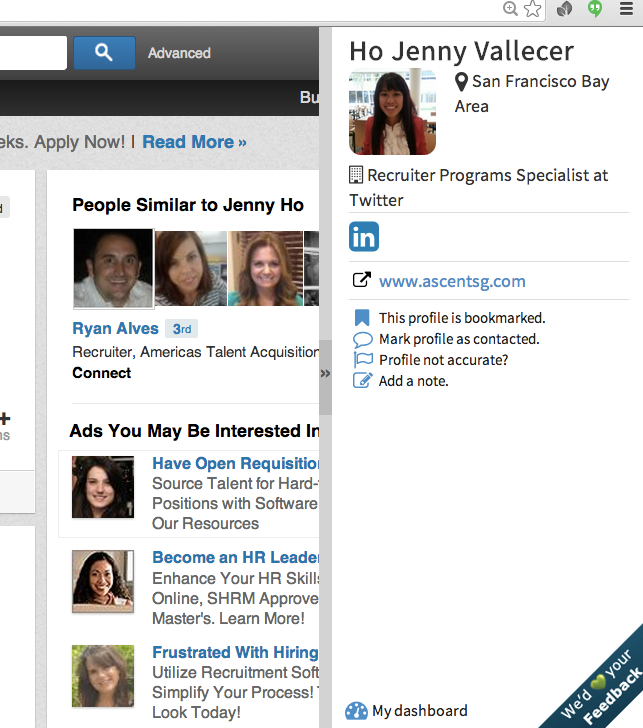 OK, time to go to Spokeo. Problem is, “Jenny” or “Jennifer” Vallecer doesn’t return any results at all, and there are hundreds of Jenny Hos in Northern California, and even those in San Mateo, where @JennyVallecer geolocated her most recent tweet, didn’t seem to match this one’s age or online profile:

OK, striking out – and no results searching by that Twitter name or her e-mail, either, which, by checking out other connections who work at Twitter on LinkedIn (wild card searching that domain name doesn’t work like most corporate URLs), I can deduce is [email protected] since their e-mail matrix appears to be first initial, last name.  But since that’s an inexact science at best, I want to dig a little deeper.  So let’s try seeing where else her profile image from LinkedIn appears by right clicking “Search Google for this Image” in Chrome.  Here’s what that showed: 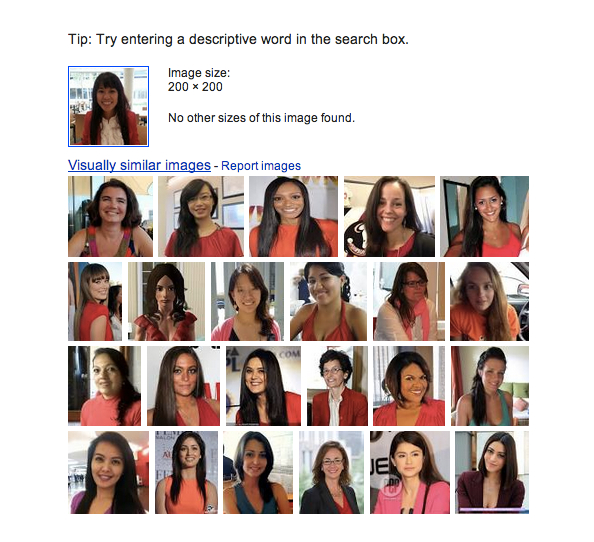 That’s not incredibly helpful, so let’s try doing that with the picture from her Twitter profile: 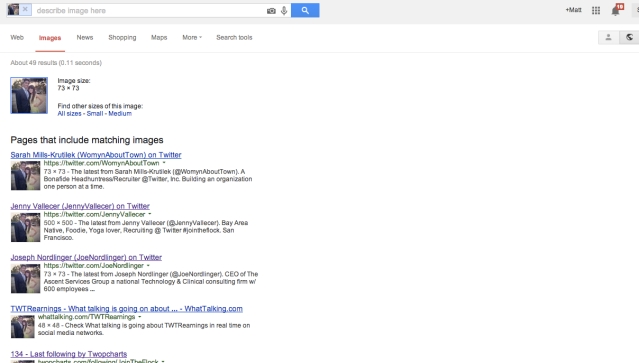 A little bit better, but nothing I really didn’t already know…so let’s try Facebook.  I just type in her name in the Open Graph search, and, voila, got a match although we do not actually share any friends on this network and both have private profile settings (thanks, Zuck): 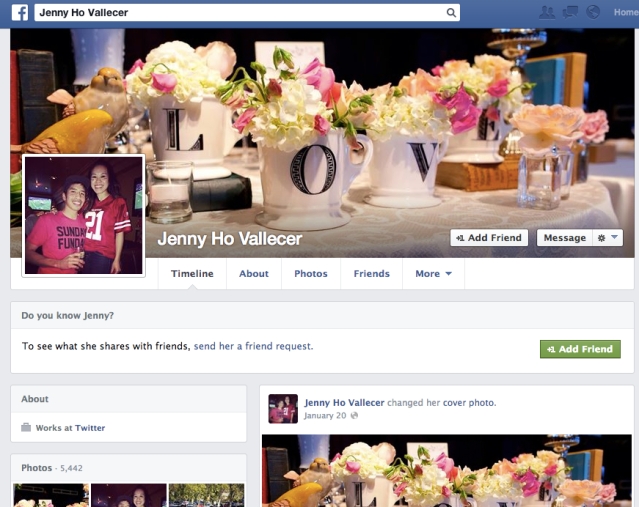 By just looking at her public posts (which are limited to profile pics and places since that’s the default security setting), I can deduce that she’s not only a UC Davis alum but posted how grateful she was to have gone there (so might want to add a “Go Aggies” to an e-mail communication) but also a 49ers fan (so maybe I’d bring up how terrible it was they lost to the Seahawks, whether or not I actually believe that).

These are the things that I promise would get a response on Twitter or LinkedIn because, well, these are the commonalities recruiters and candidates alike respond to.  Also, let’s see if searching Google for her Facebook image has any better results.  And then, boom, the new Klout suddenly shows up: 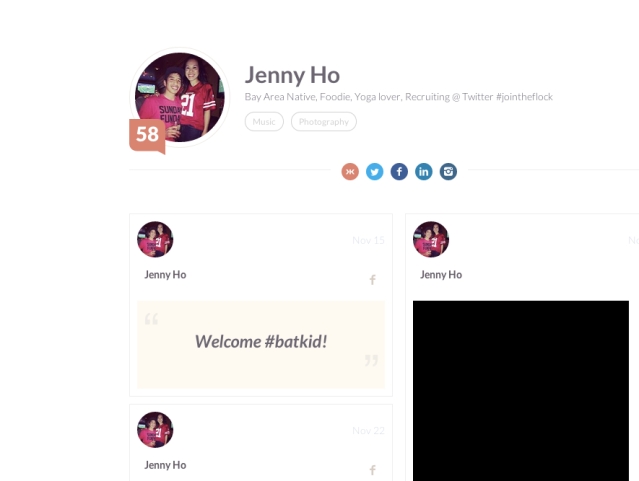 So now I have a Quora site I didn’t have before (she follows any conversation related to In N Out, so if I were to get an interview, I know what to bring her to score brownie points) as well as an Instagram account (scandalous).  But still no phone number or personal e-mail address.  Which is OK, because while she’s not a heavy user, she does have a Google+ account, which means I could send messages directly to her GMail inbox or, alternatively, hit her up for a video hangout, which is likely way more effective than a phone number, considering that as a member of Gen Y, she’s unlikely to respond to that in the first place, and even less likely considering she’s a recruiter for a brand name company overseeing interesting roles.  But it’s a start. 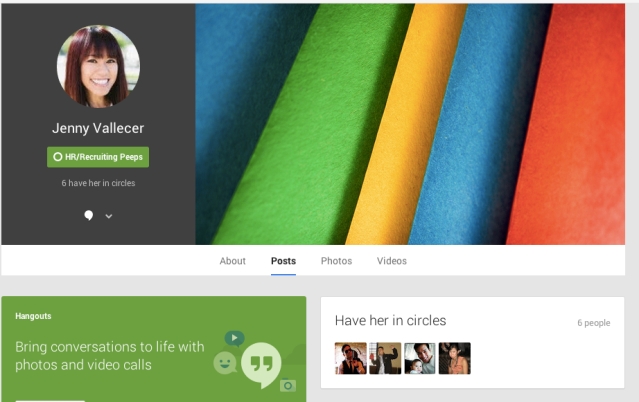 I’ll admit Jenny’s common maiden name, geographic location and limited social profiles due to both name changes and an obvious awareness and utilization of online privacy settings made her harder than most searches – and more time consuming. Pulling back open Connectifier, I’d be much more likely to ask for a referral from the person who actually runs @JointheFlock in the first place, because she doesn’t seem to have the same penchant for privacy (and sorry, Jenny, but know you started there in October according to the life event viewable on your Facebook timeline, so don’t want to call you out explicitly, but this was a live experiment.  Next time, I’m going after Jackie Xu instead: 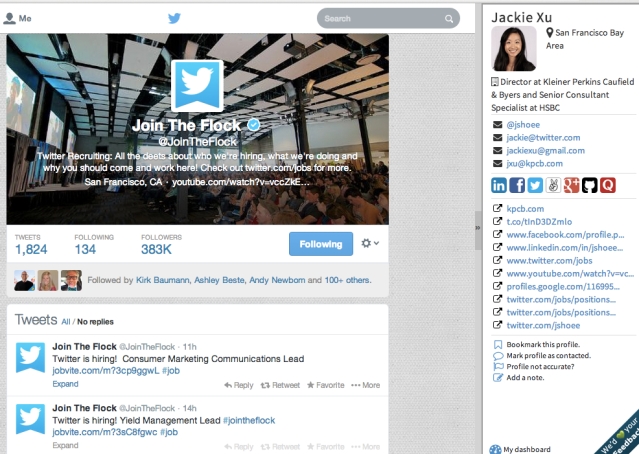 Bet she’ll see this post, though – and if I were truly a candidate for the position, I wouldn’t think this was creepy, since passion for and knowledge of social media were two listed requisites on the job description, right?

Thought I’d share how to show recruiters some love this Valentine’s Day – this post is for educational purposes only, by the way, so please, no subpoenas. Looking forward to learning more of this stuff next week at SourceCon.