Remote Employees: A Study on Productivity, Perceptions, and Perks 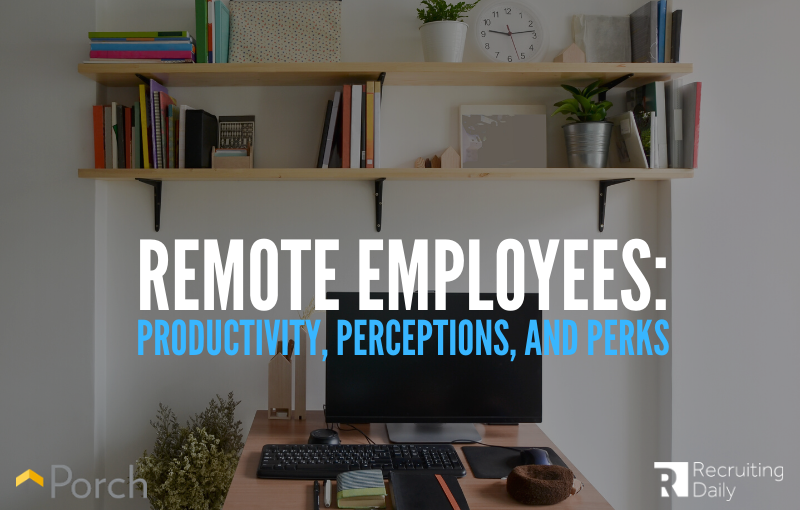 In an ever-changing digital workplace, the office itself may become the latest to go obsolete. Recent research suggests more than 40 percent of workers have worked remotely to some extent, and this telecommuting trend is only likely to intensify.

A growing number of corporations have embraced work-from-home options. Finding participating employees at least as productive as their in-office peers. Moreover, many professionals view working remotely as an important enticement when considering job prospects.

In the elusive search for a work-life balance, it helps to cut out the commute. Yet the realities of working from home remain largely unknown. What do employees actually do when liberated from the office environment? Do distractions crop up incessantly? Or are we actually more productive in the comfort of our own homes?

Let’s explore what working from home is really like. The data in the following study takes the experiences of over 1,000 workers in three categories. These are full-time remote employees, those who split work time between their home and the office, and professionals who work in the office exclusively. The data reveals the perks and problems remote workers encounter and compares their experience to that of their office counterparts.

Whether you already work remotely or simply envy those who do, you won’t want to miss this true view of working from home. 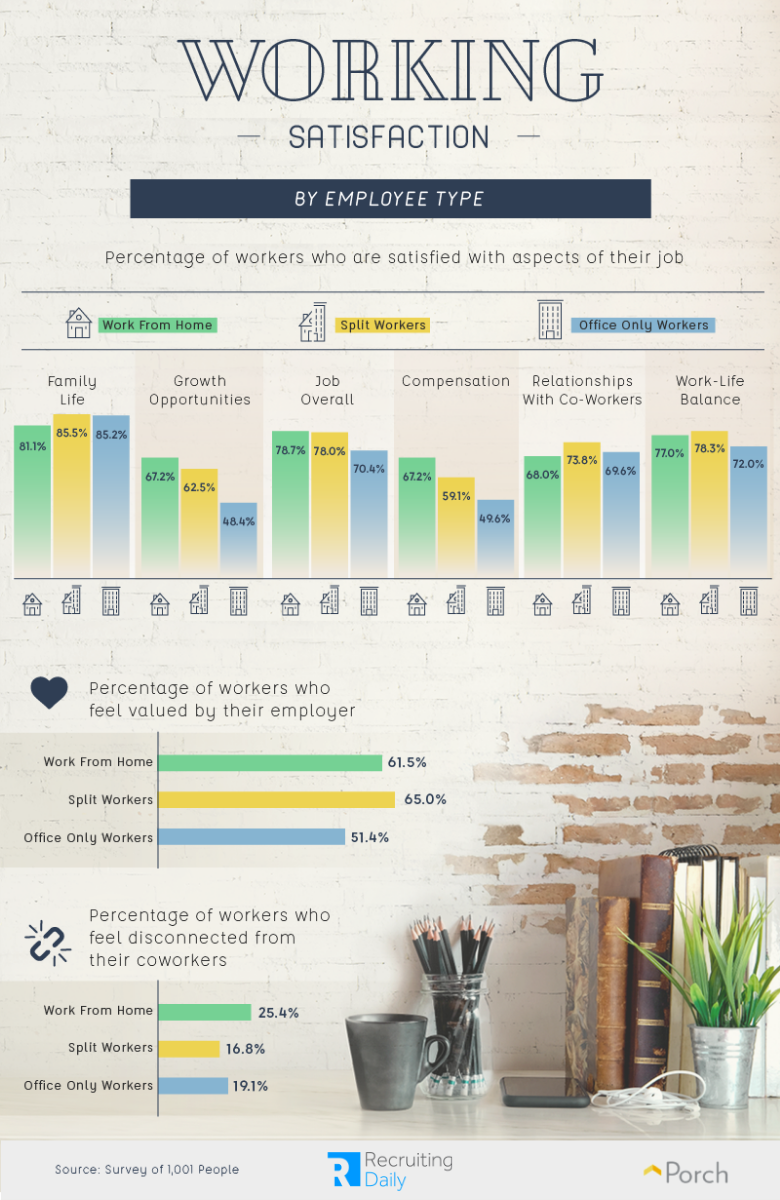 Balance beyond the office?

In many different areas, professionals who worked from home or split time between the home and office reported greater satisfaction than their in-office counterparts.

This trend was especially evident in matters relating to individual performance. Remote or split-time workers reported more satisfaction than in-office employees, with regard to pay, growth opportunities, and their jobs in general.

Results like these form the basis of the business case for offering work-from-home options. Multiple studies have found remote employees to be happier and more engaged after leaving the office setting.

Interestingly, however, a hybrid approach may be even more beneficial to workers than working exclusively at home. Work-life balance and family life satisfaction were best among the split-time cohort, for example. They were also most likely to feel employer appreciation.

Moreover, spending part of the week in the office may pay great dividends with colleagues. Split-timers felt most satisfied with their co-worker relationships. And, they were less likely than in-office workers to feel disconnected from fellow employees. 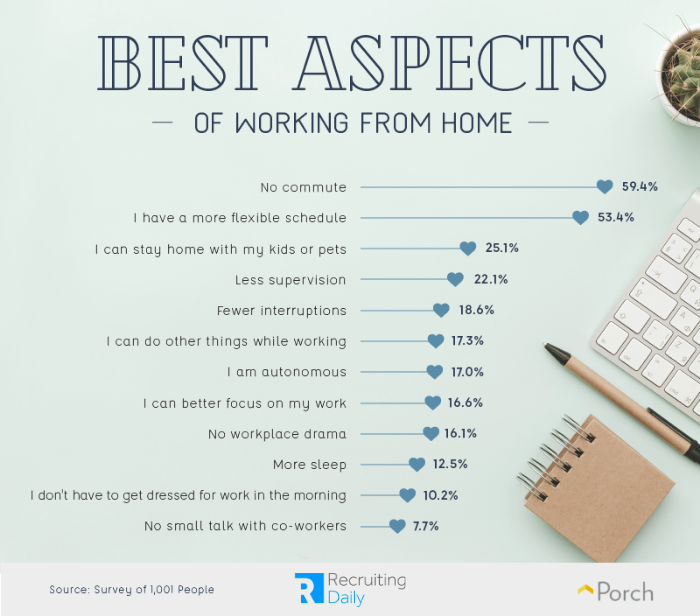 Of the potential perks of going remote, work-from-home professionals were most grateful to forego the daily commute.

Time spent in traffic can add up quickly. The average American spends over 200 hours a year getting to work and back. So the emphasis on this benefit is understandable. Schedule flexibility proved nearly as important. More than half of remote workers identified this advantage as one of their favorite parts of working from home. This perk is often especially important to parents. For whom a rigid 9-to-5 schedule can impact child care.

Similarly, more than a quarter of remote workers appreciated the ability to stay home with kids or pets. Other favorite work-from-home perks included freedom from office frustrations. Many preferred less supervision and fewer interruptions. And others appreciated greater autonomy and an improved ability to focus on their work.

Other commonly cited benefits had very little to do with productivity. More than 10 percent said they loved sleeping longer and not getting dressed for work. A significant percentage also appreciated the chance to do other things while working. So what kind of unsanctioned multitasking are work-from-home professionals most tempted to try? 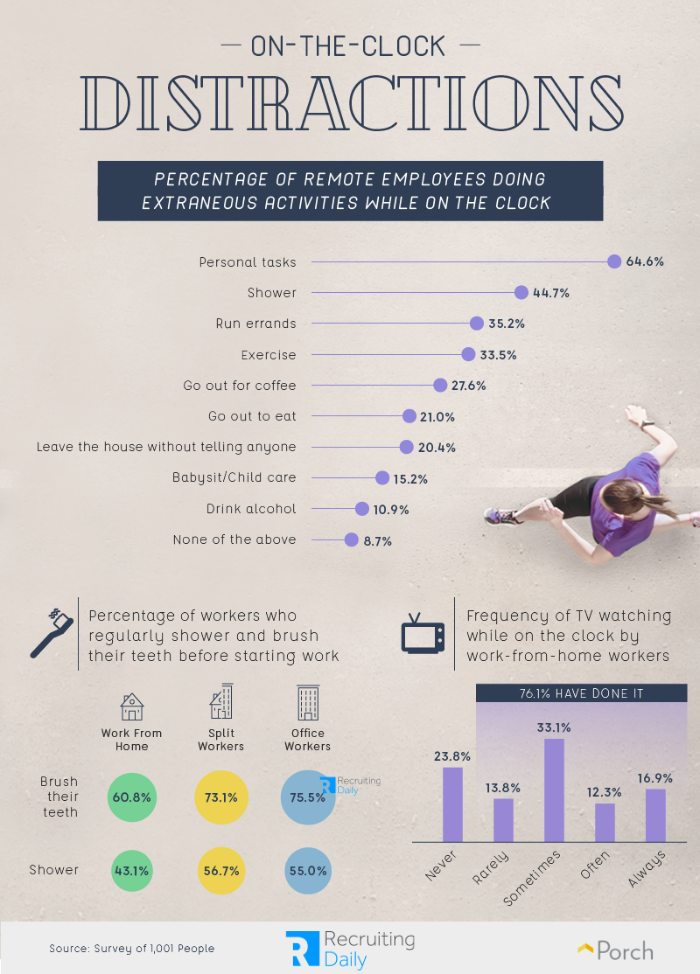 The data suggests it’s tough to resist the allure of entertainment. More than three-quarters of work-from-home employees watched TV on the clock at least once, and nearly 17 percent reported always doing so. To be fair, some workers may simply use the TV as a source of white noise. And, offices are often full of counterproductive background sounds as well.

A more concerning drain on productivity might be personal tasks. Nearly two-thirds of workers admitted checking items off their personal to-do lists while getting paid.

Perhaps work-from-home professionals felt compelled to shower midday because they skipped cleaning up in the morning. Where the majority of office and split-time workers regularly showered before starting work, just 43 percent of remote workers did so. Remote workers were significantly less likely to brush their teeth before getting to work as well. 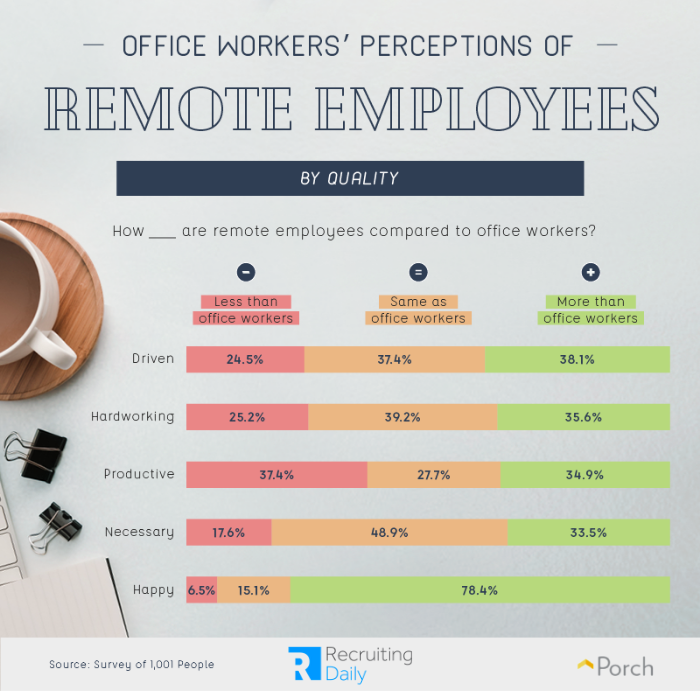 Working from home may be increasingly commonplace, but professionals who do so can still arouse strong feelings. When asked about remote workers’ happiness, in comparison to their in-office counterparts, over 78 percent say that professionals who work from home are happier.

The work ethics of remote workers were also highly regarded. Only about a quarter of respondents feel that work-from-home professionals are less driven or hardworking than their in-office peers.

The question of productivity raised more division, however. Thirty-seven percent felt remote workers were less productive, nearly 36 percent said they were more productive, and almost 28 percent deemed them equal to in-office employees on this count.

Recent studies suggest working from home may actually boost productivity in some cases, but given the data about unsanctioned activities on the clock, it’s easy to see why opinions to the contrary continue.

Interestingly, a third of respondents said remote workers were more necessary than in-office employees. This finding could reflect who gets to go remote. Perhaps highly valued professionals have more power to negotiate work-from-home arrangements. 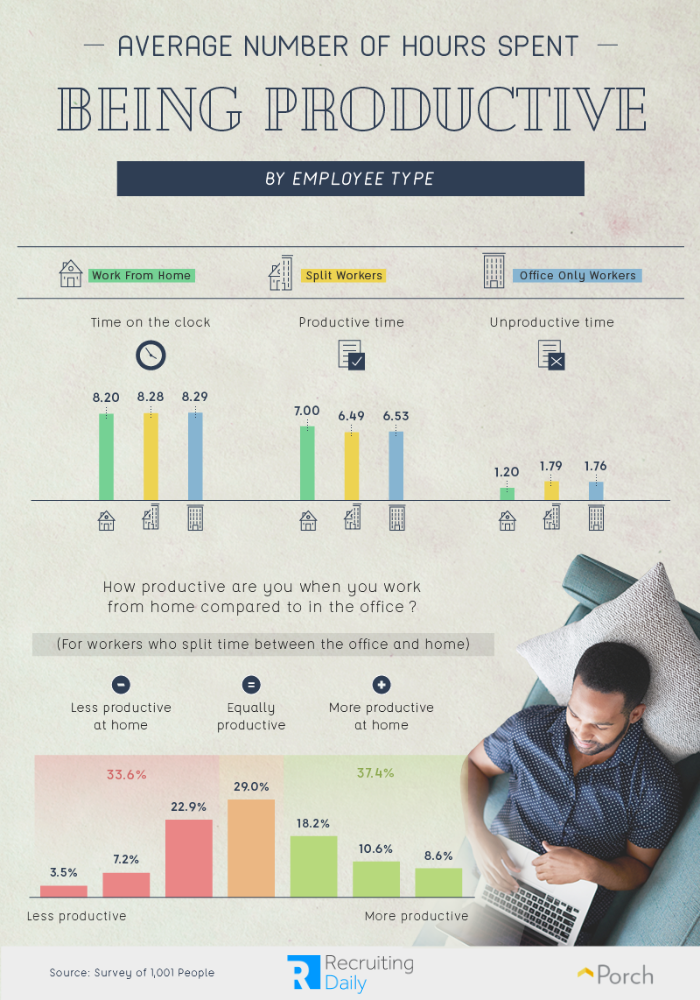 Although office, split-time, and work-from-home professionals spent similar amounts of time on the clock each day, remote workers reported being slightly more productive on average.

Experts have suggested many reasons that professionals who work from home may actually be more industrious. Including the theory that remote workers have more concern for the perception of unproductivity and overcompensate accordingly.

Employees who split their weeks between home and the office offered an interesting case study in contrasting opinions. Thirty-seven percent felt more productive when at home, whereas nearly as many said they got more done at the office.

Of course, a hybrid schedule also raises the question of where to work on each day of the week. Some suggest “work-from-home Wednesdays,” for example, explaining a mid-week change of pace works wonders for morale. 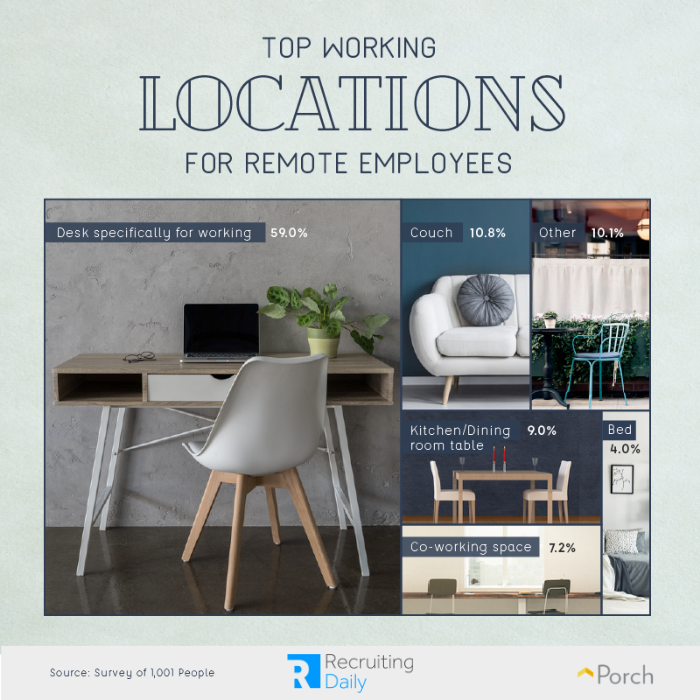 However you feel about traditional office environments, they’re built with work in mind. That’s not always the case at home. Remote employees may not have access to a proper work area and will resort to surfaces designed for other purposes. The kitchen counter was a popular desk alternative for professionals at home. Although many adopted a more casual approach, relaxing with their laptops on the couch or in bed instead.

Thankfully, 59 percent of at-home workers did not need these options, using a desk specifically devoted to their work. Or even creating a small home office.

Additionally, roughly 7 percent reported going to co-working spaces. A rapidly growing industry catering to remote workers in search of a sense of community. In fact, co-working’s rise suggests things can get a little lonely once workers go remote.

What do people miss most about the office once they leave it behind? 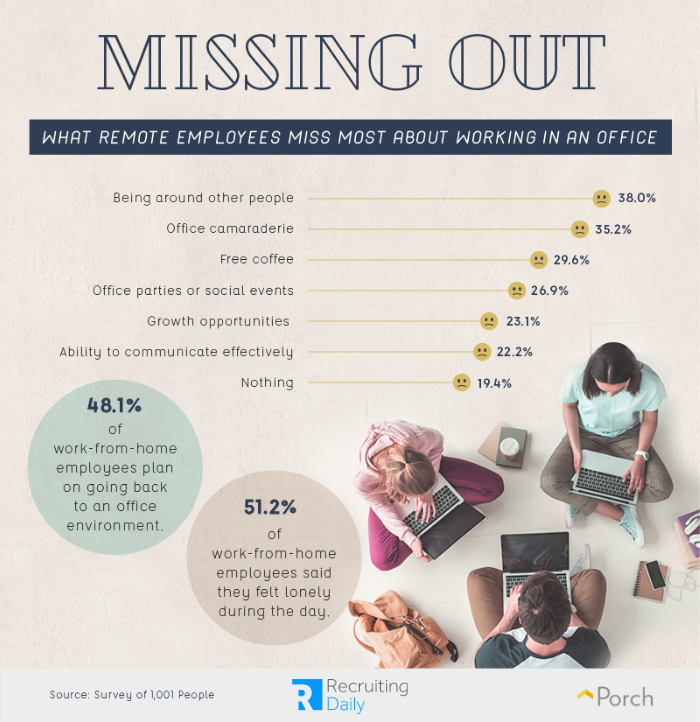 However liberating it may seem, remote work often takes an emotional toll according to respondents. Thirty-eight percent of at-home workers reporting missing being around other professionals and roughly 35 percent felt they were missing team camaraderie. Perhaps a lack of human contact explains why most remote workers reported feelings of loneliness during the workday.

Moreover, 48 percent said they planned to return to an office environment at some time in the future. As more workers confront feelings of isolation related to working at home, many companies are struggling to maintain morale and engagement within their remote workforce.

Of course, some remote workers had more practical concerns, such as coffee at no cost or the ability to communicate effectively in conversation with co-workers. Nearly a quarter felt their opportunities for growth had been curtailed by working from home as well.

Still, a sizeable contingent of remote workers felt no regrets. More than 19 percent said they missed nothing about the office at all.

These findings suggest that professionals who work from home are often as productive as their in-office peers and frequently more satisfied in many aspects of their professional lives. But the remote lifestyle’s pleasures can quickly become its pitfalls. When distractions beckon throughout the house, productivity can prove difficult.

Additionally, for all the frustrations of commuting and a rigid work schedule, the office entails real chances for human connection and colleague camaraderie.

While working from home is an opportunity valued by some, others may find it isolating. If remote work does sound appealing, however, your home will need to meet a new set of requirements. While the couch or kitchen table may suffice temporarily, you’ll probably yearn for more suitable working conditions over time.

Rocio Espinoza is an SEO and Content Marketing Specialist at Porch.com About Porch: Thankfully, establishing a great home office can be easier than you imagine. Porch’s home professionals offer a speedy and affordable renovation transformation. They can also provide you with handyman services needed for your next home project. Get started with quotes from trusted local pros today. Because you shouldn’t have to do all the work around your home.