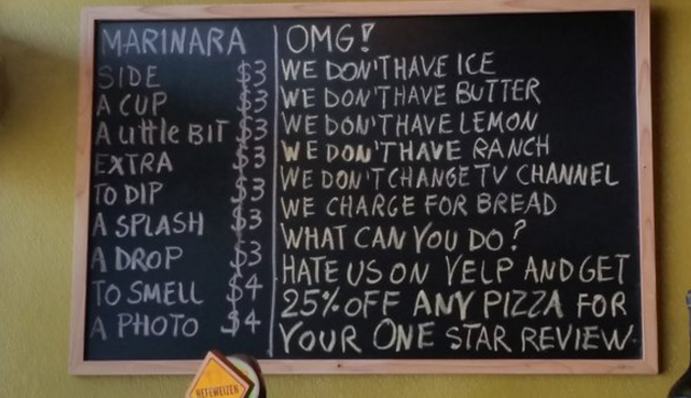 When you’re going to a town you’ve never been to before, where do you go to find advice and help on what to eat? Yelp, of course.

You want to know where the best food is. What people think. We need to ask the expert and get advice from friends because we’re overwhelmed with options. We tend to actually make decisions based on those references, especially when we’re interacting with people online.

There are armies of academics doing research on this new economy, driven by user-generated content. User-generated content has a bigger impact on consumer product knowledge and purchase decisions than anything they’ve figured out in the lab. It’s probably obvious why – online reviews and ratings reduce the uncertainty factor for prospective consumers. We know we’re eating something good. We know we’re buying the “right” thing.

Now, right or wrong, people believe this stuff. Nielsen found that online opinions were trusted by two-thirds of consumers. That’s 66% of your buying audience.

In studies from major analysts and researchers in our world, everyone is reporting that candidates are “shopping” for jobs the same way we shop for food – by the references. We trust strangers who generate content more than we trust our instincts and that has evolved into today’s user-generated jobs economy.

That has driven a dramatic increase in the attention recruiters are placing on Glassdoor feedback, of course. Some talent acquisition organizations are even including their Glassdoor interview ratings in their corporate metrics.  Others are looking to find ways to increase the number of interview reviews. It’s becoming an agenda item to the C-Suite so I wanted to take the time to figure out if reviews even matter.

To test the theory given the greater emphasis and priority being placed on the user-generated candidate experience story, I thought I would research the interview performance of the Fortune 500.

Here is what I learned:

1. The average number of interview reviews is 481, but most have less than 154 reviews

There is a wide distribution in the number of interview ratings, with about 10% of companies having more than 1000 reviews, however, many organizations do not even have 30 reviews. The mode number of Fortune 500 Glassdoor interview reviews is only 154, thus half of the F500 have less than 154 interview reviews

2. Not surprisingly, for most companies, only a small fraction of candidates  leave feedback, but have a big impact on company perception

The average number of employees in the F500 is about 69,000.  Assuming 15% of the total workforce is close to the number of annual hires, and each filled-position interviewed 2.5 candidates, then, on average, 25,000 candidates are interviewed each year for an F500 company.  With a mean of 481 cumulative reviews collected since Glassdoor started, then it is easy to see how less than 1% of interviewed candidates actually post feedback on Glassdoor. Thus, similar to Yelp, the critical few have a big impact on the many candidate readers.

3. The average positive experience across the Fortune 500 is 63%.

I have heard many recruiters hypothesize that most candidates only go to leave feedback on Glassdoor if they had a bad experience.  The data clearly does not support this perspective.

In fact, the mode is also 63%, thus almost two-thirds of all reviewers had a good interview experience.  On the flip side, there are only a handful of companies who crossed the 80% positive threshold.  This tells me that there is still long way to go for almost every company to improve their candidate interview experience.

Note: Graphic excludes 19 companies where the number of reviews was less than 30.

4. The average negative experience across the F500 is 16%

While a 16% mean negative rating may not seem like much, let’s look at the math if you are a consumer-oriented company.  If a company is interviewing 25,000 candidates, and the 16% is a statistically representative sample, then about 4000 candidates are unhappy with their experience. Not only might they tell friends and colleagues about their bad experience which impacts other potential hires, but losing even half of those customers (2000) for a lifetime could be worth millions of dollars in lost revenue.  It’s pretty easy to do the math on why investing a little more in the candidate experience has a positive ROI.

Note: Graphic excludes 19 companies where the number of reviews was less than 30.

While I realize Glassdoor wants to make it simple for candidates to submit feedback, there are a few glaring issues to make the data useful for employers. The 3-point ‘Rate the Overall Experience’ scale is oversimplified to provide differentiated statistics. Using the Net Promoter Score scale would provide more meaningful, standardized data to use for analysis. Similarly, Glassdoor’s current method of capturing open-ended feedback relates to their ‘Describe the Interview Process’ question with additional ‘Briefly describe the interviewing and hiring process’.  While this is helpful to set expectations for other candidates to know what to expect, it does not consistently guide candidates to detail what went well and didn’t go well for their interview experience.  Here are some good examples where candidates detailed answers were very helpful. Unfortunately, a majority of the time, candidates detail the process steps without adding an explanation for their rating.  Putting in an additional text field after the rating scale with the question ‘Why did you give this rating?’ would be helpful to both candidates and employers.

6. It only takes one person to create a negative candidate experience.

After reading hundreds of negative reviews, one pattern quickly became apparent. No matter how many times a candidate detailed interactions with several interviewers and multiple positive experiences, it took a single bad event (like an interviewer didn’t read their resume, the recruiter didn’t follow up in a reasonable amount of time) for all that goodwill to be forgotten. This shows how a great candidate experience is only as strong as its weakest link.

My key take-away from this analysis is that it is still early in the game for companies to shape and change their Glassdoor interview ratings and reviews.  By both improving their candidate experience and leveraging new ways to encourage candidates to leave feedback, employers can drive up their positive feedback rates to improve their employer brand and candidate perception.

Ray Tenenbaum is the founder of Great Hires, a recruiting technology startup offering a mobile-first Candidate Interviewing Experience platform for both candidates and hiring teams.  Great Hires was named as one of Entrepreneur Magazine’s Brilliant Companies of 2016 where it was ranked #2 in Business Tools.  Follow Ray on Twitter @rayten or connect with him on LinkedIn.