You’re not nearly as understaffed as you think

I’ve had a bunch of different jobs, and at every single one, someone in a middle management role or higher has constantly referred to how understaffed their department (or organization) is. Whenever someone talks about their current job, they usually include some variation of how understaffed they are, leading to how busy they are, leading to how everyone is pitching in more.

The point is, everyone seems to think their team or department is completely understaffed at all times. But what if that’s a myth?

The understaffed myth and the Temple of Busy

This first part of the understaffed myth shouldn’t be that hard to follow or conceptualize. Basically, people love to be busy. They often think “busy” means “productive”– it does not — and in a world where your direct manager feels they “don’t have the time” to respect you, being busy — i.e. heaping a lot of stuff on your plate that has no real tie to business outcomes — is crucial to how relevant you feel at a job.

See, you’re not getting standard human affirmation from your boss in a lot of cases (they have targets to hit too) and you’re not getting true purpose from your company (that’s not their job to provide it), so you have to look for what you need wherever you can find it. For most people, that’s 40 hours a week (but claiming 75!) of service at The Temple of Busy.

The understaffed myth and job role

Alright, check this graphic out. 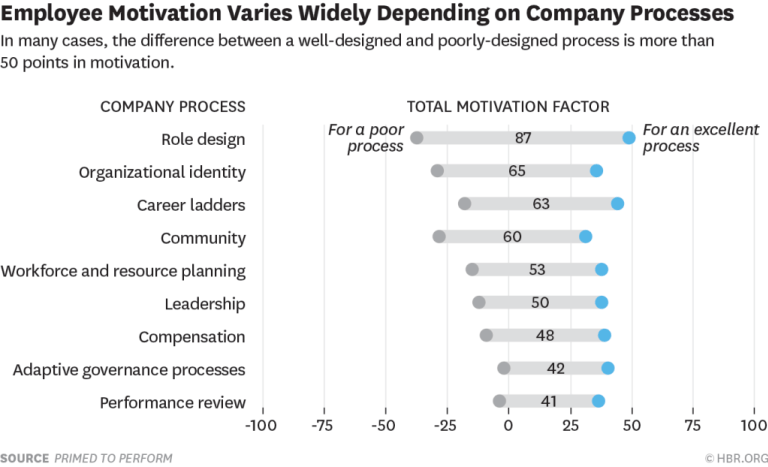 This is based on an idea of ‘Total Motivation’ (look it up) and shows the difference between having a poor process around something and an excellent process. So, a bad career ladder vs. an excellent one is 63 ‘total motivation’ points on a scale. Bad compensation vs. good: 48 points.

Now look up at the top. 87 total motivation points are tied to role design, i.e. what the hell is your job and what do you do.

Here are a few reasons why this ties drastically into the understaffed myth:

Let’s get personal for a second, and philosophical. I got canned from a job in November ’15. Twas a bad scene. Now, there’s two important things to reflect on here: first off, that job had virtually no definition. The job role was unclear from the jump (my bad on accepting, possibly) and it didn’t matter to a soul, including my direct boss most at the time. I often struggled with that, and did so badly.

Now here’s the philosophical part: since my exit, I’ve heard from dozens of people that the wrap on me at the company is that I was a “bad employee.” Sure, sure. That’s logical. Here’s the deal, though: how can you be “bad” at something that probably didn’t need to exist in the first place? For a job with no real job role or design, isn’t anything you do essentially a value-add by definition?

Here’s my overall point: people’s motivation can fluctuate twice as much relative for “job role” vs. “compensation.” That’s really powerful, especially when you consider how many revenue hounds exist in this world. So maybe when we constantly talk about being understaffed, what we’re really saying is…

We have a bunch of people, but we’re not clear what they do and we don’t know how to put them in the right spots to succeed.

And that right there is the essence of shitty management, brought to life by the understaffed myth.

The understaffed myth and hiring

This all begins with hiring, of course. Typically you move from the standard cover your ass move of ‘the hiring manager shuffle’ to a bunch of people bellowing about headcount to a totally rushed process based on everyone’s belief about how busy they are and predicated on meaningless interview questions.

Now think about a CEO giving a big speech, OK? They’re going to talk about things like “building an innovative team” and “doing more with less” (which refers to being understaffed, but also essentially says “We’re keeping most of the extra money for me and my lieutenants, fuck you very much”). They’re going to discuss “mission”and “purpose” and “building the biz” and “value-adds.”

We’ve all sat in these speeches. We know the drill.

Everything being discussed begins and ends with people. It’s that simple. People are part of the innovative team. People do more with less. People drive the mission forward. You need to care about people.

One step in this whole ‘caring about people instead of screeching about revenue plays’ model of management is this: you need to objectively (not subjectively, which is how most HR practices are oddly set up) look at people, their strengths, and the structure of various departments. Rather than yelping about headcount and rushing to hire, consider job roles. I’m not saying go around firing people willy-nilly because there’s overlap in roles or something. I’m saying understand who people are, what they can do, how they can contribute to the bottom line, and where the pieces could fit together.

At that job I mentioned above, I worked with no fewer than 14 people who no one could explain the job role of. One lady basically just walked around all day and no one was sure where she even reported. You might think this is a joke, or me lobbing turds at a former employer, but it’s not. It’s just like … this happens at so many companies.

Instead of looking at real issues around people’s strengths and organizational structure, we instantly revert to screaming about how understaffed we are.

How does this benefit anyone?

I’d propose some solutions now, but you probably don’t have time to read ’em. You’re understaffed! Doing more with less! Gonna put in a solid 80 this week!

Well, two things to end then: I did propose a solution above and (b) I know you want to be deified as a workaholic, but that 80-hour/week isn’t going to be so productive, good sir.