How Employers Can Read Virtual Body Language While Hiring 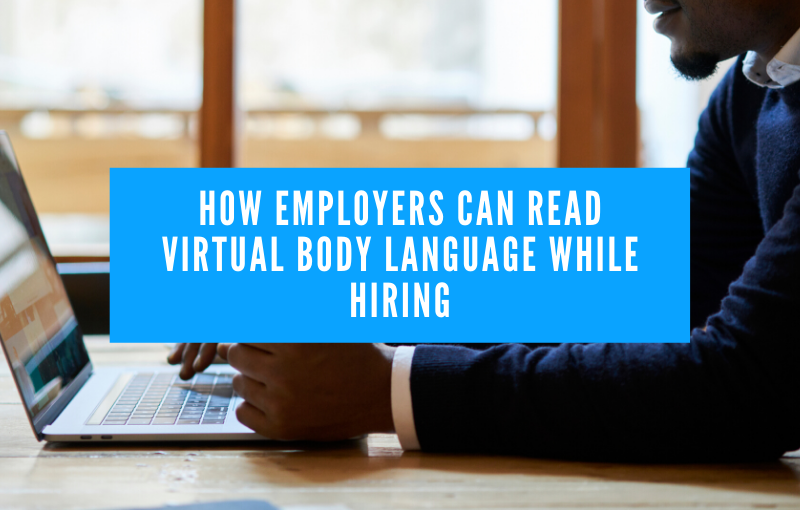 How Employers Can Read Virtual Body Language While Hiring

In an ideal world where face to face interviews are feasible, recruiters get half of the information about how candidates might turn out to be, through their display of body language. A firm handshake, confident posture, eye contact throughout- such indicators are critical in selecting the right person for the job.

An article in The New York Times highlighted how anthropologist Ray Birdwhistell observed that face-to-face conversation is only 35 percent verbal, with more than 65 percent being nonverbal.

The ability to read body language is much more than a fad. It’s science. If done correctly, the body language of a person can give away their emotional state at that exact moment.

Now, that organizations had to reorient their entire hiring process to accommodate a remote or work from home setting, recruiters face the uncertainty of missing out on the candidate’s nonverbal behavioral cues. There’s the added challenge of not being able to view a person entirely and being limited to assess the body language only through what a 15 inches screen can offer.

Here are some of the nonverbal signs and their hidden significance that you can pick up during a virtual interview:

The posture of an individual is a telltale sign of whether they are actually interested in the conversation going on. When a person is engaged with the conversation, they tend to lean in. A slouched posture or leaning back during a conversation is a sign of disinterest.

When a candidate displays such posture it usually means that either they are not taking the interview and the job seriously or else they are undermining your authority. Either way, such candidates are bad news.

The head tilt is a behavioral cue that many miss out on. A person who tilts their head when you are talking is showing interest, listening actively, or interested in what you are saying. Such candidates show that they are not only good listeners but also value what the other person is contributing to the conversation. This is certainly a trait that a good team player usually displays.

If during the virtual interview process, a candidate is constantly touching his neck or stroking his chin, it is a pacifying behavior of sorts. It could generally mean two things depending on the situation. Either they are displaying a nervous tick or they are being dishonest with you.

The hands reveal a lot about a person’s emotional state. The ability to see the hands of a candidate in a video interview will not always be possible. However, it would certainly be of your help to understand the meanings behind some common hand gestures.

The eyes are perhaps the easiest body language to keep track of mainly because it’s impossible to hide and are fairly hard to control.

When a candidate looks directly at you during the interview, it indicates that they are confident and paying attention. Consequently, frequently looking away might indicate that the person is distracted, uncomfortable, or trying to conceal their emotions.

Blinking is a natural process. But blinking too much or too little indicates their emotional state at that moment. People blink rapidly when facing uncomfortable situations or when feeling anxious. Blinking too little may indicate a person is trying to hide his nervousness or excitement.

Mouth expressions and movements can be crucial in reading another’s body language. For example, chewing the bottom lip may point toward’s the candidate experiencing worry, fear, or insecurity.

When assessing body language, pay attention to the following signals:

Pursed lips. Tightening of the lips is an indicator of feeling disapproval or distrust about the other person or the conversation.
Lip biting. Biting one’s lips is usually signs of being worried, anxious, or stressed.
Covering the mouth. When someone wants to hide an emotional reaction, such as frowns or yawns, they might cover their mouths.

Though useful, it’s important to remember that your decisions should not be based solely on your observations. An interview is an extremely stressful situation, and some candidates are bound to display some nervous behavior or the other. A candidate unable to make eye contact can be shy instead of being dishonest. Similarly, a person might smile in a tense situation due to nervousness.

To pick the right candidate, it is important that you pair the candidate’s verbal and nonverbal communication to arrive at the right result. Basing your result solely on one criterion would not be feasible or fair.

Anjan Pathak is the Co-founder and CTO at Vantage Circle - an Employee Engagement Platform. He is an HR technology enthusiast, very passionate about employee wellness, and actively participates in the growth of the corporate culture. He is an avid reader and likes to stay updated in the latest know-how in the field of human resources.