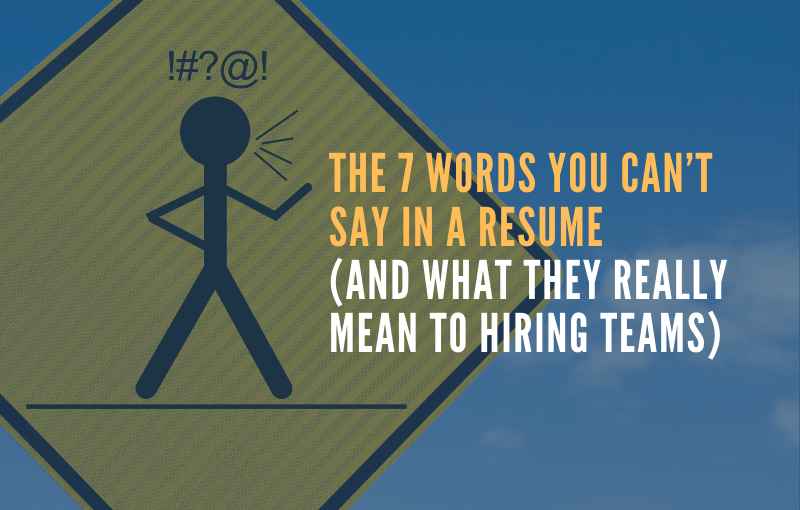 The 7 Words You Can’t Say in a Resume, and What They Really Mean to Hiring Teams

I’ve never met a resume writer who admitted to aspiring to become a resume writer the way most kids want to be firefighters or doctors. Furthermore, the knowledge of how to write resumes is not ingrained in typical public school education the way algebra and French conjugations fill up hours of students’ time.

The result of this lack is that even very bright, capable professionals grow into their roles without having a clue about what goes into a great resume. The same might be true of human resources professionals and hiring teams. Writing resumes might not be part of your role. Even if reading hundreds, if not thousands of resumes is part of your quotidian experience.

Now let’s imagine the moment when a candidate with extremely high potential sends a resume with lackluster content into the inbox (or the ATS) of the human resources or hiring team.

Let’s assume that the candidate’s career brilliance is utterly dimmed by the resume’s poor presentation and dull word choice. How does a smart hiring team reach into that document to understand the candidate’s capability while forgiving the poorly written resume?

As I’m a resume writer, I don’t think such a poorly written resume should ever reach a hiring team. There are highly accessible resources, not to mention tangible solutions, available at every level.

So, on some level, I understand that a hiring executive might not want to take the time to do the resume writer’s work. But let’s continue our scenario and imagine that the candidate is a referral. Meaning that there is some external corroboration that the candidate has the talent and the chops for the job at hand.

The hiring team thus needs to interpret the text of the resume with the foundational belief that a deep reading will uncover great things in the candidate.

You might find that the candidate uses one of the 7 words you can’t use in a resume. (Homage to the mighty George Carlin, RIP.)

These words are bland and boring. But their use should indicate to you that you need to engage with the candidate to ask very specific questions about how well they do what they do.

Candidates are likely to be responsible for something in their roles. But that responsibility was likely conferred by a job description, not an actual on-the-ground job. Ask the candidate to tell you what they project managed, jump-started, delivered, or even led.

Let them show authority and action within their areas of oversight and expertise.

Did they just manage to do something, more or less passably well? Likely they were controlling, spearheading, or overseeing the execution of something critical. They might also have been mentoring or coaching a team.

Inquire about their level of administration and engagement.

Learning how your candidate took the initiative—and succeeded at a greater level authority—could influence the way you think about their talents and leadership.

If the project expanded organically, that elevation was probably not at the behest of anyone but nature. Nor was it an intentional process. Learn from the candidate what they increased, generated, amplified, or developed. That will tell you the extent to which they challenged the norm to make a promise into a reality.

This is similar to responsible for, given that the phrase connotes detachment and passivity. Your candidate likely had deep engagement with or influence on.

Ask them how they piloted some aspect of the project or introduced a novel process. The candidate might be unintentionally downplaying their contributions in their resume, and you have an opportunity to investigate the ways they added value.

Your first thought when a candidate tells you they brought something somewhere was whether it was hand-delivered, and you might not have a clue where it came from. Ask the candidate to tell you how they originated the idea for something important, or how they demonstrated excellence.

When candidates are installed into a role with their skills already sharpened and ready to go, the ramp-up time to excellence is faster than if they need a lot of mentoring. Find out what skills, talents, and expertise they can start with on their first day in the role.

Clearly, corporate projects don’t happen through only one individual, and if a candidate tells you they single-handedly accomplished a big project you definitely need to put them on the spot about it. Assisted, however, might imply that the candidate stood by while others did the work. Ask them how they facilitated, collaborated, or assured the success of a step of the process.

See Beyond the 7 Words

George Carlin wanted television producers and viewers alike to lose their fear over words whose mere mention on the air could immediately provoke negative action. He confidently spoke the words, in order to disarm them of their power. Showing that they were just syllables to which we assigned influence.

You, too, can rethink the blandness, or even the lack of power of the language you see in candidates’ resumes. You might decide instead to choose the more difficult path to identifying top candidates through a deeper investigation of candidates you think have potential.

Remember, most candidates don’t have a lot of job search experience. Maybe they look for new roles three or four times in their lives. They (most likely) are not a resume writer, a recruiter, or a human resources expert.

Viewing their excellence through that lens might help you understand that they simply don’t know what they should be writing. However, if you take the time to ask them, they will absolutely tell you how they have succeeded in the past and how they will shine in the new position.

Imagine what could happen when you see beyond the 7 words and allow candidates to explain their excellence!

Amy L. Adler, MBA, Certified Master Resume Writer, is president of Five Strengths Career Transition Experts. Amy empowers executives with comprehensive career transition strategy and executive resume writing for executives and their teams. Amy is the proud winner of two TORI Awards for Best Executive Resume and one nomination for Best Career Change Resume and served as a judge in the global competition. She hails from Salt Lake City, UT, where she hosts The Job Search Podcast.