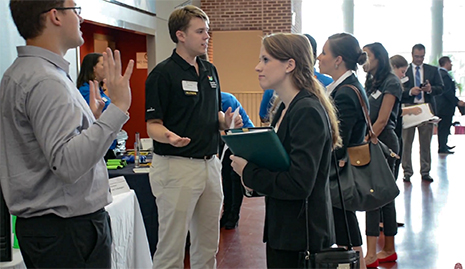 If we’re being honest: every industry has its issues. Those unique, deep-seated challenges that seem nearly impossible to uproot, no matter which way the disruptors and agitators approach the problem. This is true of diversity in every space from tech to construction or indeed inclusion from fashion to entertainment and pay disparity  from legal to transportation – you get the idea. Taken as an individual case study, the financial sector has all that and more, even in 2019, and it’s time we start talking about this space and how its recruiting and hiring practices impact recent graduates and entry-level candidates.

Financial services organizations are some of the largest employers of these populations, but according to a recent US report from Oleeo and Universum, the barrier for entry is nearly impossible to navigate. More specifically, of more than 3 million student applications submitted for the 2018 campus recruiting season covering financial and professional services, only 1 percent of those seeking employment in finance were hired. That’s downright abysmal – both for students and recruiters. But before we can address this, we need to figure out how we got here and where this is going.

There’s no doubt that the financial sector is ultra-competitive – that was established long ago and validated by the research above. Now, I write this as someone with an MBA from Columbia Business School who started their career at Lehman Brothers – however, at a time when unemployment is at a record low and digital transformation is on the minds of many an organization, it’s still surprising to see the percentage in print.

What’s more, when it comes to campus recruiting, the Oleeo-Universum study revealed the continued relevance of Ivy League educations. While students from these campuses made up 27 percent of those hired across the country, they accounted for 66 percent of hires for financial roles based in New York and Washington D.C. Outside that region, that drops to just 12 percent. Meaning that in the relative finance capital of the U.S. of the 1 percent of student applications turned new hires, the majority came from the nation’s top colleges and universities. To put that in context, there are around 131,000 undergraduate and graduate students enrolled at the 8 Ivy League schools as of 2017. According to the latest numbers from the National Center for Education Statistics, there are 19.9 million college and university students nationwide.

So if the Ivy League makes up a significant fraction of the students graduating year after year, and getting the lion’s share of finance jobs out of school, then that doesn’t leave much hope for the average college student, does it?

Knowing all this, it’s clear that campus recruiting for the financial sector caters to just a few graduates. At the same time, this industry is ripe for change – and many organizations are sounding the call. We touched on this in a recent post exploring how Bank of America updated its student strategy to improve diversity and inclusion efforts. In doing so, the organization sought to reach the best candidates, wherever they are while reducing unconscious bias in its assessment processes. This means looking beyond a select number of schools in the Northeast and placing additional emphasis on digital channels including social media.

By casting a wider net, Bank of America is now meeting these candidates virtually and providing education to students about professional opportunities through dedicated webinars and content. While just one example, it demonstrates how seemingly different recruiting initiatives can work together to improve the overall results – which in this case, will hopefully impact more than 1 percent. Part of this too is about the technology they’re using to empower the process.

Going back to the numbers for a moment, it’s important to note that there’s another factor influencing these outcomes: the sheer volume of student applications. There are millions of graduates vying for thousands of jobs, and there’s no immediate way to solve for that. That said, we can make the recruiting smarter, centralizing the apply step and using intelligent automation and machine learning to understand the needs of a specific organization better as candidates progress through screening and selection.

We’re at a point when algorithms can be trained to make decisions leveraging the evidence of abilities, competencies, skills, and experience without bias. Leveraging thousands of data points, we’re able to enhance conversions and preserve an ideal representation of hires versus applicants while maintaining compliance with EEOC selection rates. With this, we’re able to streamline our efforts without sacrificing the candidate experience for the high number likely to be dispositioned. And all that is helping to shift the financial sector from its current state to find the balance needed wanted and demanded by a higher percentage of today’s world.