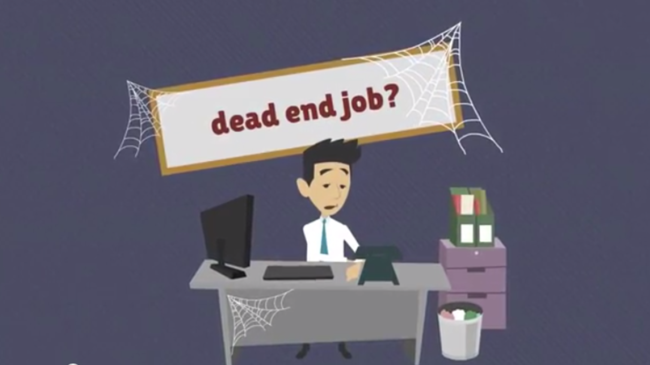 70% of the workforce have jobs that don’t require originality or creativity. The other 30% are self-employed, I’m guessing. #UNLEASH18

Ignore the second part; focus on the first.

Jobs can’t be uncreative and dead-end if I’m making a mint, right?

It’s hard to call most white-collar gigs a dead end job, but in many ways they are. Companies should prioritize internal recruitment, i.e. promotion. Unfortunately, they often get FOMO and do not. As a result, people stay in the same role for years with maybe a few bumps as cost of living increases. It’s gotten to the point where job-hopping is one of the most viable ways to make a better salary — but we have a large stigma against job-hopping, especially in HR departments. That’s a real lose-lose. It’s one of those areas of the modern economy that business still hasn’t completely caught up with.

The other issue is certain managers. If you’re doing a good job and hitting targets for one type of manager, you’re making them look good. Why would they have an incentive to shift you to a role where you can’t make them look good? These are basic human nature/psychology questions that we somehow gloss over daily. Most of work is about “I am relevant!” with a side of “I am also very competent!” If you have people under you who make you feel both ways, there’s nearly no incentive to move them to a higher perch.

All these things taken together = many white-collar gigs can be considered a dead end job.

New study from Glassdoor on why workers quit, i.e. employee turnover. Study then summarized over on Harvard Business Review, including:

One of the drivers of turnover is easy to overlook: allowing workers to stagnate in their current role. Even after controlling for pay, industry, job title, and many other factors, we find workers who stay longer in the same job without a title change are significantly more likely to leave for another company for the next step in their career. Stagnating in a role for an additional 10 months raises the odds that employees will leave the company for their next role by about one percentage point, a statistically significant effect.

The likely reason is that workers who don’t see a clear progression from their current role to a better position in their company ultimately turn to opportunities elsewhere. And that suggests an easy solution. By providing clear paths for employees, moving them through job titles on a regular progression over time, employers can help boost perceived career opportunities and limit this type of harmful stagnation.

How the job description factors into all of this

Most job descriptions are warmed-over garbage. They were recycled from six years ago, completely ignoring whoever held the job for the past six. Oh well.

Job descriptions should be a narrative, i.e. a “career conversation.” If you do this well, you move here. Your new responsibilities will include X and Y. This almost never happens. You are hired for most jobs because you were subjectively the best at checking 12 bullet points some hiring manager vaguely thought needed to be included. It’s because the company needs something now now now, which is very much the culture of most companies. But there’s no pathway from A to B at most places. And because cost-cutting measures are still somehow a business strategy, companies would rather not shell out big incentive bumps every year. (Or, if they do, they’ll mostly go to the top guys.)

If we had better job descriptions with actual pathways and role progressions, maybe we could end this dead end job stuff. And then maybe we’d reduce turnover? And save money?

Here’s one idea. And here is another.

A lot of people spend 10-12 hours/day at work, and derive a good portion of their self-worth from doing so. They want to be seen as valuable, relevant, competent human beings who can take on more responsibility. Keeping someone in the same spot for years — dead end job, essentially — is almost psychologically and emotionally inhumane, especially to guys, but it’s normative at most companies. That’s why people leave; they essentially get disregarded in favor of “Gotta get this product launch right!” and once that happens for 17 years, well, fuck it. I’m ghost.

The great irony of the whole deal is this. If someone came up to you and said, “Hey, want to do the same thing for 10 years?” you’d say “Good Lord no!” But a ton of people become bad managers and then do this exact thing to themselves and others. They create “urgent” projects, run in circles, and generally create this dead end job (but stressful!) culture. That drives turnover, which hits the bottom line. When the bottom line gets hit, the middle manager who created that dead end job loses a bonus pop. The exec? No chance.

What else would you add on this dead end job culture mentality?