Recruitment Lessons From Some Of The Biggest Tech Brands 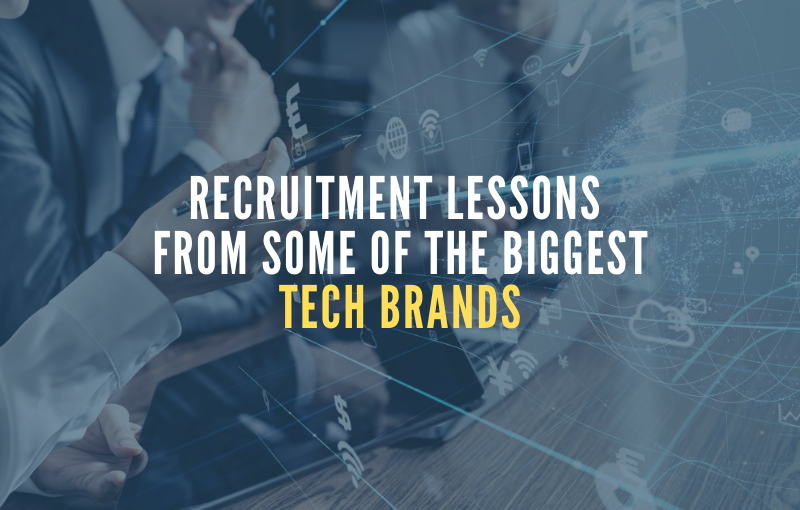 Recruitment Lessons From Some Of The Biggest Tech Brands

If the average business owner could choose just one thing they could get exactly right, what should they pick? Their brand, maybe, or their fundamental business model. Perhaps their core product or service — that’s a solid notion.

But no. If they had to make that decision, the choice should be obvious: their recruitment process. Solopreneurs can only get so far, after all.

Sooner or later, talented professionals are needed to lighten the load and introduce new options. And in the long run, every business is more profoundly shaped by its range of employees than by the person (or people) who founded it.

Do you want to run your company for the rest of your life? Or do you want to retire one day, safe in the knowledge that your cherished business has a bright future because of the remarkable team you assembled and your talent pipeline?

Great recruitment certainly isn’t easy, though. So it’s hardly surprising that big businesses invest so heavily in attracting the best workers. This is particularly true of huge tech brands, as they’re generally more forward-thinking and willing to break from norms.

In this post, we’re going to look at what some top tech brands can teach us about recruitment. Let’s get started.

How people think matters more than their answers.

Google heavily prioritizes what it calls GCA, which stands for General Cognitive Ability. In other words, what matters is how you can solve real-life problems. Having great qualifications from well-regarded academic institutions is nice. But is nowhere near as significant as it’s often made out to be by elitist employers (who ironically don’t end up hiring the most elite candidates).

After all, every piece of work that comes along will bring fresh challenges with it, pushing workers to develop new skills, refresh old ones, and adjust how they operate in general. When you’re hiring for your business, don’t worry so much about what people have done before. A commitment to forming your own opinion will let you find some overlooked diamonds.

Self-starters and risk-takers are highly valuable.

Lori Goler of Facebook wants to hear from people who’ve made big mistakes “in the pursuit of big ideas.” Or, people who won’t stick to safety when there are new tactics to try. This isn’t unique to Facebook, though. You could say something similar about the other big tech companies.

The dominant brands have long concentrated on acting quickly. (And failing just as quickly if failure is unavoidable. which is why the apocryphal “fail fast, fail often” mantra became so influential.) This is a stance that we’re now seeing reflected in up-and-coming tech companies, which makes sense (why wouldn’t they want to emulate such immense successes?).

The team behind task management software GetBusy, for instance, uses the initialism BSU. Which stands for Blow Stuff Up! (exclamation point included)

But not all professionals are capable of adopting that approach. When you find candidates with clear track records of — to borrow that metaphor — blowing things up, you should bring them in and let them loose.

Microsoft does something interesting with its hiring process: it has interviewers work in pairs. The classic sole-interviewer setup has been around for so long that it sounds quite odd. It’s certainly not the most practical tactic. Interviewers need to be trusted senior employees, meaning that taking up the time of two instead of just one is something of a commitment.

It may well be worth it, though. Having two (or more) interviewers offers much greater clarity. Even with the best of intentions, biases and gut feelings can lead interviewers to favor certain candidates over others for no compelling reasons. The freedom given to reach verdicts can allow them to place offers without having to defend their choices.

If two interviewers with different temperaments team up on an interview, each can moderate the other’s biases and challenge their assumptions and conclusions. And if they’re able to agree on the first-choice candidate, that recommendation will be significantly more meaningful.

Top talent is always worth paying extra for.

Everyone has an opinion on Elon Musk. Whether you love him, hate him, or find him utterly perplexing, it’s hard to argue with his level of success — and the innovation achieved through Tesla and SpaceX. What’s more, something that I think really needs to be highlighted is his determination to hire the absolute best.

Top pros are much more expensive than merely decent candidates and much harder to find. But if you can afford to hire them, then you undoubtedly should. Why? Because just one or two truly exceptional employees can prove utterly transformative, adding more to the company than a hundred mediocre workers ever could.

There you have it. Some key recruitment lessons from some of the world’s most successful tech brands. You might not have the budget or extensive resources of a massive corporation, but that doesn’t mean you should settle for a weak hiring process. Make it your biggest investment, and it’ll pay off hugely down the line.

Like his namesake, Just Another Magazine Digital Editor Stevie Nicks is passionate about music and writing about it. He's a free spirit, but one who takes a lot of pride in his strong work ethic, so you may find some articles on here under his name with some great career guidance and money-making tips.