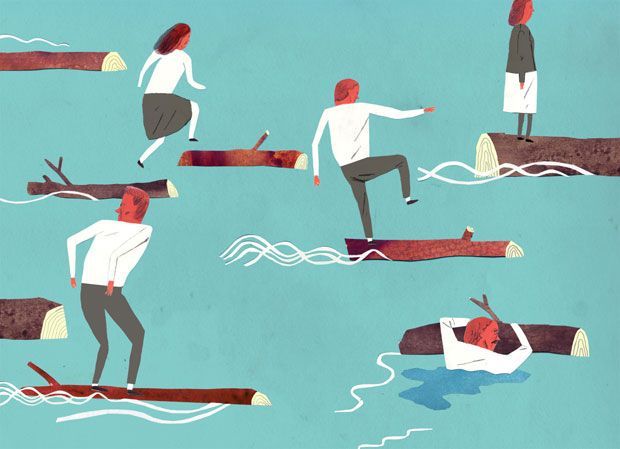 Human Resources has been chasing ‘the seat at the table’ for probably three generations now, but many organizations still treat it as a compliance function and many outright ignore it. From a senior management standpoint, the reasoning is simple: HR doesn’t generate revenue. (Although there are many ways to change that.) From a rank-and-file perspective, I’d argue that most people can’t see the first word of the term ‘Human Resources’ in action; it often seems like they’re not operating according to human principles and ideas, but rather just according to process and protocol.

One key example of this is that tons of recruiters you’ll meet or interact with still exist according to an idea that job-hopping is bad in some way, or that it shows you’re flaky, not committed, can’t focus, etc. Many recruiters also love the ‘linear resume’ (no gaps), but that’s also something that from a sheer human standpoint should be dying out — so someone wanted to go to Switzerland for a few months at 25, right? Does that mean they’re somehow a less qualified candidate than someone who sat in the cubicle for those same five months? In reality, they’re probably a better candidate because they expanded their worldview a little bit. Many recruiters miss this boat.

The job-hopping stigma has been around for a long time. Is it about to change, though?

The New Face of Job-Hopping

Before we get into this, obviously realize a couple of factors:

When you put those three things together, here’s what you come to:

And that brings us to how we can shift job-hopping to a positive thing:

There are a lot of arguments for jumping ship every few years. The economy isn’t what it used to be—and never will be again. Workers who stay with a company longer than two years are said to get paid 50% less, and job hoppers are believed to have a higher learning curve, be higher performers, and even to be more loyal, because they care about making a good impression in the short amount of time they know they’ll stay with each employer.

So let’s start with economics, because from a Maslow perspective (“hierarchy of needs,” which also might be a crock), we need some scratch in this life. (I know this all too well, as I’m currently unemployed.)

The fact is — and I’ve seen this at dozens of jobs — when you stay at a place for a while, you can become “an executor” for the top dogs (“He/she is a company person!”), which typically means you do a bunch more work, see your family and friends less, and pretty much don’t make an additional cent. (Although maybe your bonus is slightly larger, which is nice.)

See, tenure should be a good thing — it should mean a person is learning, growing, and possesses a lot of institutional knowledge about that specific place. That should be fiscally rewarded. Oftentimes to senior leadership, tenure just means “Here’s a person who can run point for me for about a decade until I’m ready to raise them one salary band.” Talent strategyand talent pipelines are very messed-up at most companies.

That’s all a long way of saying: If you want to make more money, you probably need to job-hop.

See above about the negative savings rate? Yep.

“I think that the most important, critical change in people’s mental outlook is to view employees as smart contributors from the beginning,” advises McCord, who now coaches and advises companies and entrepreneurs on culture and leadership.

“If we changed our perspective and said, ‘Everyone here wants to come in, do a great job, and contribute,’ then they either fit or they don’t,” she adds. “You build skills faster when changing companies because of the learning curve.”

So here’s the shift we’re discussing:

This shift is actually very logical, because since the 1950s I’d argue companies have evolved from ‘a safe space that protects employees’ to ‘mega-institutions that protect their bottom lines.’ I had a job once where I had an issue with some superiors and had to go through HR, right? I had an HR lady tell me “Our job is to protect senior management.” I actually think that’s potentially illegal to say, but I didn’t push it. I just slinked back to my cubicle.

So the shift, again, would be:

And look, if companies don’t really care about talent — and many claim they do but really don’t — then this model should be perfectly fine for everyone involved. We just need HR to catch up with how we hire and evaluate resumes.

There are a few more pieces to this puzzle, starting here:

People used to think that the longer you kept an employee, the more worth they are to you, because you train them and they get used to their job and then they do it. But, in fact, an employee who stays on the job and isn’t learning at a really high rate is not as engaged, so they’re not doing as good work. So it turns out, the employee who stays longest, you get the least work out of, and the employees that job hunt are the most receptive of becoming extremely useful, very fast.

This seems logical to me. If you’re moving a bunch and you’re trying to make an impact at each place, those are steep learning curves predicated on doing good work and proving yourself. If you’re at a place 10 years, you run the risk of (a) homophily and (b) becoming actively disengaged.

That said, this is all “you run the risk…” stuff. Plenty of people work at a place 20 years and love every day, and plenty of people job-hop and despise it. These are constructs; every individual is different in terms of their needs and wants out of work.

We generally know these things about work and job switching from research:

If you want to see a cool video about why purpose matters (especially at work), watch this from Stanford Business School and Jennifer Aaker.

So now we’re at a place where we’ve somewhat established that:

The final piece of the puzzle, then, is on-boarding. If someone is only going to work for you for three years, six months is 1/6 of their time there. That’s 16 percent! So you need an effective on-boarding approach to make sure the first six months aren’t a wasteland, or you just lost close to 20 percent of a person’s productivity for you. Thankfully, we know a couple of things about on-boarding better:

So there we go — I think we just figured out how to bust a few holes in the ol’ “Job-hopping is bad!” HR narrative. What say you?