Membership
Home / Articles / Is “personal branding” a buzzword, or is it crucial to the modern era?

Is “personal branding” a buzzword, or is it crucial to the modern era? 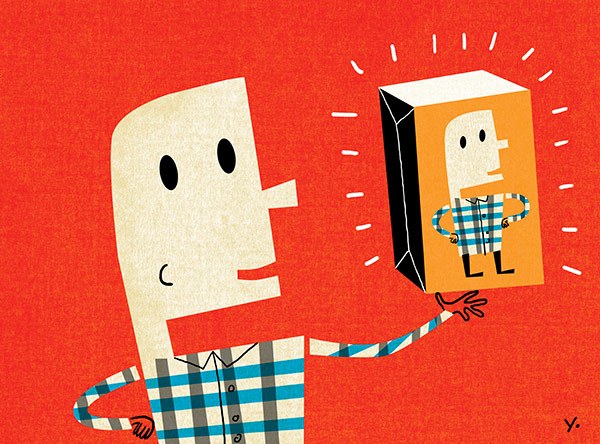 Here’s a little intro to the idea of personal branding by way of my Thursday this week. I decided to drive over to a Small Business Expo in Dallas. I’ve been doing this freelance solopreneur deal for about six months now and I’m making money and paying bills, but I figured maybe I could learn something new or innovative about running your own business at this deal. I drive 40-45 minutes and of course, the thing is Massive Up-Sell 2016, with vendor after vendor promising “hundreds of thousands of new leads” or “on-target local SEO.” I wanted to self-immolate, and left in about 1 hour and 20 minutes or so. Maybe the funniest part was that one of the keynote speakers was a “marketing expert,” and when I Googled him on my phone, his website isn’t mobile-friendly. Ha.

I walked through one keynote — by some target-hitter out of Chicago with a personal branding of ‘venture capitalist’ and ‘turnaround specialist’ — and it was one of those up-sell speeches to the max. He opened — literally opened — with “Who here wants to make $10 million in the next three years?” Hands shoot up. “It is possible, and we’re going to walk through how.” Pens scribble. Every sixth sentence, he said “This is important. Write this down.” I audibly laughed at one or two points. Thankfully I didn’t cause a commotion or anything.

This dude was Snake Oil, for sure — as were many of the speakers and vendors. Hence, I left quickly. But it underscores a bigger point about personal branding.

I had a phone call a couple of days ago with a coach who wants to build up her business a bit more, and maybe I can help. She was great. One of the best quotes on that call was “Everyone practices something every day, so you might as well be good at what you practice.” Indeed. Drug dealers practice a craft, and so do product marketing managers. Whores do, and so do CFOs. Everyone’s practicing something.

The other side of the deal is that everyone is selling something, give or take — be that a product, a service, or themselves. In the process of that thing being sold, many people do it wrong and come off like stalkers or Snake Oil salesmen.

I can’t tell you how many e-mail campaigns I’ve gotten in the past six months promising me wealth, leads, money, a great attitude, percentage growth of business, or whatever else simply by clicking on a few links within an e-mail. It’s insane. It has to number more than 100-200. Even if you obsessively curate your e-mail marketing opt-ins, you probably get a couple.

So this is my first tier on personal branding: I think it’s important to be authentic, because it can become so much up-selling so quickly if you’re not. For example, I lob a ton of grenades at traditional management structures on this blog. I get shit on all the time by people who read it and say stuff like “You’ll never get a job at Proctor and Gamble now! Oh God!” No, I probably won’t. And I’d probably hate that job if I did, as an aside.

When you use the term ‘personal branding,’ it can sound buzzword-y as hell. It sounds like you’re trying to game the system and turn yourself into a ‘brand,’ as opposed to a person with flaws, which is what we all are inherently. Also, to go back to the Snake Oil and stalking situation — there’s probably 95,481 people online selling ‘personal branding’ programs or ‘personal branding’ solutions or a ‘suite of services related to personal branding.’ Again, it can seem buzzword-y.

But it’s crucial — and here’s why.

Personal Branding and The End of Employment

I think automation is still probably farther off than we think — a robot might not have your job next month, in other words. But employment is definitely shifting. You can call this “The Gig Economy” or “The App Economy” or “The Rise of the Millennials” or whatever else, but basic notions around the future of work and employee loyaltyare shifting and continue to shift.

It starts with this: companies have absolutely no moral imperative to treat their employees well. Companies are supposed to protect their bottom line, their stakeholders, and their executives. That’s basically it.

A couple of years ago at this job I had, I was sitting outside a high-middle manager’s office and he was in a meeting with one of his direct reports. It boggles the mind that he left the door open during this meeting, but I heard everything. The direct report was upset. He had hit all his targets and driven growth for the company — and, no promotion, no raise, and only about a 1.7% salary bump, which is barely ahead of inflation. He was getting pretty livid. I even think he said once, “But I hit all my targets!” The manager couldn’t give two shits. He was throwing buzzwords around like candy talking about mission and values and vision and purpose and whatever else, and barely answering any direct questions. It was a total joke. The direct report walked out nearly in tears with fists of rage.

Conversations like that happen at jobs all the time. Organizations aren’t designed to protect ‘the little guy.’ They’re barely designed to protect big wigs, honestly — if your revenue takes a hit or there’s a PR scandal, a CEO can be out the door too.

The old notion of employment has devolved into short-term project work. It doesn’t matter whether you get paid a salary,  hourly wages or a consulting fee. Consultants and contractors have more job security than traditionally-employed people do now, because traditional employment comes with no guarantee of job security whatsoever.

Some people call this “Team of Teams” or whatever. Phrased another way: round up all the middle managers and put ’em out to pasture.

This is all a long way of getting back to personal branding. See …

If you get axed from a gig or want to hop on a different project or drive an Uber or whatever, where is someone going to go for information about you? Google. LinkedIn. Twitter. Facebook. Your references, which is an aspect of reputation/trust. It’s all a complicated series of ecosystems and referrals and information-seeking.

Personal Branding And Being Authentic

And it all points back to your personal branding.

So yes, it sounds like a buzzword. And yes, there are target-chasers the world over asking if you want to make $10M in the next three years through some combo of personal branding and aggressive e-mail list growth. And of course, people are selling snake oil and following you around the Internet like a dog (“re-marketing”). All this stuff happens and exists and it’s hard to hide/run from.

But as the way we work and conceptualize work shifts more and more, we’re all kind of lone wolves in a way. We have friends and trusted professional colleagues, sure — and spouses and kids and pets and all that. But at the end of the day as someone is trying to gather intel on you for a new team or project or opportunity, there’s dozens of ways for them to do it now. And it’s all about your personal branding.

It matters tremendously — and certainly moreso than the bold company name on your resume. That could change tomorrow.

Your take on personal branding?