What Are Indeed’s Best City For Job Seekers 2018? 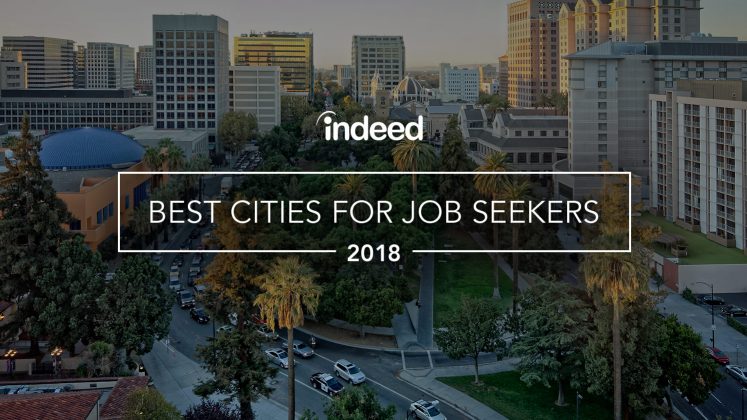 We won’t delay the suspense — it’s San Jose, California. In fact, here’s the entirety of the top 12: 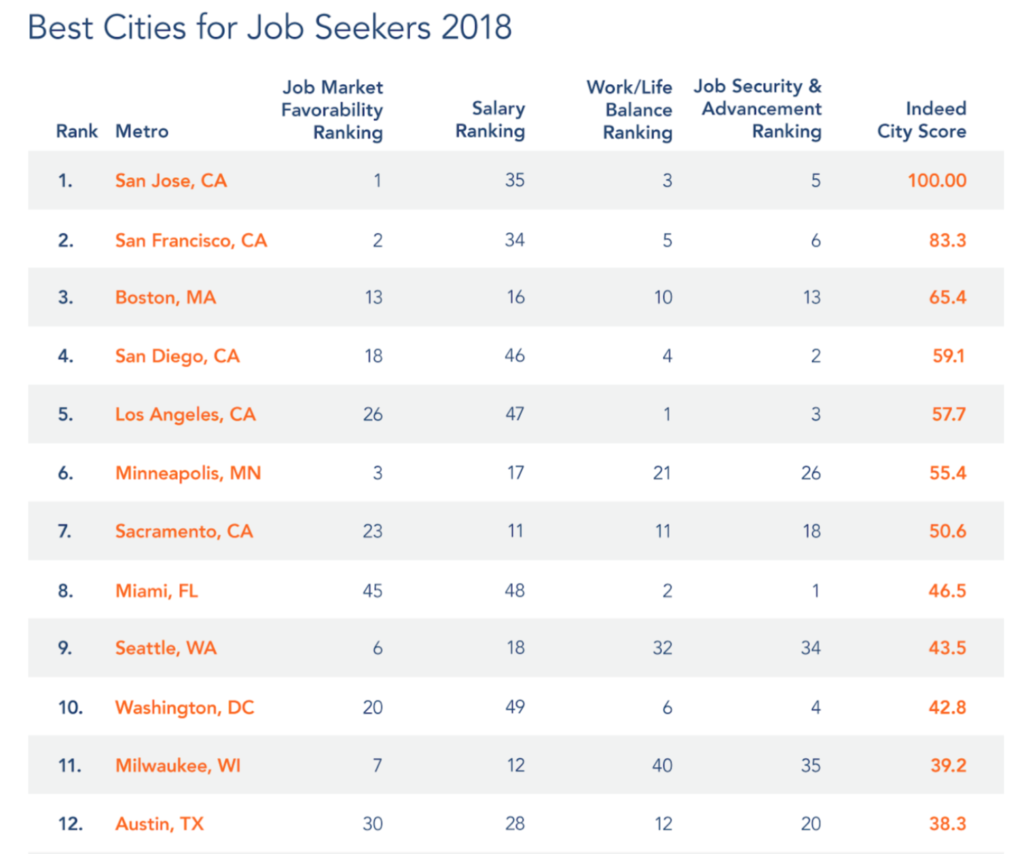 Now let’s talk a bit more broadly about some trend lines associated with this.

How were these rankings arrived at?

They then analyzed the data for the 50 metro areas with the most job postings on Indeed, and ranked each city on the four factors. Indeed’s data science team used these factors to create an Indeed City Score, which gave cities an overall score out of 100.

What are the biggest differences from 2017?

This is the second year Indeed has done this research.

Their 2017 rankings featured seven southern cities from Florida, North Carolina, Tennessee and Texas in the top ten. This year half of the top ten cities for job seekers are in California— including first place San Jose, second place San Francisco, as well as San Diego, Los Angeles and Sacramento.

That obviously speaks to the tech stack’s rise and Silicon Valley/perks associated with those roles. It will be interesting to see what happens in the 2019 Indeed rankings based on the next 10-12 months of Facebook and other social media potentially being more regulated and losing consumer trust. Will that impact the influx of people to California-based tech roles? Probably not within one year, but it might.

Also remember — more on this later — that a bunch of Californians are leaving the state as well, often for Texas and Oregon. One of the main reasons is coastal home prices.

What did you say about coastal home prices?

The elephant (or giant apple) in the room, is that the most populous city in the US is absent from this list. For the second year in a row, New York has not made the top 25 list for job seekers (it came in 46 out of 50 in our analysis).

Since 2010, the number of people moving out of New York has outpaced the people moving in, and over a million people have left — the largest migration out of a major US city during that time period. This is reflective of a larger trend of Americans leaving the northeast for other regions, and it’s possible that job seekers may be seeking less expensive places to live.

To wit: The rise of the Midwest in Indeed’s research

In 2017, not a single city in the Midwest, a region historically strong in manufacturing, made the top 25 list for jobs seekers. This year, in addition to Minneapolis (#6) another five Midwestern made the top 25: Milwaukee (11th), Columbus (19th), Omaha (20th), St. Louis (21st) and Chicago (24th). Milwaukee and Omaha rank high in job market favorability, and St. Louis ranks high in salary.

The Northeast and Mid Atlantic regions have less of presence, each adding one other city in the top 25.

These trends speak a lot to cost of living concerns. There is a concept called “firm-size wage effect,” whereby bigger companies actually keep salaries down, or relatively stable (less opportunities for bonuses and raises, etc.) You need to make a lot of money to have a certain kind of existence in New York City. (I know; I’m from there and my parents still live there.) You can have a higher quality of life in, say, Fort Worth on much less money. (That’s where I live now.) In case you can’t follow along, I’m one of the 1M+ that has left NYC since 2010. It factors into job searching, for sure. 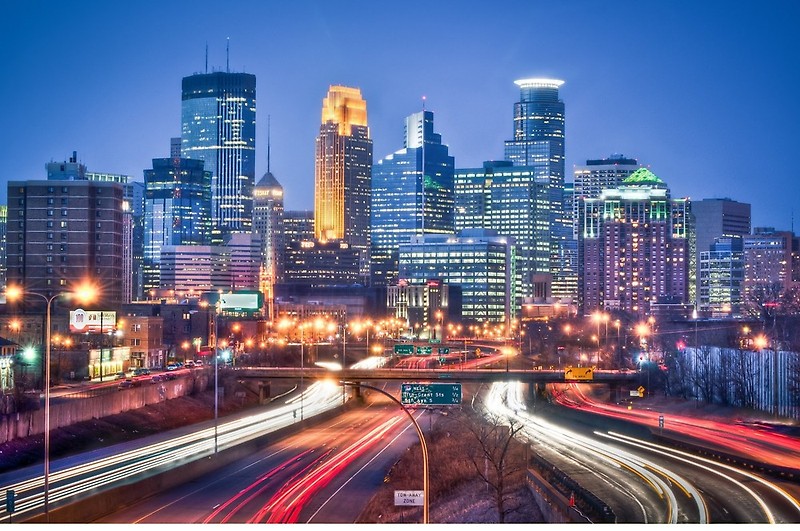 Minneapolis jumped to the sixth best city for job seekers after not making the top 25 in 2017. Minneapolis ranked third for job market favorability and had middle rankings for salary (17th), work/life balance (21st), and job security and advancement (26th).

Minneapolis is well above the national employment averages for business and financial jobs, personal care jobs, and computer and mathematical jobs, according to BLS data. Some of the biggest employers in Minneapolis are 3M, Target, Allina Health System, and the State of Minnesota (the capital is in nearby St. Paul).

Randomly, I’ve also lived there — but only for about 20 months. Other rankings of “best places for job seekers,” such as the One Detroit Index, have also ranked Minneapolis high.

Job security and advancement vs. salaries

Because Indeed adjusted salary for cost of living, this suggests that the cost of living may be outpacing salaries in these cities. They’re all coastal. See above about the potential exodus.

Here’s a blog post they put up earlier today.