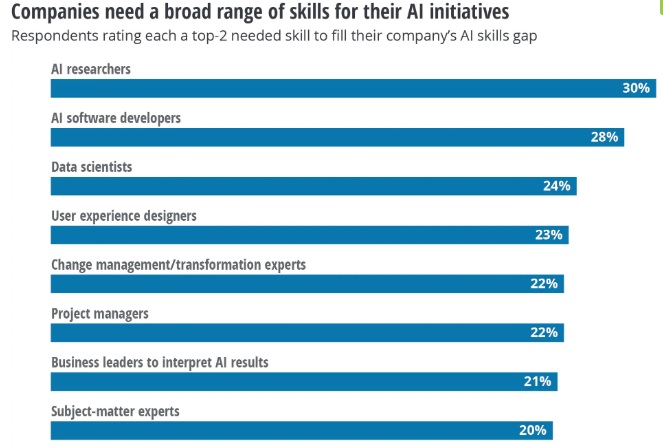 According to Deloitte’s second State of the AI in the Enterprise report, one of the greatest concerns about artificial intelligence, a technology that is dominating hiring processes for 32 percent of responding firms, is the difficulty in hiring qualified staff to manage it.

Of the 1,100 AI-early-adopter executives who participated in the just-released survey, 69 percent were facing an AI skills gap either moderate, major or extreme. Where staff was most lacking were for the roles of AI researchers to create algorithms, software developers to creates systems, and data scientists to manage and analyze the information that fuels the entire AI process.

Most agreed that job descriptions will be significantly altered by the growth of AI. In fact, 72 percent had already seen substantial changes in skills and job roles.

82 percent reporting a positive return on their AI investment

Artificial Intelligence has been a financial boon to most of the surveyed firms, with 82 percent reporting a positive return on their AI investment. Overall, the median return was 17 percent, although the tech, media, entertainment and telecommunications industries realized a 20 percent return on investment (ROI.)

While about a third of respondents expressed concerns over AI security breaches, legal and regulatory ramifications, and AI-driven bias in recruitment, 78 percent were encouraged about how AI was going to drive new ways of working.

“Companies are excited about the potential of AI to improve performance and competitiveness – and for good reason,” Dr. Jeff Loucks, executive director, Deloitte Center for Technology, Media and Telecommunications, Deloitte LLP, said in the announcement. “But to reach this potential, companies must engage risk, address talent shortfalls and execute well. While AI’s upside is significant, haste can leave companies with bridges to nowhere – pilots that don’t scale or projects with no business benefit. The good news is Deloitte helps clients understand the pitfalls and how to avoid them.”

Built with blockchain technology over the Aplic.io platform, A-Pass will retain students’ verified credentials, their work history, competencies, and achievements. Both educational institutions and employers will be able to access the platform, to review the students for school admissions or jobs. A-Pass will retain academic records and test scores.

“With Aplic.io, we are aiming to solve the problem of student and graduate unemployment across the globe and helping employers find the right candidates; with just a couple of clicks, A-Pass users anywhere in the world can apply to a bevy of institutions, embark on the student visa process, get scholarships, work experience and even arrange a full-time employment while they are studying,” Aplic.io founder and CEO Inna Bogdanova said in the announcement. “With A-Pass, by the time of graduation, a student will have a proven and validated track of academic achievements and proof of skills.”

A-Pass features include job as well as internship search.