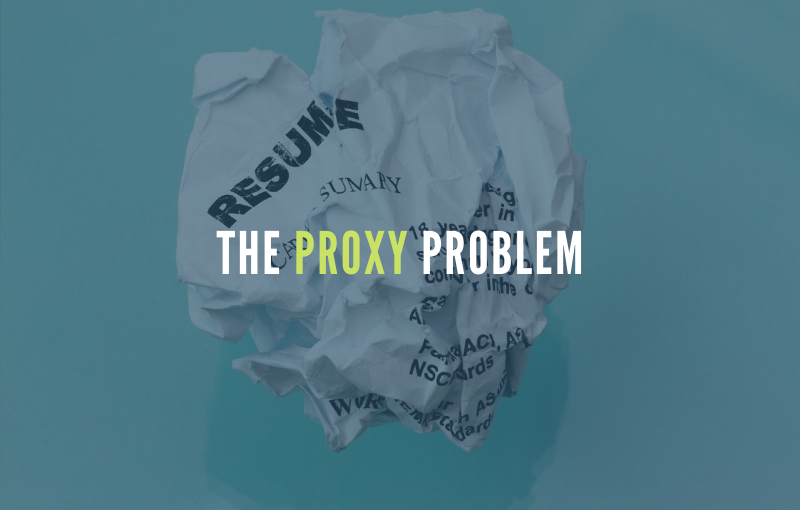 For example, we use education as a proxy for intelligence. In continental Europe, we look at a university degree, as in most countries there is no difference in quality.

In the UK and the USA, they even look at what university someone has attended. This is however a proxy with two problems. The first problem is that for many jobs the university does not measure the right traits and second, it’s a terrible proxy even for what it intends to measure.

Air traffic controllers are people that need to be able to handle sudden stress. At what time during your education is this tested? It’s not. So when the Dutch air traffic control started testing applicants with game-based assessments on their stress resilience, they did away with the educational requirements. Quality of hire went up as fewer people dropped out of the training, saving millions. This is an example of education not being a good proxy for being good at every job.

One Dutch municipality had an overload of applicants for their traineeship and decided to use an IQ test to measure the quality, as they found based on earlier current employees that had finished the traineeship this was the differentiator between the good and not so good trainees. Turned out that 60% of all applicants with a university degree did not reach academic IQ levels according to an academically validated IQ test. So apparently you don’t even need to have academic smarts to get an academic degree.

So an academic degree doesn’t guarantee a good hire and isn’t a great proxy. It does however exclude a lot of talented people. Another example.

Accounting firm Grant Thornton in the UK stoped with educational requirements for trainees in 2013 and replaced them by aptitude testing. This resulted in hiring a lot more people from a very diverse background that had all the qualities to become a good account, just not the right education or even the right grades. School grades also depend on the hours you can spend studying, something that’s a lot easier when you don’t have to work two jobs to pay for college and when you have a safe home environment.

Grant Thornton measured the results of these ‘diversity hires’ and it turns out they stay at the company longer and have more billable hours per year. In 2018 Grant Thornton won the Queen’s Award for improving social mobility.

This article by the BBC talked about the new hiring problem post-COVID-19. Too many applicants and many overqualified. This one retail shop had ‘people with Ph.D.’s apply, way overqualified’. But since when does a Ph.D. make you a great retail salesperson. The qualities you need for a Ph.D. have nothing in common with the qualities you need to be a great retail salesperson.

A Ph.D. might have these qualities, but there is no guarantee what so ever. This person isn’t overqualified for the job, she has qualifications that match different, usually better-paying jobs, better.

Some companies in continental Europe that are very internationally oriented want every employee to speak at least a decent level of English. That’s why they use English job descriptions and demand an English CV.

This excluded a lot of people that just don’t search on Google or Indeed for the English version of a job title and of course no IT professional with 7 jobs to choose from will spend two hours translating his or her CV. Interestingly enough when I quested these recruiters if they actually tested the English of the candidate? If the job interview was in English? Or if the candidate had to do an English test the answer was no.

So they still had plenty of hires with poor English skills who had a friend translate their resume and write their cover letter.

Other proxies we use are former employers, job roles, courses, hobbies and we can go on and on. I remember one recruiter telling me she wanted to know the sports someone played as you could see if it was a team player or not. Soccer? Team sport, team player. Tennis and golf? Not a team player.

We need to stop using proxies and start actually measuring skills and traits. There are excellent tools that can assess someone’s written and spoken English for example, fully automated and bias-free. AI doesn’t have a preference for certain accents like humans do.

We need to actually test a candidate on his or her competencies and traits with digital pre-screening assessments that are relevant for the job. So not general intelligence tests, as those are not legal in the USA either, but job-specific tests that measure the skills or traits you need.

And you know what the amazing bonus is? Everywhere I’ve seen these tools implemented in the right way diversity has gone up. Turns out there’s a lot more diverse talent out there if we stop using proxies to assess talent.