Membership
Home / Articles / The Five: Reasons Recruiting Should Report to the CEO

The Five: Reasons Recruiting Should Report to the CEO 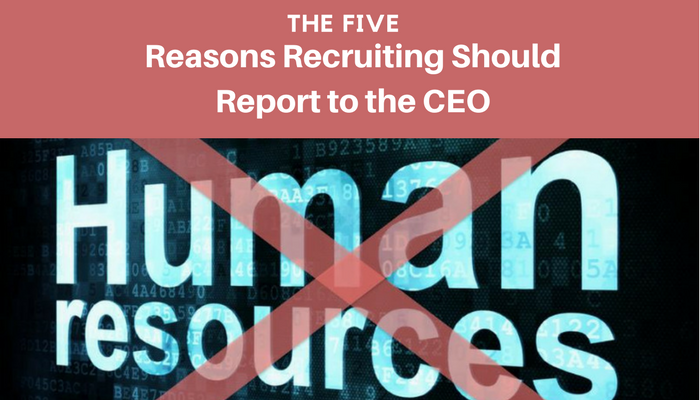 All of the recruiting management staff was pulled into a room, and that was the opening to our staff meeting.

“How are we going to do that?” I asked. “We are going to hire five field recruiters that will work with us and allow them to make hiring decisions for managers in the field. We have to find the candidates, and they will close.”

Again, I have a question: “How are we going to find five recruiters that we can trust in making this decision?”

“Well, we have to — and they need to start this week.”

For the rest of the meeting, honestly, I tuned out. I just couldn’t understand why we were finding out about this so late in the game. I mean, acquisitions are strategic and never happen overnight.

This sounded stupid — maybe one of the stupidest ideas I have ever heard in my illustrious recruiting career.

“Jackye. Jackye! You look like you have something to say.”

Fancy that. Me, with something to say. “Yeah, I do. However, again it is a question. If we have to hire all of these people, why are we having a meeting about it instead of looking for candidates?”

That was the day I realized this was not the place for me. It was also the day it became glaringly obvious that the field of recruiting was not respected in the way it should be by the C-Suite.

The biggest problem, in my mind, was that we were not invited to the executive table soon enough to make an impact. Had we been part of the conversation earlier, we would have let them know how long it would take to make the 300 hires they needed. We could have shown them the metrics. On top of that, we would have let them know the technology and staff needed to meet the staff augmentation deadlines.

Additionally, we also could let them know the cost involved and what they may have overlooked. As a team, we may have been able to succeed in our goals. Overall, we did … kinda. I mean, we put asses in the seats. I still don’t know how successful the staff we hired was. I left before we knew that.

The bottom line is this: To have a ridiculously successful and productive recruiting team, recruiting should report to the CEO. Here are five (5) good reasons why.

1 – Development of Company Culture and Values

A sizeable number of CEOs are firmly convinced that, in an increasingly digitalized world, it is harder for businesses to gain – and retain – people’s trust. They also think it is become more important both to run their companies in a way that addresses wider stakeholder expectations and to establish a strong corporate purpose that’s reflected in their organization’s values, culture, and behavior.”

That is great and all, but most employees have no idea what an “organization’s values, culture and behavior” are. If recruiter’s reported to the CEO, they would have a firm grasp on what the company needs from their candidates. Furthermore, recruiters would then be able to identify whether or not the candidate’s values are aligned with the company you are recruiting for.

Jimmy Maymann, CEO of the Huff Post said in a 2013 video:

I would like to hire people that, in five years’ time, I could see playing a big role in this organization. I always try to hire people that are playing the long game, not just the short game. Yes, they need to do a job right now, but what is it they can do for this company if we really unlock their full potential?”

Unfortunately, most of the requisitions we work on are task-based. Maybe, we lost someone in accounting that needs to be replaced, or IT is moving to a SASS platform and needs someone who can help with the crossover.

Rarely do we see that recruiting is looking for long-term hires, mainly because we (again) do not have access to that information from the C-Suite.

Recently, I sent out a tweet saying, “A company’s greatest asset is not their people. It is their people’s data.” However, most companies still like to say that they value employees more than anything else.

Employees are a company’s greatest asset – they are your competitive advantage. You want to attract and retain the best; provide them with encouragement, stimulus, and make them feel that they are an integral part of the company’s mission.”

Sure, every company wants a competitive advantage. That means keeping an inventory of what people you need on the team to create that advantage.

For example, those of us in recruiting know that things like diversity, employee engagement, referral programs, and training all create a competitive advantage. Unfortunately, most in the C-Suite have no idea how important these things are.

Also, none of these programs will work without executive buy-in. If recruiters do not have a seat at the table, no buy-in will exist.

As a friendly reminder, executive buy-in is not when the CEO says, “Yeah, that’s a good idea!” Buy-in occurs when you have the senior line leaders’ understanding, agreement, and support of the solution. They are actively involved in selecting methodologies to get things done and understand the business value. They back up what you are doing and present it to management as an expectation.

As in my example above, it is glaringly evident that when a corporation goes through a merger or acquisition, there is panic. You can feel the tension floating through the cubes. Robyn Melhuish, in her article The Dream Team: Building After A Merger, stated the impact brilliantly. For recruiters, M&A means:

It’s imperative that recruiters know about these decisions and can prepare for the impact that they will have when it comes to hiring.

Watch Anne Taylor speak on this subject. As a guest on RecruitingLive, she shared what she is experiencing now that Alaska Airlines has acquired Virgin America Airlines, where she has worked for over four years.

Most people find out about what is going on in the larger world of talent by reading about the unemployment rate. However, that number does not reflect exactly what is happening specifically with the company you are hiring for.

Recruiters know well before the news comes out when there is a candidate shortage, what roles are the hardest to fill, what people think about working for the company, and other things like that. Consequently, don’t you think the CEO wants to know what are the successes and challenges you’re having when it comes to talent?

Of course, they do! It impacts the bottom line.

In all fairness, CEO’s don’t know what they don’t know. Only the recruiting team can offer this insight. Without knowing who you have on the team, as well as the teammates you lack, CEO’s cannot plan effectively and strategically.

Ideally, recruiting would report to the CEO and be viewed as the key to a company’s planning success and growth. If this series was called “The Six,” I would add that most HR professionals have never recruited in the first place. If it was called “The Seven,” I would say it is because they have a lot of other very important things to do, but I will save those for another article …