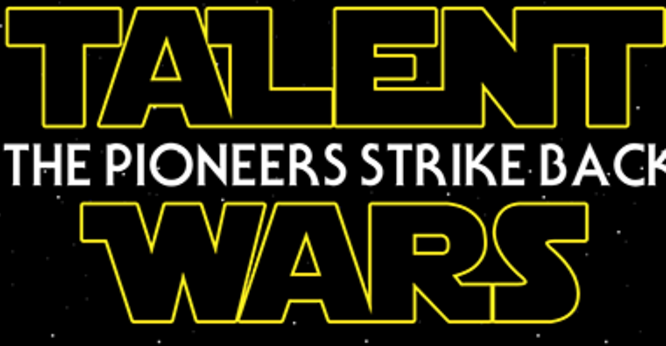 Let’s talk Star Wars, specifically Star Wars IV – A New Hope. For those of you who have seen the movies which, based on previous reactions to Star Wars themed posts is most of you, you can probably skip this contextual part. For those of you who don’t get the metaphor, I’ll get right to the good stuff. In this film, the plot is all about ending the Death Star’s plan by identifying its most vulnerable point to destroy the Death Star.  As is typical of the Star Wars films, there’s a battle and the good guys – the Rebels – suffer heavy losses, leaving Luke one of the few surviving pilots. The bad guys, led by Vader, leads a squad of fighters and prepares to attack Luke’s X-wing fighter, but Han returns and fires on the Imperials, sending Vader spiraling away. Helped by guidance from Obi-Wan’s spirit, Luke uses the Force and successfully destroys the Death Star seconds before it can fire on the Rebel base.

Kidding. I have a recruiting point. Now, if we were to apply this metaphor to recruiting, you – the hiring team – get to play Luke. You’re the hero of this story as you seek out the best jobs for candidates. But lately, I’ve been getting the sense that we have a fatal flaw in our search strategy, much like the Death Star. One that would destroy our search strategy.

Because despite the broad availability of new channels to connect, for the last decade or so we’ve been relying on one tool… LinkedIn. It’s the professional’s network, after all. I’ve seen recruiters trying every tactic available on LinkedIn – from groups to shared connections to, of course, InMail in hopes that we’d achieve the trifecta of outreach – right time, right message, right place.

I don’t have anything against LinkedIn, even if this metaphor makes them out to be the Death Star.  However, when 97% of us are fishing from the same hole we create a lot of noise and we scare off the fish. That’s regardless of your customized message, by the way. The candidates don’t stay because they like one e-mail. While customization is obviously a good thing, reinforced by the SPAM groups on Facebook and constant propaganda marketing a silver bullet for response rates, from a competitive standpoint the net benefit is negated.

Are you still with me? Is your mouth covering your hand as your brain figuratively and literally explodes?

While there are obvious benefits for message customization, where we get into trouble is not necessarily the vocabulary but the fact that we’ve become reliant on one channel.  It’s dangerous almost like… building a Death Star with one fatal weakness.  We are just waiting for someone to come along and bullseye our proverbial womp rat / purple squirrel while cruising in a T-16.  So how do we dodge this Death Star-eske Catastrophe?

After years of being solely dependent on Inmail, there is a new hope rising.  Search aggregators like Entelo, HiringSolved, SwoopTalent and until recently Connectifer (rest in pieces) have offered recruiters an edge in their sourcing efforts. While not entirely new, there is one area where these aggregators have made tremendous progress: finding contact information in an automated way, at scale. It has been a game changer for the industry.

In case you’re not in the know, you might be asking what an aggregator is in the first place. Think about Boolean searches and Custom Google Search Engines. They do the job, however, it’s a difficult task to replicate at scale. Aggregators utilize search engines but they also get smarter by saving information they gain from their search results.

Over time, they accumulate information that they can later match with the old record to append that record. Combine with new algorithms that help predict email formats and ta da, they are able to display a compelling amount of data.

So what else can aggregators do? The newest feature is the ability to integrate with our ATS. This could truly be a game changer. For years, every recruiting thought leader and coach has told us that our ATS was a gold mine of candidates. But there are a few problems with the application and sourcing of candidates from the ATS in the first place.

The first limitation is the number of results we can obtain because most ATS’ limit the number of results and the search functionality just plain old sucks. The other problem is that the information becomes outdated and good addresses go bad. People move, change jobs and even change fields so how are you supposed to know if that candidate from two years ago is still at the same job or even interested in the role? Based on marketing data that shows attrition of 2% every month on their database, the chances are good that your data is also bad by the time you come back to a candidate a year or two later.

Use The Force: Aggregation Advantage

Now there are a few big bonuses to contacting people from the ATS, even if most of the data is stale. If you find someone who is still looking, you’re already promoting a more consistent candidate experience.  Everyone says, “hey we will keep your info on file and if something else comes up we will let you know.”  The truth is… almost no one does it.  You can surprise and delight candidates by using this warm(er) approach.

The second advantage is that, hypothetically, they already know who you are. Most of us don’t work for companies with a huge consumer brand name but rather mid-market companies that few, if any, of our candidates have ever heard of. Application is acknowledgement and the fact that they know who you are will help increase your response rates. Add a line about how they applied before and you’ll see that response rate increase.

So where does aggregation come in? First, the aggregators can search your ATS more efficiently than that dinosaur search algorithm that came with the ATS.  We’ve all been on the other side of bad results, sorting through an ATS that you know has 10,000 java developers yet when you search, you see 1,000 thanks to the results caps. With an aggregator returning all of the results, you can have access to all of the resumes in the database.

Now that is pretty cool and probably good enough to send a few of you off searching for a new tool, but in the famous words of Billy Mays – there’s more!  New aggregators can also update the information in the ATS so it’s not slowly deteriorating in quality. Now that gives you the potential to turn a gold mine into a platinum factory.

This is the new hope of aggregation.  Not only can aggregators offer us multiple avenues to connect with prospects, they also help us solve data integrity woes. I know this  may come as a shock to you LinkedIn addicted recruiters, but not every LinkedIn profile and resume we find is up to date.  We need to leave the comfort of the social network confines and search our database, the internet and cross check our work all in real time.

You see I don’t think it matters if you fly a proverbial X-wing, a Y-wing , Mon Calamari Cruiser, employee referral program or an elaborate Boolean search string, the objective is the same. The challenge for our industry is that we need to move in two different directions. The choice is ours.  Evolve or be replaced.

You’re all clear kid blow this thing and let’s get out of here… what are you waiting for?

Mike Wolford has over 9 years of recruiting experience in staffing agency, contract and in house corporate environments. He has worked with such companies as Allstate, Capital One, and National Public Radio.

Mike also published a book titled “Becoming the Silver Bullet: Recruiting Strategies for connecting with Top Talent” and “How to Find and Land your Dream Job: Insider tips from a Recruiter” he also founded Recruit Tampa and Mike currently serves as the Sourcing Manager at Hudson RPO. An active member of the Recruiting community, Mike has spoken publicly in an effort to help elevate the level of professional skill.

Mike Wolford has over 15 years of recruiting experience in staffing agency, RPO, and in-house corporate environments. He has worked with such companies as Allstate, Capital One, and National Public Radio. Mike has also published 2 books titled “Becoming the Silver Bullet: Recruiting Strategies for connecting with Top Talent,” and “How to Find and Land your Dream Job: Insider tips from a Recruiter.” He is currently a Sourcing Manager at Twitter. An active member of the recruiting community, Mike has spoken publicly in an effort to help elevate the level of professional skills. Follow Mike on Twitter, or connect on LinkedIn.