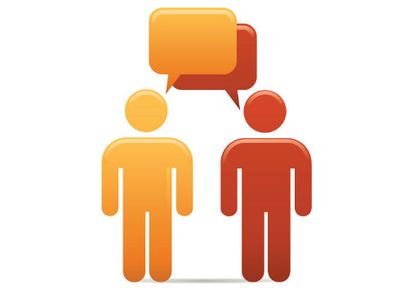 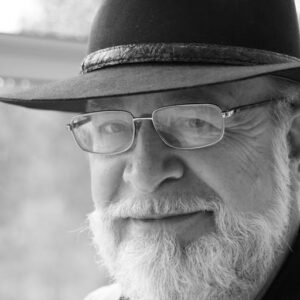 Apparently, asking your customers a direct question: “How likely are you to recommend our company/product/service to your friends and colleagues?” is a pretty solid indicator of your brand’s relationship with its customers and, in fact, has real value in differentiating one company’s performance from another.

Fred Reichheld introduced the customer-focused Net Promoter Score (NPS) in his 2003 Harvard Business Review Article, “The One Number You Need to Grow”.
NPS can range from -100 (everyone would not refer others) to 100 (everyone absolutely would refer others). Anything above 0 is considered ‘good’ and above 50 is ‘excellent’.
In the intervening 11 years since its introduction, research has generally supported the hypothesis that firms who raise their game with their customers find NPS a valuable tool in measuring their success in doing it and, that companies with a higher NPS, perform better.
Could the NPS approach, adapted to Candidate Experience, offer a comparable way to look at an employer’s Brand relationship with its candidates?  Several bloggers have speculated on this recently and several [un-named] companies are attempting their version of NPS with candidates.

There is little question in my mind that an easily obtained and reliable ‘indicator’ that represents the relative value of recruiting – one that is generated by candidates who have touched your hiring process…and, more importantly, that predicts company and/or recruiting performance would be enormously helpful.

To even think about getting there however, a few questions need to be asked.
Here are three sets of questions:
The good news is that the employers participating in TalentBoard’s Candidate Experience Awards in 2013 are generating considerable data and beginning to analyze their results in order to answer these questions. Like Reichhold’s NPS, we think it will take several years to connect all the dots but the work is clearly underway.

In its third year, TalentBoard, a non-profit 501c, collected detailed recruiting practices from ~122 firms. 95 of these employers also invited their candidates to share their observations and reactions in a comprehensive survey that took up to 40 minutes to complete (depending on how far the candidates went in the process). 80% of the candidates who responded were not hired. More than 46,000 candidates responded. 64 firms were ‘net positive’- in other words these firms, to a greater and lesser degree, delivered a positive candidate experience.
(Note: Employers did not pay to participate and the results are free. Employers whose data suggested a negative candidate experience remain anonymous but participate in the results and have a clear opportunity to pinpoint the practices they need to change.)
Among the 60+ questions asked of candidates who applied for a job at any one of the 95 employers completing the CandEs were these three direct questions:
For each question there were four optional [anchored] answers that ranged from (and I’m paraphrasing here) “Not on your life” to “Absolutely” with a couple “Maybes” in between.*
*We calculated a Net Candidate Experience Score (CES) for the ‘pool’ and for each company by dismissing the % of those who responded to the middle 4 answers (#2 & #3) and, simply subtracted % who responded to the most extreme negative response (1) from the % responding to most extremepositive response (4) for each question. (Note: This is similar in approach but operationally quite different from the calculation of Reichheld’s NPS which is based on an unanchored 10-point Likert scale where the % responding to #1-#6 is subtracted from the % responding to #10.) The resulting ranges for both approaches however are -100 (Very Bad) to +100 (Very Good).
Candidates also responded to a comprehensive set of questions about each stage in the recruiting process from their ability to research the employer to onboarding depending on how far they went.
At each stage Candidates were asked about their awareness of specific recruiting practices related to their experience (i.e. “how many interviews took place?” or, “how long did it take you to complete the application?”) and offered a rating of their experience of that segment (as well as an overall rating) that ranged from “very” or “slightly” negative to “very” or “slightly” positive on a 5 point Likert scale.
(For ~20,000 candidates, the overall experience was positive and for ~10,000 it was negative. Logically, the firms who chose to participate in the CandEs were also more likely to believe that they delivered a more positive candidate experience so it wasn’t surprising that the results included proportionately more positive candidates than we might expect from a general population.)
Of the three core questions related to NPS, we found uneven results comparing the question “How likely are you to change your status as a CUSTOMER?” to the other questions or to the candidates’ ratings of their experience. The main variable was whether the participating employer had an established retail/product brand. In general however, the answers to this question may eventually be critical to calculating the actual cost of a bad candidate experience for retail firms that have large numbers of their customers applying for jobs.
38.8% of the Candidates who rated their experience as positive said they would “increase their purchase of the [Company’s] products or services while 30.8% of those candidates who rated their experience as negative said they would “take their buying power elsewhere”. 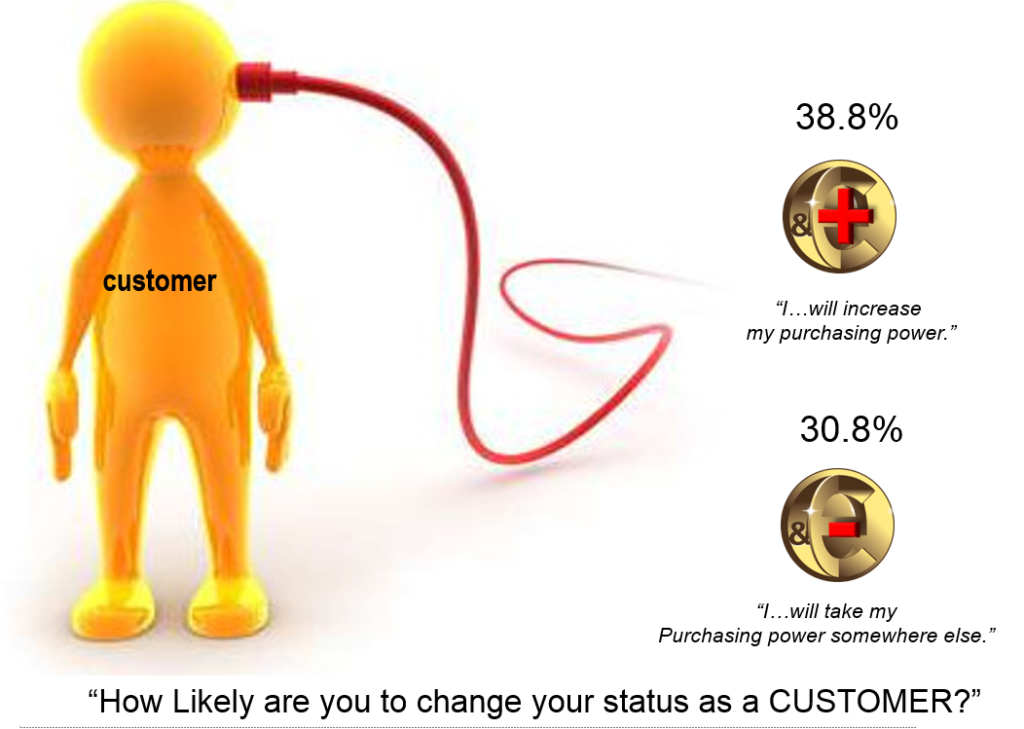 For firms whose products and services were not easily identified, the answers given by the candidates about their purchasing intentions had less connection to the ratings of the candidates’ experience.
Candidates’ intentions to apply again or refer others was clearly affected by their experience.
For Candidates who rated their experience positive:
62.0% were “extremely likely” to re-apply (only .6% said “definitely not”)
61.5% would “actively” refer others (only .5% would not refer and “actively discourage” others from applying)
For Candidates whose experience was rated negative (4, 5)
24.7% were “Definitely Not” likely to re-Apply (only 5.6% said “extremely likely to re-apply”)
27.0% would “Actively discourage others” (while 5.8% would “actively encourage” others)
Looking at each employer’s results for both the “Would you Apply Again” and Would You Refer Others” questions we calculated the NetCES using the method described earlier.
The results shown below suggests that either question could serve as the Net Candidate Experience Score. 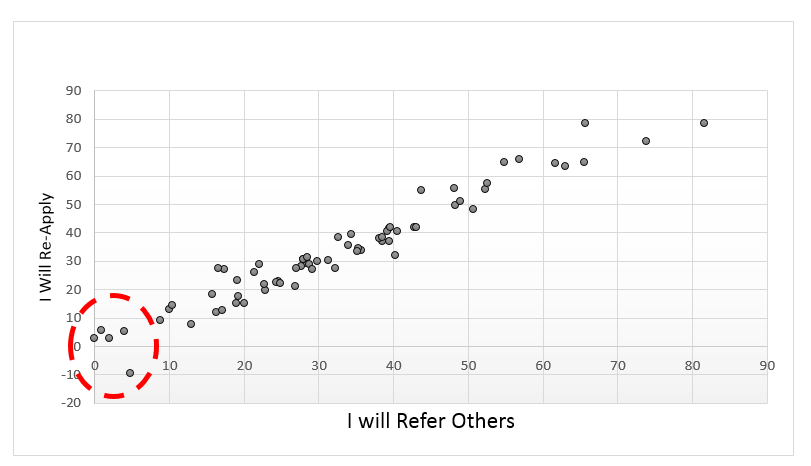 (Note: the 5 firms circled did not win the CandEs but participated in the effort to benchmark their experience.
Every other firm represented by the data point above was acknowledge as having a net positive rating for candidate experience.)

We want to prove our hypotheses that Net CES can meet academic standards for reliably measuring deeper attitudes and predicting behavior.
We also want to validate which specific recruiting practices (if present and if candidates are aware of them) are merely annoying but do not by themselves change attitudes and behavior. And then there are those that do, immediately, change attitudes.
Several of the 2014 volunteers involved with the TalentBoard, our CandE Council as it were, have I/O connections or access to PhDs willing to help. One dissertation committee for a PhD candidate in a major firm has already requested access to the data we’ve collected. We expect more. Meanwhile we are interviewing several firms willing to share openly their Net CES andPart II will offer their current insights and efforts to learn from the data they acquired this year. A Case-Study Summit on the Candidate Experience is being planned on September 19 in Chicago. More on that in the future.
At the very least, any employer who routinely and automatically asks candidates (within a short time of closing out a requisition) whether they would apply again or refer others would have their own internal indicator of the strength of their candidate experience (firms like Mystery Applicant that have emerged and offer services such as this.)
Like the canary in the mine, this approach, reported by geography, class of worker, etc. can provide an initial warning about insufficient or deteriorating recruiting practices- although it isn’t a test of what, where, when and why.
The true test that we are on the right track is being able to replicate the significance of the candidate’s experience year over year. We hope to encourage even more firms (200 is our goal) to REGISTER this year. As of this writing we are at 120+. If you’ve read this far, join us and participate or encourage your friends, colleagues and clients to do so. (A parallel effort by the UK is also open for registration)
–        We want to encourage each employer participating in last year’s CandEs to analyze the results they’ve received. The data isn’t as important as what you do with it. TalentBoard is not a consulting firm. We do supply some analysis of the data in our CandE whitepaper but not to the depth that each firm has the potential to mine. Employers need to partner with internal data analysts, hire quants as interns or consultants to assist.
We have asked multiple winners of the CandEs to volunteer as a ‘Voice of the Employer” Members of this group meet monthly as our CandE-Bar and they will be featured in a 1-day Candidate Experience Case Study conference in Chicago on September 19. Employers participating in the 2014 CandEs will not be charged to attend. Out of this effort, we hope to see how Net CES might relates to time to fill, cost per hire and quality and other performance and efficiency measures such as conversion rate, retention and employee or company performance.
We want to expand globally. We know that different cultures, even different regions, may deliver very diverse candidate experiences. The North American CandE Council has added Canadian volunteers who have launched a French Canadian version of the employer survey this spring. An active CandE council has been operational in the UK for two years and recently (February, 2014) conducted its second annual CandE awards event.
Plans are to expand the council in the UK to one that is focused on Europe as a whole by the end of 2014. Discussions in April with more than  a dozen professionals in Australia and New Zealand offer a positive view to Councils in that region of the world by 2015.
Read more at the Career XRoads Blog
Full Disclosure: Gerry Crispin is a co-founder of TalentBoard. He receives no compensation from this involvement. This is true for the other founders, Elaine Orler and Ed Newman and, for all the volunteers – practitioners, consultants or, vendors.
About the Author: Gerry Crispin, SPHR is a life-long student of staffing and co-founder of CareerXroads, a firm devoted to peer-to-peer learning by sharing recruiting practices.
General Recruiting
Candidate Experience Employment Guest Post Marketing Recruiting Industry Trends