Membership
Home / Articles / How to use Tumblr for Recruiting

How to use Tumblr for Recruiting

I can’t remember the last time I used Tumblr – besides maybe a one off campaign where some CEO insisted that we use the platform (which hasn’t happened very often). Just like any other social channel where a company fails to support content with engagement, the two-prong strategy of post and pray didn’t quite work.

If you’re a recruiter, that should sound familiar.

Tumblr seems to be a little like social’s red headed stepchild, especially when it comes to business use – it’s not like you read a ton of success stories or case studies about brands and consumers flocking to Tumblr – in fact, it rarely merits so much as a passing mention.

Which is why I was so surprised to read this little news nugget in a recent Inc. article:

Yeah, I know – the words “growth” and “Yahoo!” in the same sentence seems like some sort of mistake, but the fact is that for all the sexy, shiny new social networks that brands are talking about as potential marketing platforms (sorry, Ello), the fact is that Tumblr, so often overlooked, has somehow suddenly emerged as the new leader in the race to catch up to the “Big 3” social networks (Twitter, Facebook and LinkedIn). As of September 1, 2015, Tumblr hosts over 252 million blogs and more than 116.9 billion posts in total. If you aren’t already, you need to learn how to use Tumblr for recruiting. 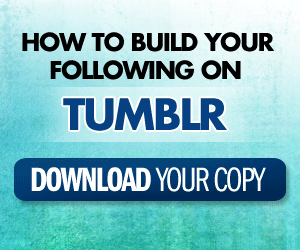 I realize some of you might be reading this and wonder what, the hell, Tumblr actually is. Which is OK, since you’re likely not under the age of 18 and don’t communicate strictly in .gifs.

As a brief refresher, Tumblr is a micro-blogging platform – which basically means (at least in my head) that it’s kinda like Facebook, but with a lower word count limit on posts and more of an emphasis on building followers for exposure instead of building a network of friends.

In fact, Tumblr users can join, post, share and like other people’s posts without ever having to connect with anyone, ever. It’s pretty easy to set up an account, but if you need a simple, step-by-step guide to getting started (or getting back on track), click here. You’re welcome.

Once you’re in, you’ll instantly notice that Tumblr functions a little differently than pretty much any other social network out there. In a world that’s somewhat obsessed with tracking cookies and clicks, Tumblr deemphasizes analytics for what amounts to your own art gallery – without having to worry about running into an old high school friend or that boss you hated at your old job.

One of the primary benefits of Tumblr is that you can post pretty much anything on there, and users do – from blog posts to external links to .gifs to videos and more. That open structure and relative lack of limitations is a big driver behind Tumblr’s user growth – and over the last year, that growth has been co-opted by a steady stream of celebrities and public figures. It’s even created a few celebrities of its own, with top Tumblr users attracting huge followings and fan bases numbering in the millions. 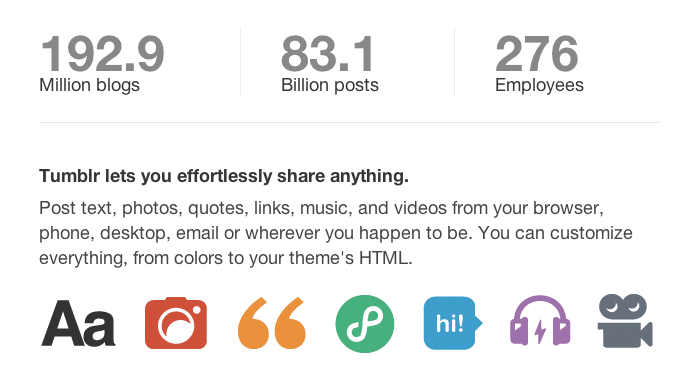 In the Inc. article referenced above, author Oscar Raymundo explains “how Tumblr became the fastest growing social network in just 6 months” as being driven by a combination of the aforementioned star power, its optimization and ease of use on mobile devices, and a steady product release cycle. In looking at Tumblr, if I had to put my thumb on one specific element that’s made this site so successful – it’s the star power.

Let’s face it, most social media users freak out when a platform rolls out changes. Remember those “bring my old Facebook back” campaigns? But somehow, Yahoo! continues to iterate and evolve Tumblr with limited objections from its highly engaged user base.

So, if consumers (and by extension, candidates) are, statistically speaking, all flocking to Tumblr, why haven’t recruiters followed suit? Normally, recruiters become a somewhat ubiquitous presence on any site that supports free job postings, even if there’s no evidence of efficacy. So where the heck are all the employer brand pages and staffing spam we’ve come to accept as a necessary evil of social media?

I’d venture to guess it’s because you, like me, are already too busy spending your time on the handful of other social sites that are a core component of your strategy and use every day – or sites that you’ve actually had some success finding and developing candidates or clients. But, the fact is, while it’s easy to ignore Tumblr, the fact is that it’s becoming too big, and growing too quickly, to keep completely off your radar.

So, once I’d seen the data, I decided it was time to dust off my old Tumblr account and see what had changed since the last time I’d logged on – and how employers and recruiters might be able to actually use Tumblr to attract top talent.

4 Ways Employers & Recruiters Can Use Tumblr 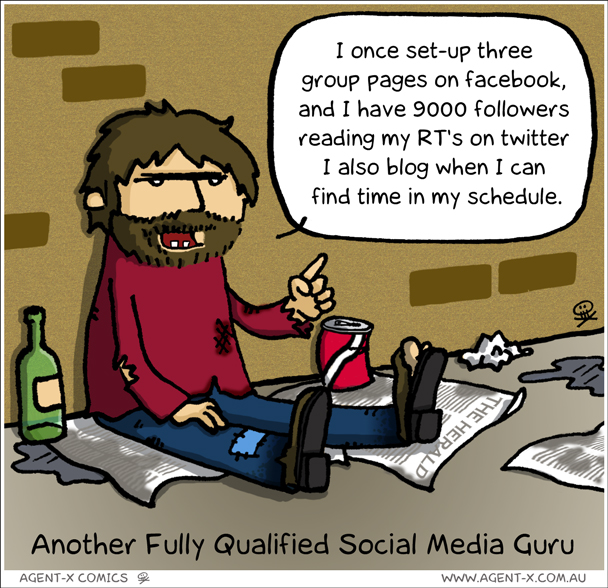 It seems like recruiters always have some network that’s the next big thing – from Empire Avenue to Pinterest to SnapChat, we’ve seen literally dozens of potential contenders come and go in a flurry of content about how awesome these networks are and how you’re just not doing your job as a recruiter unless whatever the hot new network happens to be that week.

The only problem is, these sites are just as quickly abandoned once recruiters realize that they’re just not generating any candidates or creating any recruiting ROI. Hell, it’s hard enough to get meaningful outcomes out of Facebook or Twitter if you’re a recruiter, much less these other sites with much smaller audiences and relatively limited reach.

Upon investigation, I do think there are a few specific case uses for sourcing and recruiting on Tumblr, and I’ve listed them below. But my advice is that if you’re not already on Tumblr, you don’t really have to be unless you have a reason to be there, and the commitment to actually do more than just post jobs and share career content.

But if you’re trying to recruit for one of the following areas, Tumblr just might make sense for you.

1. Gen Y Recruiting: Let’s face it, if you’re on Facebook or Twitter, you’re old. They both have average user ages of over 30, and the fact that these networks keep getting grayer is driving Gen Y to find a special corner of social media where they’re free from getting tagged by their Grandma or, worse, spammed by recruiters or sold stuff by companies.

Tumblr profiles aren’t built to be professional, and really don’t give a whole lot of insight into the user’s work history. So they’re not so great for sourcing, sorry to say.

But Tumblr is a great place to actually put a finger to the pulse of what Gen Y really cares about, how they communicate and how to build a culture that supports their needs (even if they hate that particular buzzword).

After all, 66% of Tumblr users are under 35 years old, and 39% are under 25. It’s the most popular social network among 18-29 year olds, and the fact that it’s demographics are so much younger than other social networks make it an ideal place to target the emerging workforce.

2. Social Media and Creative Roles: By now, everyone already knows how to use Facebook, Twitter and LinkedIn – these sites are all designed to be as idiot-proof as possible (which still doesn’t seem to deter most recruiters). But Tumblr’s relative lack of structure or rules means that it’s a great place to find examples of candidates doing innovative or interesting things on social media, as well as an ideal way to find samples for roles like designers or copywriters (it is a micro-blogging site, after all).

It’s also an ideal place to find social media marketing candidates – Tumblr emphasizes engagement and curation, and if you can build a following on this platform, more traditional B2B social media seems pretty passe and prosaic.

3. Entertainment Industry Recruiting: Like I mentioned before, the celebrity presence on Tumblr has been a significant driver behind its explosive growth. From Taylor Swift (OK, she’s everywhere) to the Walking Dead to the 1975 (it’s a band, not a year, by the way – just ask your kids), Tumblr is like a repository of pop culture that’s actually cool – no Throwback Thursdays or Mashable memes here.

If you want to find candidates who are highly engaged and knowledgeable about what’s now – or to inform your content or knowledge of what candidates actually care about – Tumblr is an ideal platform. OK, so maybe sourcing Taylor Swift fans seems like a scary (and creepy) idea, but for the right company culture, it could be key.

4. Company Careers Pages: Now that Facebook is changing their algorithm (again) to remove any posts it flags as promotional, particularly those coming from company pages that aren’t paying for the privilege of showing up in news feeds, Tumblr could represent an ideal replacement for creating an employer brand focused destination that’s visible and creates reach without ponying up a premium.

After all, it incorporates the emerging media like photos and videos that satisfy the voyeuristic qualities people love about Facebook (or employer branding) without the algorithm that basically turns company pages into a tree falling in the woods. If you want to get heard in a place where there’s not a whole lot of noise, Tumblr could just be a practical solution to your social recruiting problems. But I wouldn’t count on it.

So, Tumblr is hot right now, but as far as using it for recruiting and sourcing, the things that make it so attractive to users could, if other networks are any indication, become quickly eroded if it was widely adopted as part of an employer’s social media strategy. After all, most of the site’s users turn to it specifically to get away from your brand spam in the first place.

Like any other social network, recruiting efficacy isn’t about the medium – it’s about the message. When using social media to recruit, you always have to check out the metrics. And if your social recruiting strategies aren’t working on other sites, Tumblr isn’t the answer to your problems. But it very well could be if you’re having success on social or simply want to extend the reach of the stuff you’re doing that’s already working.

Phenom expanded its platform to include personalized solutions for HR leaders and HRIS teams, building on its single platform for candidates, employees, recruiters and hiring managers. New features include a… Read more

A number of talent acquisition conferences are out there trying to get your attention. So which ones are worth attending? To help identify the best of them, we asked HR… Read more