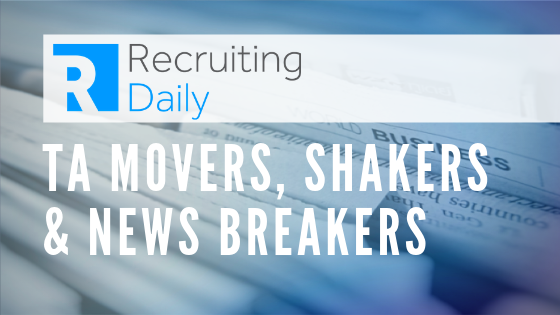 Feels like Labor Day was yesterday and yet, here we are halfway through the month already. As predicted at the end of August, we’re starting to see another uptick in announcements as many companies get ready for the fall conference season, with several international players entering into the mix. And we’re not talking just talent acquisition either, with news coming from ends of the HR technology space these days. Here’s what we’re tracking:

Lots of new research for starters – some good, some unsettling. Let’s start with the latter. According to a new study coming out in the journal Organizational Dynamics, men are struggling in the wake of the #MeToo movement, particularly when it comes to interacting with female colleagues. The report shows 27 percent of men avoid meeting one-on-one with female coworkers, while 21 percent said they would be reluctant to hire women for a job involving close interaction like business travel. These numbers are up over 2018.

At the same time, the Washington Post published a piece indicating that there’s a surge of minority women entering the U.S. workforce. The uptick helped flip the switch on historic hiring trends, with most new hires of prime working age (25 to 54) being people of color. It sounds like the call for increased diversity might be starting to take hold.

Vendors got in on the action too. Data and analytics firm Qlik revealed that enterprise organizations value practical data skills over formal degrees, citing the ability to upskill employees as needed. Says the research, some 59 percent of global enterprises rank prior experience or a case study interview as the top indicator of a candidate’s data literacy. Only 18 percent see a relevant degree as the most important factor in hiring.

Meanwhile, the folks from Kronos and Future Workplace, operating as The Workforce Institute shared findings on the “Global State of Managers.” This research includes a manager report card, calling out generational differences, a global breakdown, and some overall thoughts about the effectiveness of bosses. Notably seven out of 10 people think they can do their boss’s job better.

Continuing to pull on the generational thread, performance management solution 15Five released “The Next Generation Workplace,” looking people management, work-life balance and changing employee expectations. This research found that 48 percent of employees believe they could do a better job than their manager and that a lack of confidence in their boss inspires 20 percent of employees to leave within six months.

The people and culture platform, CultureAmp raised $82 Million in Series E funding, which it intends to put towards ongoing global expansion and product development. The company acknowledges the timing of its success sharing, “We’re living in a world where more people than ever are starting to understand and embrace the importance of people and culture at work.”

Across the pond, graduate recruitment and career guidance platform, JobTeaser announced $55 M (£45 M) in Series C funds. JobTeaser shares that funding will go toward expanding the company’s career service and partner network of schools and universities across the U.K. and Ireland.

On-demand talent platform, Stoke, out of Tel Aviv, pulled in $4.5 M for its seed round. The company aims to solve for the everyday challenges of hiring freelance talent, creating a unified interface that integrates with popular online marketplaces while providing the tools to onboard and manage other external talent populations.

HCM technology giant Ceridian announced its intention to acquire RITEQ, an Australian provider of enterprise workforce management solutions. RITEQ currently operates in Sydney, Melbourne, Brisbane, Perth, New Zealand and the U.K. This is Ceridian’s second move down under in 2019, launching its Dayforce Payroll solution to the Australian market back in April.