Membership
Home / Articles / Survey: “Re-Skilling” Your Workers Not Only Important, But Damn Near Mandatory

Survey: “Re-Skilling” Your Workers Not Only Important, But Damn Near Mandatory 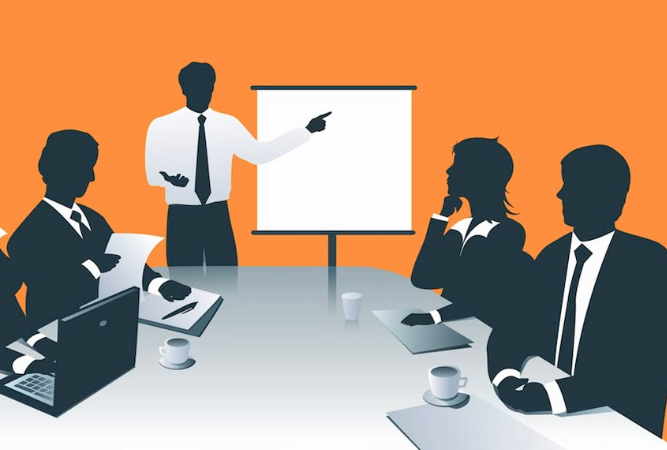 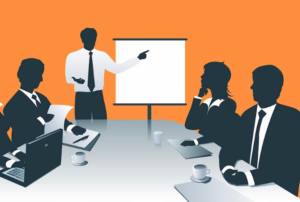 Of all the buzz words and phrases in the workplace, it’s the one that seems to give both workers and managers the greatest amount of angst. You know what I’m talking about — the dreaded skills gap.

Some new research out this week — the 2017 Skills Gap Report from Udemy, which touts itself as “the global marketplace for learning and teaching online” — found that “the majority of workers around the world think there is a growing skills gap but feel optimistic about their own skills and the competitiveness of their respective countries.”

The first paragraph in the report hits this issue squarely on the head:

Udemy’s 2017 Skills Gap Report found that the vast majority of Americans (79 percent) feel the U.S. is facing a skills gap, and more than one in three say it affects them personally. However, looking beyond these numbers reveals a confused workforce struggling to take control in the face of constant change. When it comes to perceptions about and responses to shifting expectations for jobs and careers, the American workforce is divided across gender and generational lines.”

Yes, it’s a mixed message when you ask Americans about their skills, and as the survey found, workers everywhere are pretty anxious about the changing demands of their jobs and are trying to figure out the very best way to keep their skills up to date. 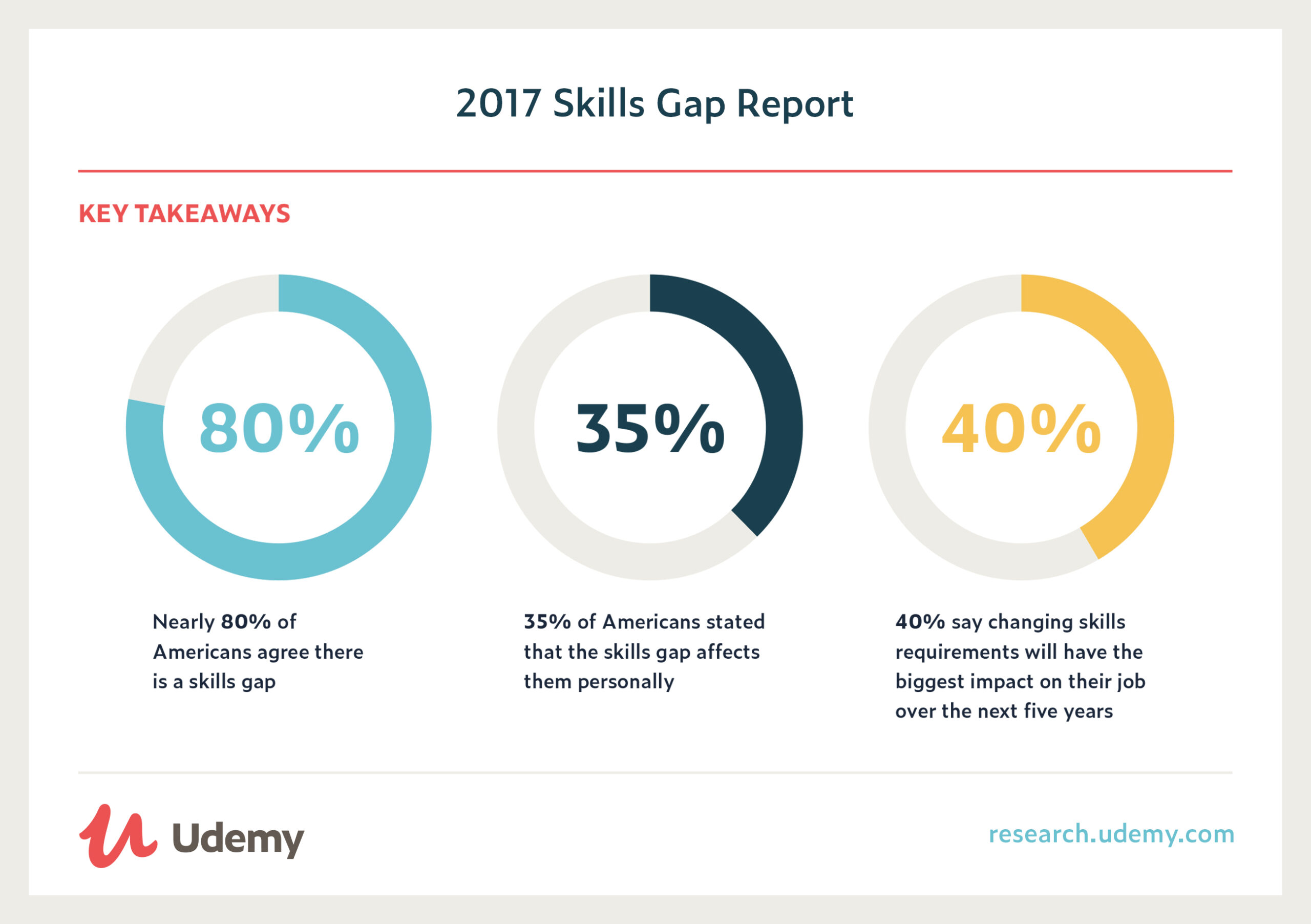 How Americans feel about the skills gap

But, people also differ on the impact of the skills gap and who should be responsible for helping them in their re-skilling efforts. Concerning American workers, for example:

“The nature of jobs is quickly changing with automation, globalization, government policies, and other factors, making it impossible for anyone to predict which skills a job will require in the future. This only serves to widen the perceived skills gap,” said Udemy CEO Kevin H. Johnson, in a press release about the research. 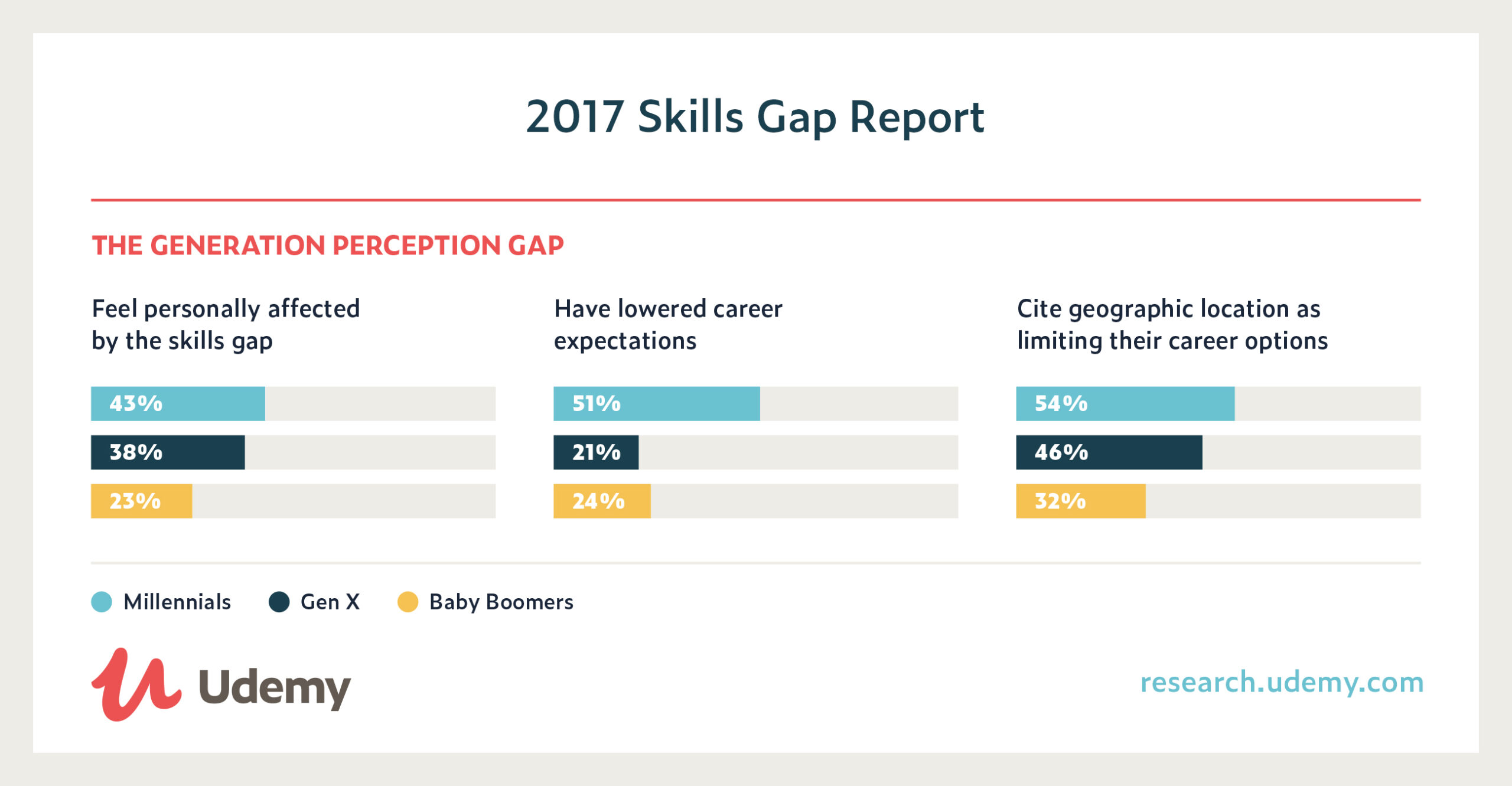 He added: “In such an uncertain environment, it’s not surprising that workers are confused about how to plan their careers, but we’re encouraged to see how many of our survey respondents are learning online on their own and are hungry for more and better training from their employers.”

The skills gap is a global concern, too

This shouldn’t come as a great surprise, but the 2017 Skills Gap Report also found that the skills gap issue is not only critical to American workers but is a concern around the world as well. In fact, the survey results from five key global markets — Brazil, France, Germany, Mexico and Spain — showed widespread acknowledgement of a skills gap but very different perspectives of the personal impact. For example:

The critical importance of “re-skilling” your workforce

Here’s my take: Training and re-training (or re-skilling, to use a current buzzword) is critical in an environment where knowledge doubles every year and skills have a half-life of 2.5 to 5 years, as Caroline Stokes pointed out here on RecruitingDaily last summer. 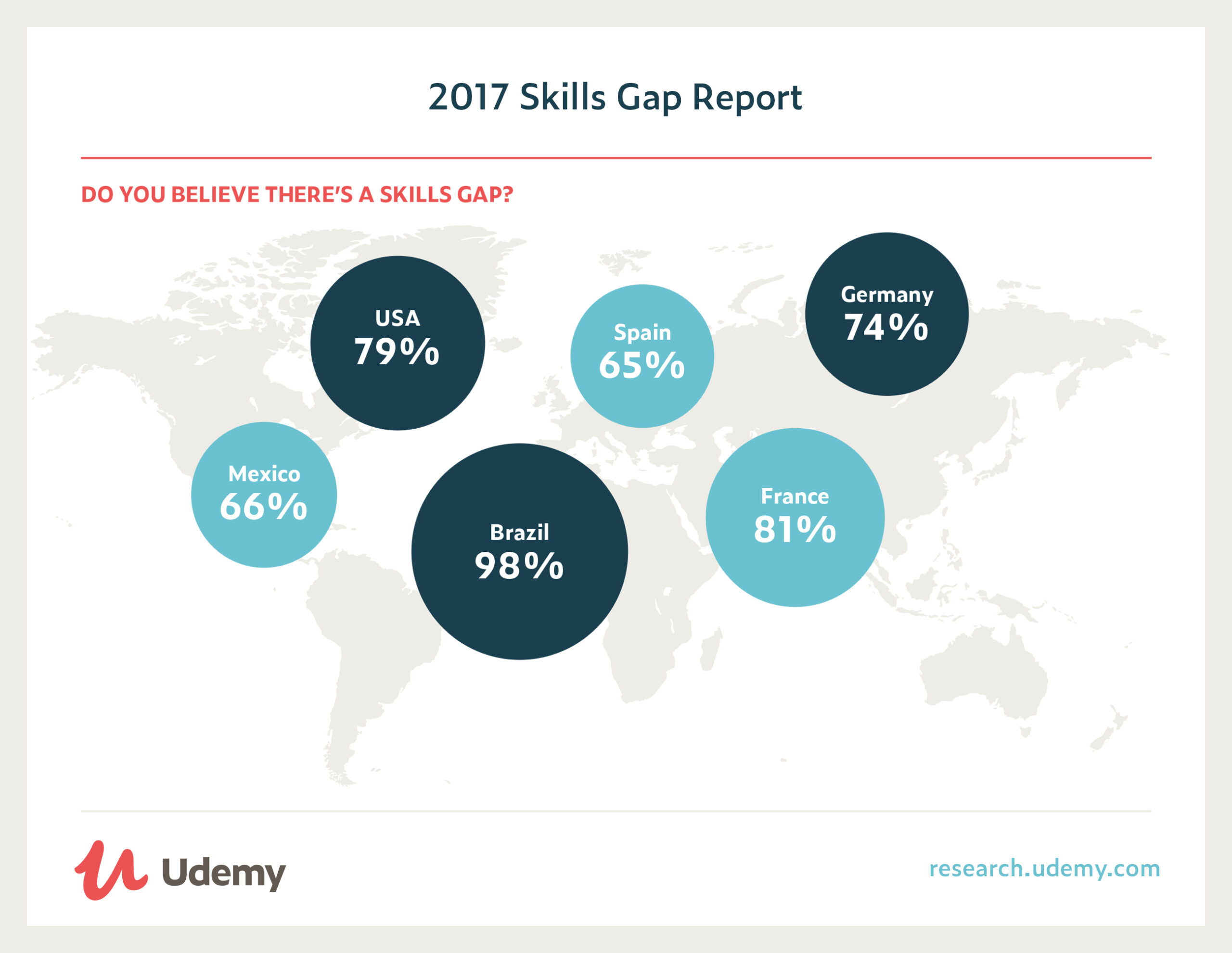 Technology is driving much of this because it’s changing so rapidly that people are finding it hard to keep up with the changes, as anyone who has bought a new smartphone has discovered. And, far too many employers are still working from the premise that people you hire must have all the requisite skills and experience needed to do the job from Day 1.

Organizations everywhere are waking up to the fact that they need to spend more on training and development, and that “re-skilling” your current workforce is not only important but damn near mandatory as technology drives more (and quicker) changes in your workplaces.

Here’s how the Udemy report put it:

Overall, the 2017 Skills Gap Report shows Americans see a bright future for the country and feel they have a lot to offer potential employers. Yet, there are also signals our attitudes around work are changing. Younger workers, in particular, may be starting to recognize that a college diploma won’t carry them as far as it used to, and this new reality is pretty scary when you’ve got decades to go before retirement. Since no one can predict with certainty what exact skills will be needed in years to come — not universities, not government, not employers — today’s workers will have to be up-skilling and re-skilling continuously.

Americans aren’t afraid of doing that hard work. They are confident, they are optimists, and they believe in self-sufficiency. But they also recognize when people need a helping hand. This is where employers can step up by investing in their people and promoting a culture of continuous learning. Governments, in addition to encouraging STEM education among current school students, can also do more to help mid-career adults access and pay for re-skilling programs. By sharing this responsibility, we can build a workforce that will remain competitive, even in an unknown future.”

We’re at a point where training and re-skilling employees isn’t just something for companies to consider doing a little bit more. It’s a critical component of what your organization needs to grow and stay competitive in the months and years to come.

That’s why you should take some time to dig into the 2017 Skills Gap Report (you can get it here), because once you do, you’ll know why it so important that you make “re-skilling” part of your ongoing culture and workplace agenda in 2018 and beyond.

The 2017 Skills Gap Report comes from an online survey for the U.S. that was conducted by Toluna Group on behalf of Udemy in September 2017 among more than 1,000 U.S. office workers in full-time jobs who are ages 18 or older. Complete methodology for all countries surveyed available upon request.