Man And Machine: The Real Future Of HR Tech 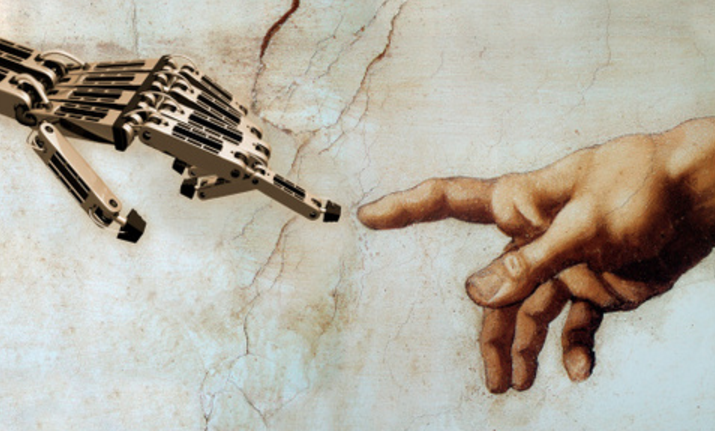 It’s both scary and fascinating what the world of robotics is getting into these days. There are drones, robots who can deploy and yes – even a killer robot. And no, I’m not talking about Terminator. There are machines that can decipher codes, drive our cars – really the possibilities are endless. The initial introduction of robots was cool but now, it’s pretty scary. I mean, we saw a robot kill someone in the last few weeks.

As we slowly introduce more technologies that function autonomously we can feel ourselves losing control to the algorithms and statistics that drive samples, but can’t encapsulate the human experience. Or so we think. We talk about artificial intelligence, virtual reality and all the opportunities we’re starting to imagine for them thanks to PokemonGo,

Of course, that sends some shock waves toward people in the workplace. If you can push the button, so can a machine.

However, technology in recruiting has made it much easier to make informed decisions more quickly. Despite a mere two-and-a-half months stint in sourcing research, even I, a witless peon, know that things are so much more convenient these days. The monotony of rotary phones, writing on color-coded notecards, keeping physical files on people… blech. I’m happy people don’t have to do that stuff anymore with modern computer technology. It’s great that there are plenty of tools nowadays to assist with the recruiting game.

Recruiters are story tellers and they still tell stories of pre-job board, stacks of resumes and calling all day to find the right person or find the company that would pay the commission. Today, so much of that happens from a laptop before you ever pick up a phone. What was once the primary form of communication is not what it used to be and one of the least favorite methods of my generation.

There is still a huge need for recruiters to do what they do, however. Technology doesn’t simply replace them. Technologies that embrace complementarity between man and machine are the biggest players right now. Social media sites for professionals aren’t simply replacing replacing recruiters outright. They are built with software that complement the goals of a recruiter without removing the human element. Software mogul Peter Thiel emphasises the “power of complimentarity” in his book Zero to One: Notes on Startups, or How to Build the Future. He cites complementarity as a key feature in the success of companies he founded like PayPal and Palantir.

Thiel’s Principle: The Proper Balance of Man and Machine

“Complementarity between computers and humans isn’t just a macro-scale fact. It’s also the path to building a great business.” (Thiel, 144)

So what does that mean, anyway? Take a look at PayPal. They were losing millions every month in 2000 solely due to credit card fraud. At first, they tried a software solution to catch and reverse all of the fraudulent transactions but criminals adapted and got around it too quickly. In the end, it was an algorithm that worked in conjunction with human efforts that prevailed at putting PayPal back into the green.

“This kind of man-machine symbiosis enabled PayPal to stay in business”  said Thiel, who credits Palantir’s success to the same harmonic coupling of humans and software. Palantir software couldn’t have found Osama Bin Laden on it’s own, just as the analysts couldn’t have found him without Palantir. According to Thiel: “Better technology in law, medicine and education won’t replace professionals; it will allow them to do even more.” (Thiel, 148).

When I look at our own current tech landscape, I can’t help but see the same thing. Recruiting is, and always will be part detective work and part sales. It’s all about how you establish motives, discover hidden talent (and hidden reputations), and persuade the best one to sign the line and join your company. There’s no way a machine could take it all on. The tech that will fail, is the tech that tries. This is why the best recruiting software is software that lets the recruiter be the recruiter. Whether we like it or not, human resources must continue to be run by humans to be any good. That’s why technologies that amplify recruiter productivity are and will continue to be the the most valuable in the recruiting world.

Through my internship, I have been able to become closely acquainted with a lot of the recruiting technology out there. Getting on the inside of HiringSolved has given me a very intimate knowledge of their technology, specifically. I might be biased but I think HiringSolved’s technology fits Thiel’s ideal mold. It’s a complementary tool because it doesn’t try to replace recruiters.

Instead, it takes all the grunt work out of sourcing on the web by automating the process of compiling composite profiles that use information from disparate parts of the web. For everything else, you need the recruiter.

Another important topic Thiel touched on with technology was to be wary of the “big data” fad. To him, more data doesn’t always mean more value and “big data is usually dumb data” (Thiel, 149). This is where it is interesting to see the inner-workings of a recruiting technology and how the engineers actively seek to filter dumb data out of their results. That’s another area where the machine loses. I know this because I know that a majority of HiringSolved’s data is dumb – or at least not smart enough to actually appear in searches through the service. This is by design. The engineers block profiles from appearing that aren’t up to snuff. For the millions of profiles that are visible, there are millions more that are locked in an attic where they will continue to reside there until they meet some vital criteria. They’ll be locked away until they’re decent and presentable. Machines know how to get a lot of data. People need to make it smart enough to know what data is worth it.

This thinking is akin to Thiel’s thoughts on how “the most valuable companies in the future won’t ask what problems can be solved with computers alone. Instead, they’ll ask: how can computers help humans solve hard problems?” (Thiel, 150).

People have romanticized the role of computers in doing everyday tasks without thinking about the massive human contribution. “We have let ourselves become enchanted by big data only because we exoticise technology. We’re impressed with small feats accomplished by computers alone,” (Thiel, 149), but we’re ignoring the human contribution and impact. Even if computers will someday become sentient enough to outsmart and dominate humans, Thiel predicts that this won’t really be something to worry about until the 22nd century or so. There’s plenty of time for us to take advantage of technology that makes us better at what we do that already exists.

About the Author: Christopher Murray is a growth hacker at HiringSolved. He’s also a Gangplank Chandler community member and volunteer where he supplies a weekly newsletter and blog. When he started with HiringSolved in November 2014, his knowledge of sourcing, HR, and Recruiting were at first based on frantic Google searches and blog skimming. However, he has since been able to immerse himself in the knowledge of the space and continues to gain insights to help him form opinions. Christopher has a strong background in freelance writing, hacking, and marketing. His duties at HiringSolved include site content growth, writing patents & press releases, conducting email blasts, and charting their marketing trajectory in the new media landscape.