Membership
Home / Articles / Unleash 2018: Innovation comes from the bottom, guys (or should)

Unleash 2018: Innovation comes from the bottom, guys (or should) 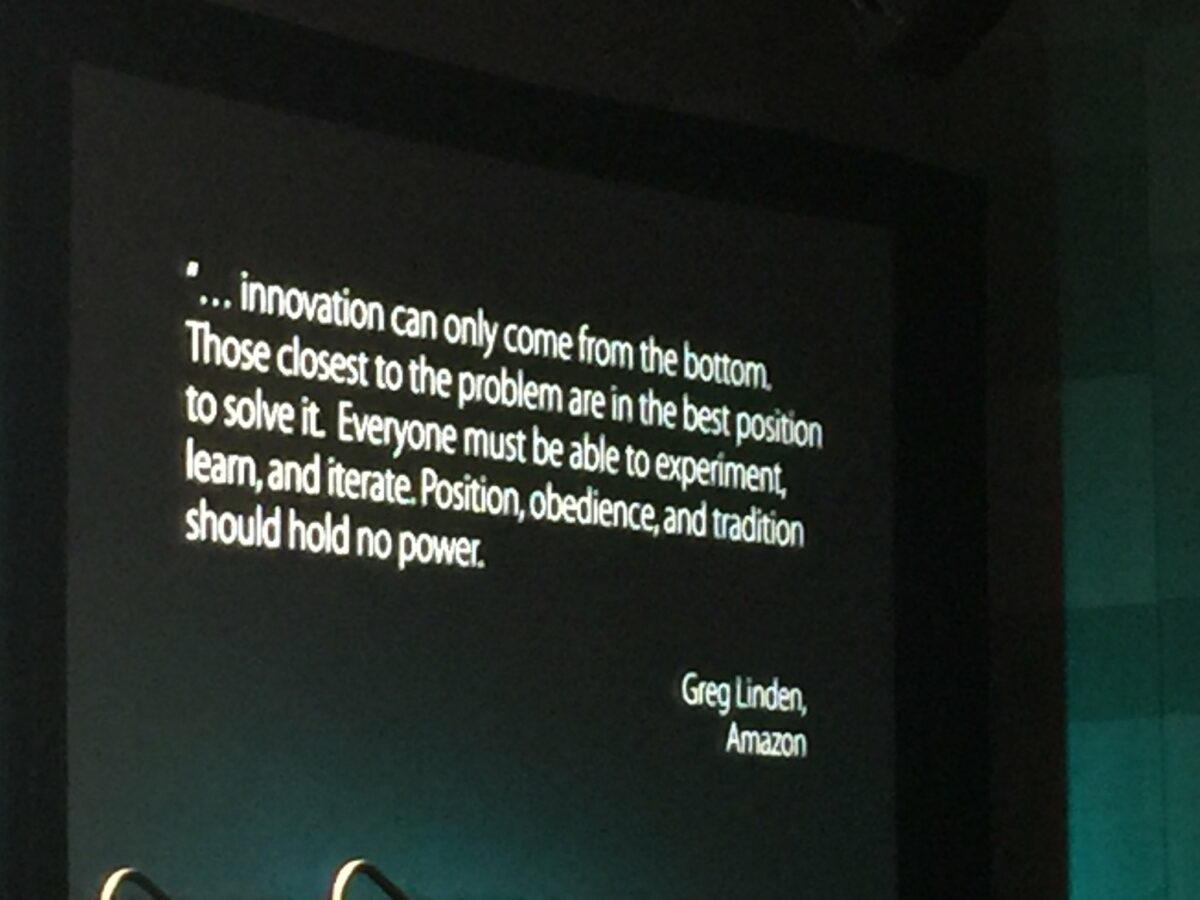 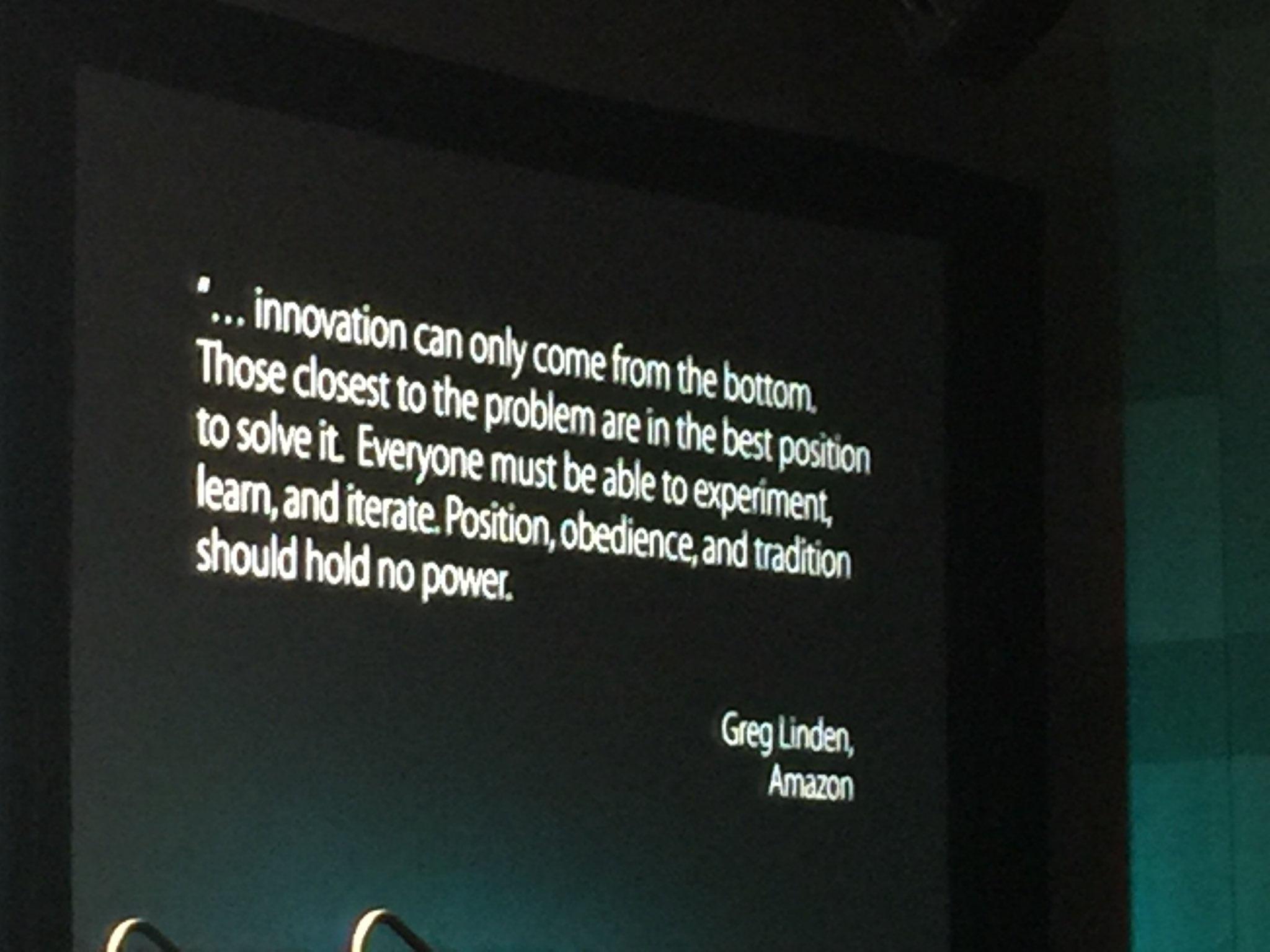 The above quote is from Greg Linden of Amazon — if you don’t know him, he’s one of the early Amazon engineers responsible for the recommendation engine — and was used by Gary Hamel in the Unleash 2018 opening session he gave.

While this idea is often not understood by executives, who often feel true change and innovation only occurs at their level, in fact it’s very true. Let’s explain with some deeper examples.

I want you to start with this TED Talk.

Linda Hill is the speaker. She’s a professor at Harvard (vetted), and has a whole professional narrative around “Being The Boss” (even a website, naitch). She’s also written a book called Collective Genius.

Why does anything about creativity or collaboration matter?

This stuff is pretty fascinating to me — and should be to you.

First of all, no matter how hard you try or how good you are at your job, it is impossible to really do your job without working with other people. No one really wants to collaborate at work by some measure, but that’s neither here nor there: you have to. We’ve been talking for decades about “brainstorming,” but that makes no sense at all.

So basically, if you want to succeed as a company, you need collaboration. But at the individual level of a company, people don’t really want to collaborate — and managers are relying on an outdated model of what successful collaboration even looks like. This is a problem, no?

How could we think differently about collaboration?

Linda Hill’s talk is pretty good. She goes full-hog on Pixar and Google. If you’ve ever sat through any “How To Improve Your Business Speech,” you probably want to jab your pen into your thigh when someone brings up Google. Everyone tries to emulate them in terms of management + leadership approaches, and almost no one gets it right. (Breaking news: the secret is in respecting people and giving them autonomy.) When you meet a conventional business dude at some seminar and some speaker brings up Google, he automatically says, “Well, they have a lot of money, so I mean, we can’t do that… we’re struggling to make quarterly projections!”

(No shit, dude. Google struggles to make projections here and there too. That’s life. But maybe if you didn’t treat your rank-and-file like farm animals you wouldn’t be chasing a faded dream each quarter. But I digress.)

So point being, Linda Hill probably lost a few people with her constant references to Pixar and Google, but her research involves a diversity of companies aside from them, so it’s all good.

Now we get to the interesting section. She had two slides, right? Here’s the first one: 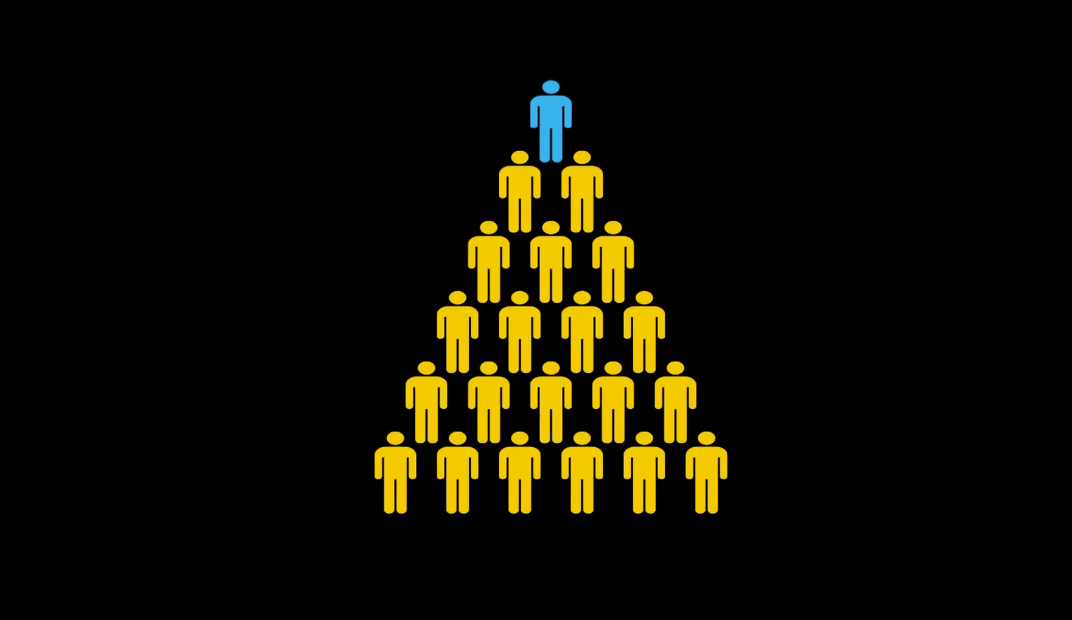 That’s how most companies make decisions — the blue guy, i.e. the guy with the most organizational power, makes the decisions. That’s how most places I’ve ever worked (all sizes) tend to be. 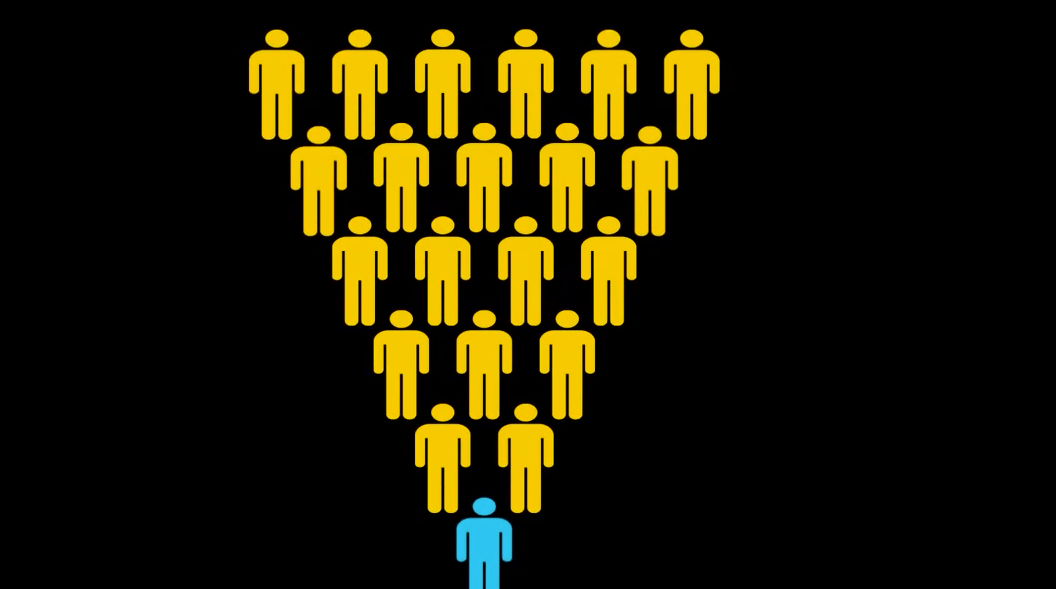 See what happens there? The blue guy — with the power — is at the bottom, and the suggestions/ideas of the rank-and-file rise to the top. This is actually similar to how Reed Hastings runs Netflix, and they’ve been a pretty successful company.

There’s one major problem in the way of this approach, notably “People with power don’t like to sacrifice their power.” Here’s a little bit more on one aspect of that.

There’s been a bunch of research done on how being vulnerable and open can actually make your life more fulfilling, and I’d say that probably works in business as well: if you’re willing to sacrifice that notion of formal power for a second, you can drive much more successful outcomes. It’s pretty logical, actually: the rank-and-file (the yellow guys who move to the top in the second slide) are actually the closest level to the customer, give or take. The customer needs to buy your product, and that’s how you make money. So why wouldn’t you listen to the potential experience enhancements of those who deal with the customers the most?

Just because you’re “the big boss?”

Think on all this differently if you want to truly be innovative.