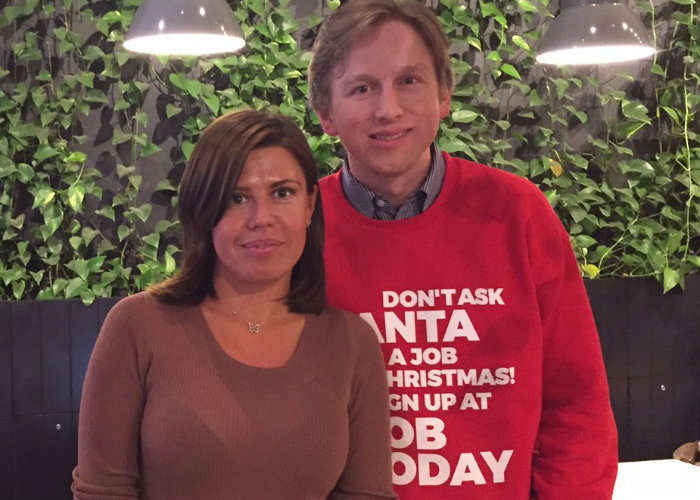 How long has the recruiting industry been saying, “This is finally the year of mobile”? I’ll put it at roughly 2008. The combination of a risk-averse customer, timing and legacy systems has made mobile a tough sell to employers.

Not saying 2016 is the year mobile finally breaks through, and I’m cynical that next year will be much different. However, it’s not going to stop innovation and the flow of money.

Enter Luxembourg-based Job Today, available on Android and iOS, who just raised $20 million in a Series B to grow its mobile-first solution to the masses. This follows a Series A round that saw the company raising $10 million in 2015, the year of its founding. Currently serving Spain and the UK exclusively, the new funds will help free up the organization to set its sights on the U.S.

“We’re looking to bring it to other European markets including Germany,” said Job Today cofounder and CEO Eugene Mizin. “We also are very keen to launch in the US in 2017.”

The company employs around 50 people across Luxembourg, Barcelona and London. They claim to have attracted 2 million job candidates and 150,000 businesses to the platform since launching in May 2015. Their roster of clients includes Starbucks, McDonald’s, Pizza Hut, Subway and Holiday Inn. They tout processing “close to one million” job applications every week.

How does it work?

Employers create very short job postings, almost like the old days of 5-line newspaper ads. Job seekers create a short profile that takes a few minutes. From there, they can apply for posted positions pretty easily, as there is no custom apply based on company requirements.

There is also a built-in messaging feature, similar to Facebook Messenger or iMessage, which accommodates real-time conversations between employers and applicants. Employers can manage applicants similarly to how they manage email or text messages on their smartphone. The app focuses on speed, claiming a 24-hour turnaround before a candidate will be contacted by an employer.

The platform requires messaging to be done by a human-being, as opposed to leveraging a chatbot like services such as Mya and Olivia. Jobs also must be posted within the Job Today platform, as opposed to pulling in jobs via API. Both of these hurdles will deter many companies from using the app to hire, but companies desperate for bodies will be more open to using the service. Industries that are historically on-the-go, such as healthcare, hospitality and retail, will be more likely to entertain the solution as well.

One of the things I like about the business is that it doesn’t rely on existing systems, however. When you look at many self-proclaimed mobile-first solutions like Jobr or Work Here, they tend to rely heavily on pulling in job content from applicant tracking systems, which aren’t always the best user experience. Shrinking down a 17-inch laptop screen into a 4-inch smartphone rarely makes the best sense.

Similarly to how Tinder got dating-on-mobile right by rethinking a traditional model of personal ads, the employment industry needs to do the same. Simply making your job postings readable on a mobile phone isn’t enough to move the needle.

Only time will tell if the Job Today model can redefine employment in a quickly evolving mobile-first ecosystem, but I like seeing more and more competition in the space. Additional solutions like ipply, tilr and Switch are a positive step forward to finding mobile recruitment nirvana.