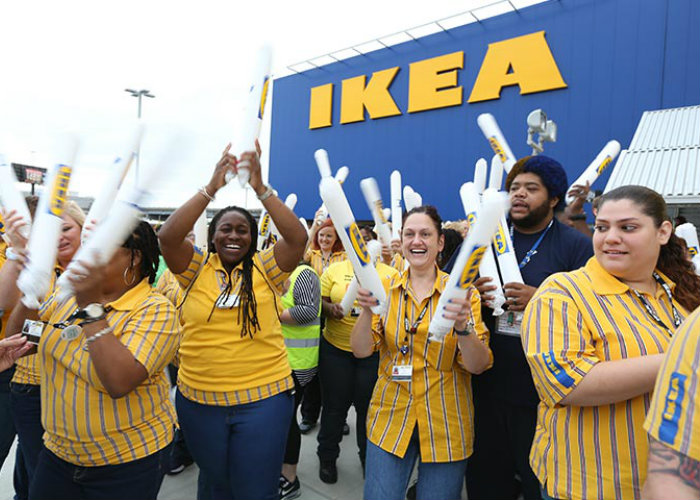 The US division of Ikea will begin offering employees longer parental leave. The move comes after tech companies such as Netflix offering similar benefits to retain their great workers as the job market continues to improve.

Ikea released a statement on Tuesday saying that they will offer their 13,000 U.S. employees, both those on hourly rates and salaries, paid parental leave of up to four months. The policy comes into effect on January 1st and it will apply to both mothers and fathers who become birth, adoptive, and foster parents. Previously Ikea were offering their female staff members who gave birth five days paid leave as well as between six and eight weeks of paid disability leave.

This latest move from Ikea is part of the company’s drive to create a better relationship with their workers and it follows two years’ worth of pay increases bringing the average minimum hourly wage for Ikea workers up to $11.87. Many companies are trying to retain their best workers given the record lows of unemployment.

President of the U.S. division of Ikea Lars Petersson talked to the Associated Press and said that expanding parental leave will make employees feel better about where they work and deliver a better service to their customers as a result.

He said that Ikea wants their employees to take time off. Ikea deals in the home and they believe that one of the most important things for a person is their home.

The plan would give Ikea employees that have been with the company over a year up to three months paid leave; with full base wage paid for the first six weeks and the rest will be for 50% base wage. Employees that have been working for three years or more receive up to four months of time off with full pay for the first eight weeks and half pay for the second eight weeks.

Overall the U.S. falls behind other countries when it comes to paid maternity and paternity leave. For many people in the U.S. there is little leave offered outside of short-term disability leave. Federal law mandates that a company needs to only offer unpaid leave following the birth or adoption of children. Some companies including Netflix, Microsoft, and Adobe have begun making changes recently.

Netflix made an announcement last year that they would begin offering parents the chance to take “unlimited” paid leave after the birth or adoption of children; meaning that new parents are able to take as little or as much parental leave as they want up to a year. Target Corp. also announced an expansion of their plan. Now hourly and salaried employees of Target who have been working over a year and work an average of 20 hours per week can get two weeks paid leave. This offer applies to employees that give birth, their partners, those who become parents through adoption and surrogacy, and foster parents.

Still, Ellen Gallinsky, the president of the non-profit research group Families and Work Institute, says that these companies are not representative of the current situation in the American labor market.