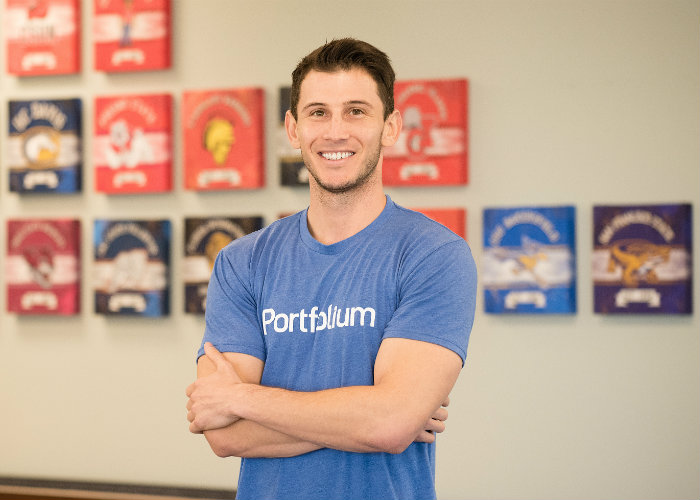 Portfolium, an 18-person start-up based in San Diego has raised $6.6 million in a first round of venture capital funding, led by SJF Ventures. The company was launched in 2014 by CEO Adam Markowitz, an aerospace engineer with a degree from USC.

The company gives college students and recent grads a digital platform for highlighting their academic projects to prospective employers. Think LinkedIn with a better stylist, including a nice hero image in the header and a section dedicated to your college portfolio. Here’s an example.

“In every classroom, in every city in this country, there are students being left behind by a recruiting system that simply isn’t equipped with the radar to detect their skills and talents,” Markowitz said in a recent interview.

The idea of creating pretty online portfolios isn’t new. Ten years ago, Zolio took a stab at the market. A lack of funding, or maybe just timing killed the company. Many will remember VisualCV, which never made it to the Hall of Fame either.

Count Zolio cofounder Andria Loczi a fan. “It looks like a great platform,” she said. “I really like how they’re featuring not only portfolios, but the project a user is working on which an employer can browse. Success for platforms like these all boils down to focus. If they can continue to focus on the portfolio-building user experience, keeping it clean and easy to use for students and recent graduates, they’re filling an important need in the marketplace.”

Three years ago, I wrote “This Reinventing the Resume Needs to Stop,” saying, “There’s a reason resumes are the way they are. They work. They work because they’ve become standardized. Recruiters know the format. Job seekers are taught early on this format. And if they aren’t, Google searches are there to show them how it’s done.”

Maybe I’m wrong. Maybe I should just realize I’m one of the old timers the site disses. A 2011 book entitled “How Cool Brands Stay Hot” says only 13 percent of millennials use LinkedIn. I’m betting it’s a lot higher 5 years later, but maybe Gen Z has an affinity for an online portfolio versus some Word document.

Portfolium touts 3.75 million students and 200 places of higher education in its ranks. The service is free to students. It makes money by selling access to its database, just like those old farts at LinkedIn. Colleges can also pay a small fee to access data and analytics tools if they’d like information on their students who use the service.

Ryan Craig, managing director of University Ventures, added “Portfolium has revolutionized the ePortfolio by reconceptualizing it as the basis for a competency marketplace wherein students present work samples demonstrating competencies and employers search and match based on employment needs.”