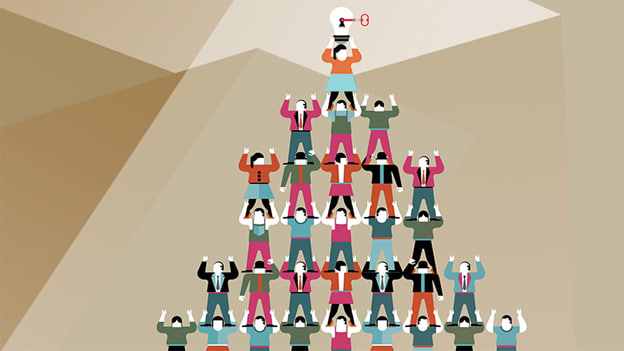 Culture fit is not about everyone thinking the same – it is about utilising the unique strengths of a group of a people, to achieve mutual goals in the most efficient way.

When we use the word ‘culture,’ we mean the social order of an organization: its collective values, drives, goals, and codes of behavior.

Culture fit is defined by Adrian Furnham, international authority on workplace psychology, author of 85 books and over 1,200 papers, as:

“…congruence between the norms and values of the organization and those of the person.”

Collective Intelligence, Not Individual Brainpower, Is Our True Evolutionary Heritage

Humans are unique in their degree of collaboration, altruism, and communication, compared to other animal species– more than anything else, culture, defined as shared values and goals, and the ability to work together to achieve those goals, is what makes us human.

Work by psychologists such as Shalom Schwartz and E.O. Wilson has demonstrated that humans have a natural built-in capacity for reading and responding to group culture. Additionally, leading comparative psychologists such as Michael Tomasello, one of the directors of the Max Planck Institute for Evolutionary Anthropology, theorize that the ability to solve problems collectively, rather than raw individual intelligence, is what gives humans their true evolutionary advantage.

Psychologists have demonstrated that only collective intelligence, not average individual intelligence, or even having a genius in the group, reliably associates with success in problem solving (Williams-Wooley et al, 2010).

Why should this be? Culture fit is not about everyone thinking the same – it is about utilising the unique strengths of a group of a people, to achieve mutual goals in the most efficient way. Researchers into so-called cognitive diversity found that teams which contained multiple perspectives and thinking styles solved problems faster than teams where members were very similar (Reynolds and Lewis, 2017). Cognitive diversity is therefore indicated to be a key component of collective intelligence.

Psychological Safety: The Cultural Glue Holding It All Together

Underlying this diversity is an even more fundamental concept. Google’s Aristotle project, and Good&Co’s own quantitative studies of team dynamics – clearly demonstrates that it is psychological safety, or trust, which predicts team success. This is the glue which holds a cognitively diverse team together, and therefore promotes high collective intelligence.

Competence without culture does not predict success, but a culture of mutual respect and support makes the whole greater than the sum of its parts.

Costly traditional hiring approaches are increasingly replaced by a focus on hiring for soft skills. According to research by LinkedIn, 58% of hiring managers agree that a lack of soft skills is limiting their company’s productivity. The six attributes looked for by managers hiring for soft skills were culture fit, collaboration, leadership, growth potential and prioritization.

All these attributes can be argued to follow from culture fit:

Hard skills can be taught more easily than soft skills, and people can learn most effectively when they are supported, committed and feel a sense of personal ownership over their work.

In an article discussing the relative importance of hard and soft skills, senior HR manager and recruitment expert Dana Parkinson points out that many people feel it is easier to train the right person in the technical skills in a time period shorter than having someone become a better fit, in spite of stellar technical skills.

By promoting soft over hard skills, an optimised organizational culture results not in automatons who excel in a specific function, but well-rounded, multi-skilled individuals who understand their role in the wider context, and therefore function more smoothly as a team.

Research has demonstrated that happy employees with a good fit to their organization are a third more productive, three times as creative in their work and significantly less likely to quit. Conversely, poor fit costs companies billions a year in lost productivity and fast turnover of employees. Eighty-nine percent of hiring failures happen because the hires were a poor cultural fit.

Research into culture shows a strong relationship with job satisfaction, performance, commitment and retention. Scientific research, such as the 2003 review and meta-analysis by Kristof‐Brown and colleagues in the academic journal Personnel Psychology, shows that more than two thirds of the differences between people in job satisfaction, commitment and performance is explained by the quality of their fit to an organization. This is true even for personal values such as politics.

A Celebrity Example Of Culture Over Competence: The Beatles

The Beatles’ drummer, Ringo Starr, replaced original drummer Pete Best not because of his skills, but

because he fit better with the band’s culture. As John Lennon famously replied, when asked whether Ringo was the best drummer in the world, ‘he’s not even the best drummer in the Beatles.’ As a group, the iconic band achieved longstanding global success not because of their technical proficiency in music, but because of the magnetic culture their respective personalities created.

Research from multiple perspectives – both academic and industrial – strongly supports the crucial importance of culture in providing competence with a vehicle through which potential can be realized. An individual may have a good idea, and some of the skills needed to realize it, but very few good ideas can be implemented without a team. Culture is the essential, fundamental ingredient for teams to harness the power of collective intelligence, and truly succeed in achieving their goals.