The Amex Job; My First, and Last, Cease and Desist Story 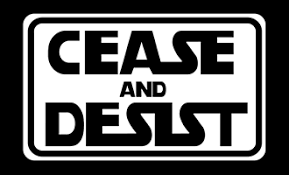 “There’s a saying that you can’t put a price on a human life, but that saying is a lie because we have. We have, and it’s so much lower than you would think. Yes, human life has its price like anything else, and will continue to do so for as long as it doubles as a commodity.”
― Nenia Campbell

I think some of the best stories I have are from my days toiling behind a computer, a fan, and a phone while working at an agency for just about minimum wage with a hope of a great commission, a good night’s sleep, and to continue adulting on.  I have learned that I sometimes go, shall we say, too far when I am aggressively looking for candidates; even to this day.  That being said ANYTIME I see a leg up or an angle that would allow me to grab good candidates and this little ditty is about just that.  As a sidebar, I think it ironic that this going up on the very site that was sued by RHI after my investigative post of poor business practices that RHI seemingly did not know about.

Agency recruiting is a great deal different than being in-house and I think everyone in the industry would agree that from compensation to candidate/manager experience we have different roles to play.  We are the font line sourcing and recruiting the best candidates we can find at the budget we can pay.  Differentially though its often rare that an FTE in-house recruiter would bring on a contract employee that is normally done by agencies, less hassle as 1099 work can get sticky with taxes etc. and that is what this little ditty is about, contractors, lawsuits, and me.

Way back in the day I had a pretty sweet set up as an agency recruiter when it came to compensation on multiple fronts.  All I had to do was get three hires in a month and I would get 1% of the monthly gross from the previous month and that check was, on a  low month 5K to a really good month could be close to 10k on top of a decent salary.  It was a team effort and we all tried to help each close deals because that meant more money for the monthly billing.  It was a great system and one I would like to see more of but hey that’s a different story.  Ah, the 90’s at the height of the .com boom money money everywhere!  What every agency recruiter loves is contractors, well the ones that want a steady stream of cash in their pockets.  I was no different and I was going to find myself with a plethora of them working for us in a very short period of time.

American Express was one of our biggest clients and they did a ton of contracting or contract to hire work with us. We at one point had up to 70+ contractors working there at the height of 1997.  They worked with a number of agencies just like us and competition was always stiff since it was a lucrative contract but everyone played nice in the sandbox, well, not everyone.  I had one of my people who I had placed on contract call me, yeah, call me, we used phones more frequently back then, to tell me that a certain national agency was being sued by Amex and the managers were told that they needed to cut the contractors loose under that particular agency.  It was a very problematic for a number of managers as they had projects to complete and deadlines to accomplish.  This was notable as they seemed to always be behind and seemingly always hiring in order to catch up.  I have to say it was a bold move on their part.  I looked up information through public records and found that there was indeed a lawsuit filed in NYC and the agency was given a letter to remove its people from off-site as they were not going to pay them for them.

I made a few calls to some of my other contractors to triple verify this was happening and boy was it ever. Everyone was freaking out. My account manager and I started calling the managers we had been supporting and asked if the people they had to let go and of course the answer was YES! So, I went to my boss with an idea.  I said what if we just transfer their payroll to us, we could fill the roles with new people but why do that? You had a fiduciary problem, not a bad employee!  I went into referral mode calling all of my people and told them for every person that transferred over we would give them $500.  As a side note, yes I was smart enough this time to get permission to offer this from my boss, not like the Lily Bartender story.

It just blew up; I was getting daily calls and emails from not only my people but the people that were being referred to me. Managers who we had never worked with were calling me and my account manager. We looked to be on point to double our number of contractors in less than a month and all I could see was that bonus check and the adulation from the team for my brilliant idea. That would have been nice, like really nice. I really do not like idolization as I feel that I am a pretty humble person but a nice “well done” is always appreciated.  That, however, was not exactly the plan that the universe had for me, as I was soon to find out.

I came into the office like always ready to hit it hard and see how many new referrals had come in and excited about the seriously easy money were making until I saw the email.  The one marked urgent.

The one from a VP from Minnesota, of American Express.

It was an email demanding a cease and desist from contacting and or converting anyone from the agency that they were suing.  It made very little sense to me as one, I am not a lawyer, and two, they needed these contractors, why cut off your nose to spite your face? Yeah, this was not good.  I rang my boss and said I was sending this email to him and heading to his office so we can chat about next steps.  The owner just smiled and shrugged his shoulders, and then he called the attorneys to find out what rights we had.  This was huge for us and a great cash cow but not worth getting fined or going to jail. Neither of these things is on my bucket list, believe me.  We were nervous and we did not know that this agency had a clause restricting contractors from going back to a client with another agency.  We were in violation and they were using it to countersue AMEX.

My head was spinning at the total concept as AMEX had torn up the contract and released its own contractors.  These contractors effectively could not return to any function.  You seriously cannot make this stuff up.  We retained the people that had come on board with us but under the direction of the attorneys, we stopped bringing on any new contractors.  Eventually, the agency caved and paid AMEX back, we got to keep the contractors that made the switch and I did not go to jail. All and all it was a freaky scare but a profitable one.  The lesson is when dealing with the contract space, or any space, ask about non-competes in order to protect yourself, your company, and the actual contractor. #truestory