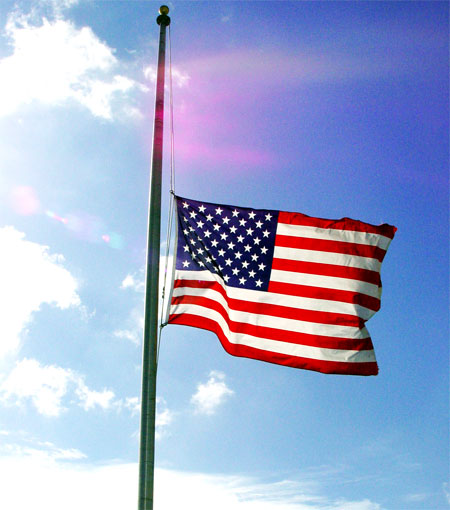 On Tuesday, September 11, 2001 I was in an office wide goals meeting at Comphealth in Norwalk CT.  I can still remember the gorgeous blue skies on my commute that day.  We all stood around the President’s desk going over recruiting goals and some awards.  Phones were ringing like they always do in a recruiting firm but our office admin took a call and stood up as white as a ghost.  “Something is wrong, a plan crashed into the twin towers”.  We all looked at each other worried by not terrified yet.  The meeting ended and we put on the TV.  People took calls from loved ones.  And the  usually busy and bustling office stopped as we all looked on.  I called my fiance who worked at a hospital in New Haven and was on the phone with her when the second plane hit the second tower.  I have never experienced real panic before on a group scale, but the office was now scared as a whole.  The rumors flew.  And it was clear that this was now more than an accident.  Then in a wave it hit me.  Eric works right down there.  Eric is one of my closest friends.  A hero to me as I watched him work so hard to follow his dream to become a lawyer and Wall street success.  I thought of my friend Kim his wife, his baby daughter McCallan and walked out the door.  I was 45 minutes drive from the ground zero yet it was hours before we knew that Eric was alive.  And hours more before we knew he was safe, riding with strangers north to Connecticut.  Eric had run outside when he was told to go back inside his building.  He ran north and kept running until he was clear.  Now, 10 years later, we still don’t talk about it.  But I do make sure I communicate with him some how.  Just a “hey buddy” is all that is needed to let him know I am so glad he is alive.

There are seldom moments in the lives of people that can define a generation.  And there are even less moments that can bring together a nation and on some scale a world around a common unified cause.  September 11th changed a lot, and a lot didn’t change that probably should have.  But this was the first time I became truly aware of a fact which I had always known, but had taken for granted:   I am an American.  I have never been so scared, so angry, so sad, and so proud as I was then.  This is a time for us all to remember those days and how it felt.  Forget the politics, the mistakes, and the blame.  Focus on how we all came together and how we honored those that gave and lost their lives that day.  Hold someone you love dearly.  Play with your children.  And, maybe put a flag out and take a moment to be thankful for all that we have.

To everyone that lost someone that day, or as a result of that day.  Thank you, we remember.