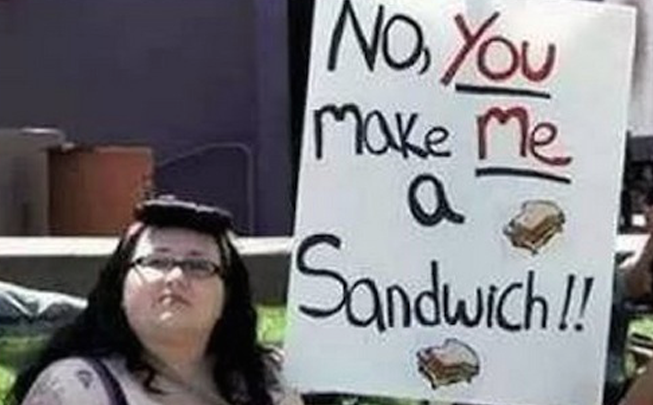 The bias behind being called a feminist is rampant. To this day, just saying the word feminist strikes fear in most men’s eyes. They look shocked and scared by the mental image of burning bras and screaming women and forget that this is an important passion point. Bottom line, women aren’t treated with the same lense and equal opportunities in the workplace, in government and now, even on social media sites.

But before I dig into the LinkedIn side of this spectacle, I have to proclaim that I, too, am a feminist. Yes, men can be feminists too. I will always advocate on behalf of women on the grounds of political, social and economic equality to men. I am honored to say that the majority of friends I have, and not just in my professional life, are women. They are some of the most intelligent, confident and charismatic people I know and they have taught me valuable lessons both personally and professionally. Not that they have to be anything superiorly special for me to believe they deserve equal rights but for some reason, they’re not always given the same respect we would all expect.

Mahatma Gandhi was quoted as saying “Of all the evils for which man has made himself responsible, none is so degrading, so shocking or so brutal as his abuse of the better half of humanity; the female sex.” Unfortunately, I think he got it right. While I know it’s rampant across all industries, it most disgusts me when I see it in our own.

The misogyny I’ve witnessed in the recruiting world blows my mind. Despite the fact that women are the majority in our industry, men are flippant and, at times, disregard women in the hiring process.  I have personally witnessed phone and in-person interviews where the candidate wants to negotiate compensation with the male manager as opposed to the female recruiter who got him through the process. In that situation and every parallel, all I can say is what the fuck.

What always concerned me about LinkedIn is the profile photo. LinkedIn put in their service agreement years ago that it had to be a picture of the person that owned the account, no cool avatars like other sites; they wanted it to be “professional.” Sure. You are supposed to be professional. They want us to approach our profiles with a certain level of professionalism and not treat the site like Facebook or Twitter.

However, over the last couple of years the site has morphed into anything but, featuring everything from political posts to cat gifs and slowly transforming into the most unprofessional network. All of that behavior has, apparently, convinced men the website is a way to contact women and proposition them from behind a screen. Match.com with a resume attached – how nice.

But no. I don’t get why these Casanova’s think they should be finding dates trolling female recruiters on a networking site.  It’s like they know that we, as recruiters, say yes to every connection to build a pipeline with, who we think, are legitimate sources for applicants or the way to one. This expectation of connection has set women up to be the target of aggressive and unwanted advances.

For example, take a look at what these wordsmiths are putting together to entice a lady.

Hi.How are you doing, Hope good? I saw your profile, so I decided to write you because I could not resist you. I must tell you that you look pretty, would you be interested in our getting to know each other over a Few Text: (number removed so we don’t kill them)

Or this short but creepiest of creepy email:

“But you must know am a Single man, who will love to start a new life. you are really a very beautiful woman and i hope to read from you soon..Allen”

I would love to interview these asshats to determine their exact thought process behind this behavior but no matter what they said, I think I’d be stumped. There’s no excuse.

This doesn’t just happen blindly online, unfortunately. Take the case of a very close friend of mine. She attended a conference and was harassed by a guy who decided to drink a few too many of those free cocktails. He spent the evening hitting on her then, I assume, praying to the porcelain throne. When he came to his senses, he decided that an InMail would be the wisest course of action to apologize.

I have a headache just trying to understand his logic and I’m a guy. I know we do stupid things. However, I cannot begin to understand this behavior. I will say my friend is as smart as she is pretty and her response was both eloquent and epic #truestory:

The real truth is this asshat used a supposedly professional networking site to ask out, and then try and apologize for, afterward realizing that using a networking site for a hookup is a tremendously stupid idea. Sadly this was not some frat boy at Stanford, but a so-called industry thought leader in social marketing. Lovely. That is the type of conference I want to attend.

“Life is hard, it’s even harder when you are stupid.” – John Wayne

All of this context is more than enough for me to rant, and you know how I love to rant. To all the guys out there that are doing this sort of thing and thinking they’re cool: STOP IT!

There are literally thousands of websites that are designed to match you to women. A brief list to save you the trouble of actually finding these on you own or using a lack of information as an excuse: Match.com, Eharmony.com, Zoosk, Tinder, POF (Plenty of Fish) and last but not least if you want to meet professional looking for love check out professional Match.com.

These sites are both on mobile and desktop and created with the intent of speaking to people who actually want to meet up with someone. Everyone on those sites is trying to meet someone as a prospective mate – not vulnerably under the impression that this site and your outreach is relevant to their job search or product hunt.

You are shaming the feminist men in the world who actually respect women. We have had enough of this bullshit, and the women that we should be championing are instead being intimidated by your craptatistic advances. I, for one, am sick of it.

I set-up a group, ironically enough, on LinkedIn so that women can add screen shots of these losers so that we begin to track how much of a problem this is. Surely LinkedIn/Microsoft will start taking the issue more seriously than they are now, right?

Sadly I’m laughing at my own naivety but here’s to hoping. #truestory