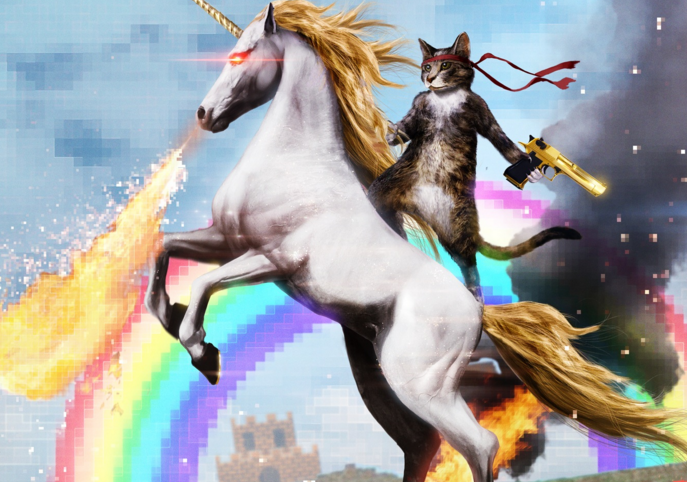 Let’s face it, if you didn’t already know unicorns shit rainbows (or cash money, as I just learned from Deadpool), and you met one, you’d think, there’s one weird ass animal. You’d take one look and run like hell (or hopefully back away slowly, that’s the smarter thing to do), because you’d be thinking, I’m face-to-face with the bastard child of a wild horse and a rhino, and those are two very sensitive animals that are very likely to get offended and impale me. And not in a good way. You wouldn’t think twice about all the rainbows you’d be missing out on.

I’ve discovered that industry analysts can be a little like unicorns: dangerous hybrids (of research wonk and critic), very sensitive and very weird looking, obviously. At least that’s impression you carry of them until one has tried the seafood lunch option at the conference you’re at and the next thing you know, you’re in the next stall over in the hotel restroom discovering they, also like unicorns, shit rainbows.

Now you’ve got posters of them over your bed, right between the “Live in the Meow” cat poster you picked up after seeing The Lego Movie and the retro Moonlighting poster you found on eBay.

Speaking of Deadpool, the tragedy of the character is that he never asks the right question. For years, he runs around in his red outfit, killing bad guys and torturing himself because he never challenges two underlying assumptions:

Check the validity of those two questions and you get a kinder, gentler Deadpool. And while that may not make much of a movie (debatable), it would save Wade Wilson from being murderously sexually frustrated. For years. Which is maybe what would have been had Wade’s best friend had been an analyst instead of a comedic bartender.

Don’t Miss that Mind-Blowing Turn About

To put a fine point on it, this is what I’m saying: don’t look to analysts for answers, look to them for questions—the right questions. When you start focusing on the right end of the unicorn for your needs, its horn stops being quite so scary.

Analysts, (like vendors, ahem), have a point of view that spans the entire industry. As much as practitioners love to learn from other practitioners, it’s the analysts (and vendors, ahem), who see across organizations. If they’re smart, they can use that viewpoint to isolate the difference between universal truth, industry trend, and organizational idiosyncrasy—knowledge that can save a company major league time and money as they shape their talent function.

For example, take the big data trend. How many HR practitioners are math wizards? We are, by and large, a group who loved math and statistics so much we ran as hard as we could into people-oriented careers. So HR touts the power of big data, but if we’re honest, very few of us have the chops to dive in and figure out what that means.

Enter the analyst. Not to slice the data, necessarily, but yes to figure out what questions to ask of the data. Because it’s not the size of the data that matters, it’s the quality of the questions you ask of it. Or, for another example, take the surprising link between Employer Branding and Employee Engagement and Onboarding.

No details here, you’ll need to listen to the podcast for this one. Except to say that if you get this right, you create a feedback loop that will take costs out of your branding and engagement processes faster that a cheese grater takes off a callous during a pedicure.

From what I hear.

Damn. That’s gross. People do that?

Sorry, having a moment. Next.

Can the analyst be tamed? Is a neighing horse? Or is it more like a braying zebra: a perpetually surly zookeeper killer?

My editor at RecruitingDaily.com is an analyst (of sorts), and he’s about as controllable as kudzu. Or wild hemp. So if he’s any guide, the analyst-as-unicorn metaphor suggests we give both a wide berth. But then…

Meet Kyle Lagunas, Analyst. And also Principal at Lighthouse Research. Which makes him the flying Pegasus of unicorns. Kyle, when he’s not destroying my metaphors, is also a phenomenal podcast guest. He knows exactly what companies should be doing to maximize their employer brands and has crisp, $100 bill-level suggestions for HR companies contemplating how to saddle up one of them analysts and riding its rainbow to the pot of gold at the other end.

Heard In This Podcast:

Kyle Lagunas is an analyst and a principal at Lighthouse, where he spends his time navigating the rapidly changing waters of HCM – with a focus on talent acquisition. Kyle keeps tabs on key practices in sourcing, recruiting, assessing, hiring and retention strategies and technologies. Through primary research and deep analysis, he keeps today’s business leaders in touch with important conversations and emerging trends in the rapidly changing world of talent. His work has been featured in Forbes, The New York Times, Business Insider, Information Weekly, and HRO Today.