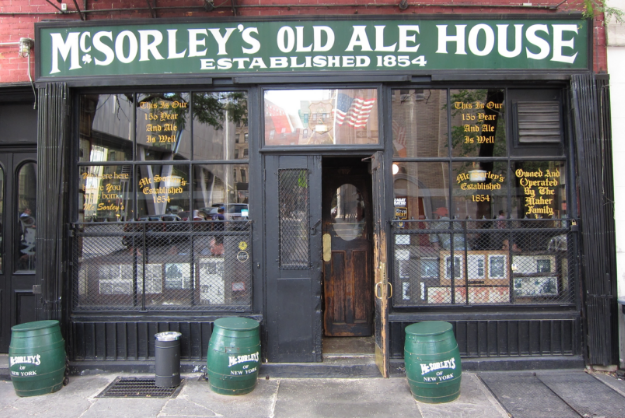 Editor’s Note: Yes, you read that right. I’m throwing myself in the hot seat and letting none other than Steve Levy interview me this week on RecruitingLive. We co-wrote this post – his comments are in italics.

We spent the day wandering around New York. On a tour from Steve Levy, you’re not going to head to the tourist traps and postcard stands. You’re heading into the New York that people who were born and raised in the city experience. The one they talk about never leaving while the rest of us look on in awe, as if they’ve completed a monumental feat saying no to the suburbs.

We made a few stops that day, stopping by the office of a fur dealer who was an old lifeguarding friend, a comic book shop that would make Derek Zeller pee his pants and a bookstore. As we wandered, we were telling stories of people we knew and places we had been. Steve told me the stories behind the artifacts and buildings, a story for every block of experiences and people. Memories that you’d likely never read in a blog post or hear on a webinar. That’s because the snoredom would cause people to gouge out their eyeballs.

As the day somehow got even warmer, we wandered into the oldest pub in New York – McSorley’s Old Ale House – near the East Village. From the outside, you wouldn’t recognize that you’re stumbling upon an artifact. Yeah, one that didn’t let in women until 1970 – thank you Barbara Shaum. A bar that, unlike most in this ever-changing city, hasn’t removed anything from the wall since 1910 and serves only two kinds of beer: light and dark. Rather than shifting with the trends and tides, this bar holds true to its roots. It’s a statue I can appreciate in a world where it feels like everything changes just because rather than for a real reason or to add value.

Steve knew the owner and bartenders by name so we were welcomed like old friends rather than guests. No need to read into this – decades of tipping well were at play. We found a table in the back (thank you Brendan) and ordered a literal handful of beers; enough pint glasses to fill our corner of the large table brought to us by a server (thanks again, Brendan) who could actually carry 10+ beers with two hands. Every time I’d look up, I’d notice something new that caught my eye. There was a story to be told. Steve’s lifeguard patch behind the bar. A framed image of every public servant who was killed on 9/11. Images of days long gone representing other’s stories.

On the floor, an inch of sawdust – another story. Speaking of another story, should we also tell folks about how you went to the women’s bathroom only be admonished by a knucklehead of the male persuasion who said, “The men’s bathroom is here”? You can read that story here.

The Story Behind RecruitingLive (And Our Switcharoo)

Just a few weeks before as I was vetting the idea for RecruitingLive, Steve was one of my first calls. It’s my firm opinion that when starting something, you need outside opinions and when it comes to content – Steve is one of the few people I trust.

Translation: I know he’ll tell me if he thinks it’s a stupid idea.

After briefly explaining, he simply said “you have to. I can find people.” I was right and just two weeks later, there was RecruitingLive with our first guest Amy Miller. After a few beers in McSorley’s, I had another idea. One I perhaps should have considered while sober but I went for it. “Maybe you should interview me for my birthday.”

Famous last words. I was already pondering how many times I can use ‘gay’ and ‘recruiting’ in the same sentence.

Steve, of course, jumped on the idea. I could see the almost child-like excitement in his eyes as the questions he would ask started to swirl around in his head. How many times have you wanted to smack Charney upside his head? If you know anything about Steve, you know those questions aren’t as simple as “what’s your favorite sourcing tool” but rather things that dig into my psyche and show the person he knows offline, not the one who’s behind the articles. If you were a Chrome Extension, what would you be?  They’re the ones that dig into the human side, not the side someone interviewing me for a role might never consider. They’re the ones that make him the respected recruiter he is today.

So, as a woman of my word, we’re making it happen. Steve is joining me on this week’s #RecruitingLive to turn the tables. He’ll be our host and I’ll be the guest sharing my thoughts on, well, whatever Levy wants to ask.